Police in London have shown off an extravagant £130,000 Batmobile-style car, but won’t be using it to fight crime on the capital’s violence-ridden streets.

The flashy car, an eco-friendly hybrid BMW i8, patrolled the roads near the Met’s headquarters yesterday as part of the police’s efforts to prove it is obeying the city’s controversial new Ultra Low Emission Zone.

The ULEZ, introduced by Mayor Sadiq Khan in April, punishes older petrol and diesel cars for driving in certain parts of London. 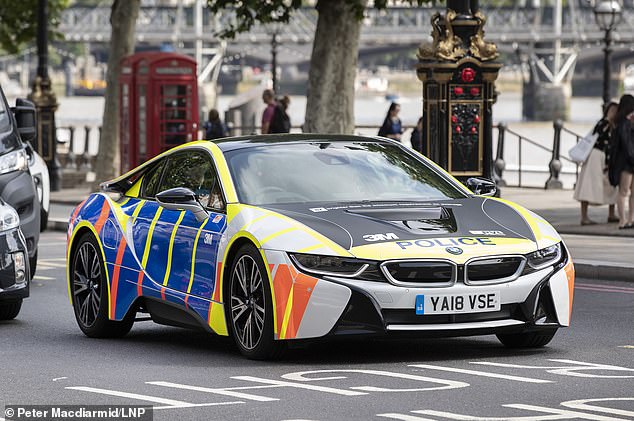 A police BMW i8 sports car drives near Parliament. It won’t be used to fight crime on the capital’s violence-ridden streets

German car manufacturer BMW loaned the car to the Met, which can reach a top speed of 155 miles per hour.

Former Detective Chief Inspector Mick Neville told The Sun: ‘Too often, senior police officers forget the role of the police is to prevent and detect crime – not virtue signalling about fashionable causes.

‘The Met should be more focused on reducing the murder rate rather than worrying about environmental targets.’ 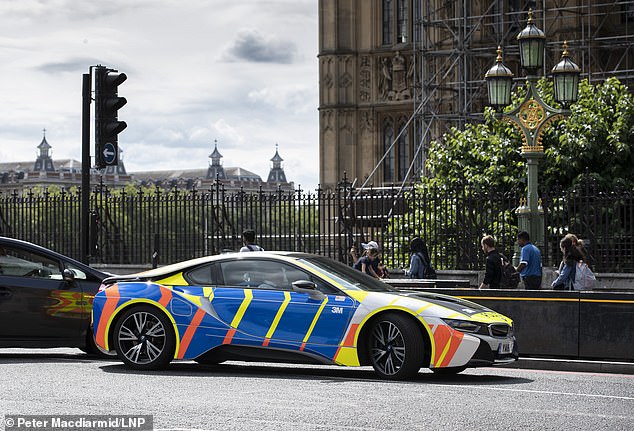 A spokesperson for the Met said: ‘The vehicle was provided at no cost to the Met, including the livery

Last month the Met was accused of wasting £10 million on ‘leadership training’. 10,000 officers and staff attended a five day course which involved taking tests to tell them what ‘colour’ their personality is.

Knife crime in England and Wales currently stands at its highest level since records began, with almost 44,500 offences last year, while murder and manslaughter reached a ten-year high in 2018, when 732 people were killed.

A spokesperson for the Met said: ‘The vehicle was provided at no cost to the Met, including the livery

‘The Met is raising awareness within the organisation of different vehicles with the technology available to meet the Mayor’s environmental requirements for London. There is no intention for the Met to purchase these vehicles for policing London.’