As Victorians bunker down for another stint in lockdown, and NSW continues to grapple with its persistent outbreak, it’s clear that for all the improvements to hotel quarantine, contact tracing and increased testing capacity, the battle to keep the virus at bay is as fraught as ever.

We have been through a week’s worth of furious politicking, but when we step back and look beyond our troubles we see a world continuing still in the grip of this pandemic. One statistic stands out. More people have been infected and died from COVID-19 so far this year than during all of last year. When you take into account that more than 3.5 billion vaccine doses have been administered since December, that is a reminder of the threat COVID-19 still poses to much of the world. 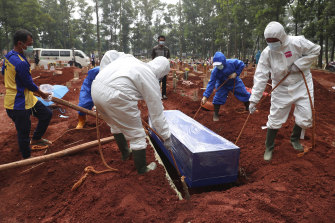 Workers in Indonesia lower a coffin of a COVID-19 victim into a grave. The nation has recently been hit hard by the pandemic. Credit:AP

At the heart of the problem is B.1.617.2, better known as the Delta variant. First detected in India in December, it has since rapidly spread to more than 110 countries, wreaking havoc along the way. Over coming months, due to its highly infectious nature, it is expected to be the dominant strain around the globe.

When the pandemic hit its peak in late April this year, it was in large part driven by the Delta variant in India. The global figures have mostly fallen since, but the latest weekly World Health Organisation update revealed that nearly 3 million new infections were reported worldwide during the previous seven days, a 10 per cent increase week on week. And with another 56,000 new deaths reported during the same period, the cumulative total has now topped 4 million.

While those numbers give a sense of the scale, what they miss is the extent to which the world is dividing into those vaccinated and those unvaccinated. With the vast majority of vaccine doses going to a small number of wealthy nations, most of the world’s population faces a much higher risk of illness and death.

That means while people who have been fortunate enough to be fully vaccinated can largely feel confident they will not become ill or worse, those unvaccinated, particularly where the virus is still rampant, face a particularly dangerous time. Even in nations that have relatively high vaccination rates, such as Israel and the US, the Delta variant is rapidly spreading through areas where fewer people have received a dose.

With about 30 million doses being administered globally each day (a third of which are given in China), it will take at least another nine months before 75 per cent of the world’s population is protected. The hope is the vaccine rollout will accelerate as more vaccines are approved and the manufacturing and distribution capacity is expanded.

Never before have we had a better understanding of a virus that has resulted in a pandemic. The remarkable speed at which vaccinations were developed, and the measures put in place to contain and keep track of the virus’s spread, have saved tens of millions of lives. During the Spanish flu pandemic that began at the end of World War I, at least 50 million people died out of a population that was less than a quarter of what it is today.

But as Australia and the rest of the world is discovering, for all the advantages medical breakthroughs have delivered, navigating a path through this pandemic is still an enormously challenging exercise. There will be few individuals anywhere who will live through this time unscathed. As Melbourne begins lockdown 5.0, it has suffered more than most in Australia. But when you look abroad, you realise we still have much to be grateful for.

Gay Alcorn sends an exclusive newsletter to subscribers each week. Sign up to receive her Note from the Editor.