Lock up your Koi carp: Owners have been warned to barricade their garden ponds after hungry otters steal expensive fish on night raids

Fish owners have been warned to barricade their garden ponds – after thefts by hungry otters.

Wiltshire Police sounded the alert this week after a string of reports of fish being taken.

Katie Spragg yesterday told how she had lost up to 30 white goldfish and koi carp to the animals.

The 58-year-old personal assistant said: ‘I initially thought the heron was somehow getting them. Then one autumn evening I heard splashing in the pond.

‘When I looked over the raised pond wall I saw an otter sauntering along the edge of the water. It disappeared into undergrowth and I just stood there in shock.’ 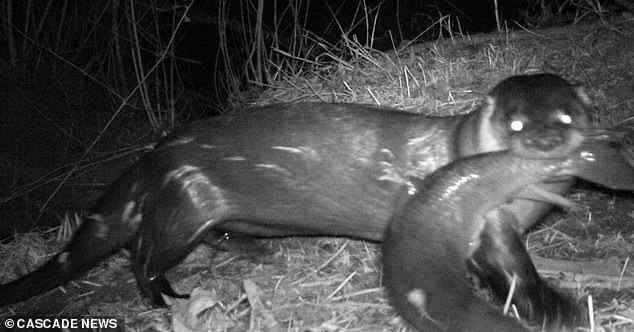 Wiltshire Police sounded the alert this week after a string of reports of fish being taken. An otter is seen taking away a prized carp

Police in Corsham, near Miss Spragg’s Chippenham home, have suggested people use welded mesh or a 4ft wire fence to cover private ponds.

‘We appreciate this is not a police matter but the fish are worth a lot of money,’ local officers added on social media.

Otters, which are protected by law, were almost wiped out in the 1960s due to the use of pesticides. They are making a comeback thanks to cleaner water, better fish stocks and changes in riverbank management.

Miss Spragg said she and her partner Tim Collyer, 60, built a protective frame after their first brush with the otters in 2020.

‘We still see otters come into the garden to check out the pond,’ she said. ‘But they slink away again disappointedly.’

The sixth national English otter survey to monitor the animals is running until January 2023, managed by the Mammal Society. Volunteers have until the end of next month to register.