A live-in carer ‘just snapped’ and beat up a paralysed 89-year-old grandmother after drinking eight cans of Stella and smoking cannabis.

Pavla Dolanska, 36, was jailed for almost two years at Bristol Crown Court for the brutal attack which left Doris Radford with injuries that another of her carers described as ‘shocking and sickening’.

She was close to receiving a suspended sentence from the judge hearing the case who was told of the incredible strain of looking after the ‘challenging’ Mrs Radford for weeks-on-end during the Covid pandemic which left the carer at breaking point.

Mrs Radford was paralysed because of a spinal chord injury, had suffered a stroke, was bed-ridden, non-communicative and suffered from advanced dementia.

She was looked after round the clock at her home in Filton Avenue, Horfield, with a team of carers sharing the shifts.

For two years until the night of the attack, one of that team was Dolanska, a carer from Czechia who was in the UK to earn money to help pay off her father’s debts, and for her son, now nine-years-old, who she shared custody of with her ex-partner.

On the evening of April 17, 2021, Dolanska was Mrs Radford’s sole carer overnight, a role she had throughout the lockdown. 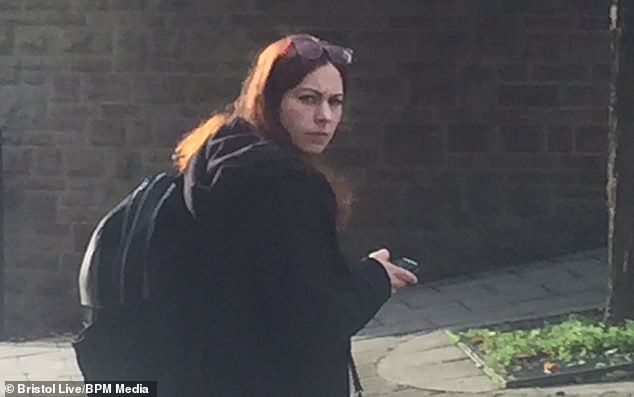 Pavla Dolanska (pictured), 36, was jailed for almost two years at Bristol Crown Court for the brutal attack which left Doris Radford with injuries that another of her carers described as ‘shocking and sickening’

That evening she visited local shops twice and bought a total of eight cans of Stella Artois lager and also consumed cannabis.

At around 1am she sent a text message to Kelly Cutler, who cared for Mrs Radford during the day, saying she ‘needed help’.

The court was told the entire right side of her face was purple with bruising, she had lacerations around her eyes and nose, finger imprint bruises on her shoulders, blood all over her pillow and a head injury from blunt force trauma that a later CT scan revealed caused a fluid collection around her brain.

Ms Cutler later received the text message and replied, before quickly arriving at the home where she discovered the scene of violence.

‘The defendant told her she had beaten up Mrs Radford, so she went to see and what she said she saw she described as shocking and sickening,’ said Ehsanul Oarith, prosecuting.

‘She was in bed with bruises and lacerations and in visible pain. The defendant herself looked like she was regretting her actions, and Ms Cutler called the police.

‘The police took photos of Mrs Radford while she was still in bed and being attended to by paramedics, and she was taken to hospital the same day,’ he added. 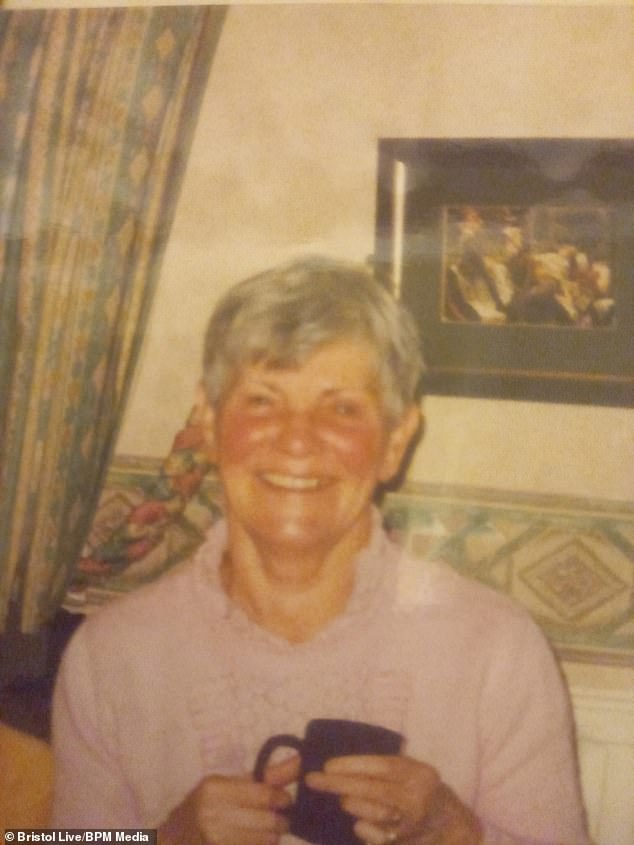 Mrs Radford (above) was paralysed because of a spinal chord injury, had suffered a stroke, was bed-ridden, non-communicative and suffered from advanced dementia

Mrs Radford never returned to her home in Bristol. She was first taken to hospital and treated for her injuries and remained there due to other health reasons.

She was discharged a week or so later to a care home, but because of Covid-19 was placed initially in an isolation room.

She stopped eating and drinking – something she had done before – and died six days later, some 17 days after the attack, on May 5.

The coroner at her inquest found no link between the injuries she sustained and her cause of death.

Dolanska, 36, had pleaded guilty at her first appearance before magistrates last month, admitting a Section 20 charge that she unlawfully inflicted grievous bodily harm on Mrs Radford, who had worked at BOAC and Rolls-Royce in Filton for many years before her retirement.

Prosecuting, Mr Oarith said Dolanska initially told police at the scene that she had ‘snapped’, but in a later interview said she could not remember what happened because she had drunk eight cans of Stella and smoked cannabis.

‘In police interviews she did not accept that she was responsible even though she was the only person in the house at the time.’ 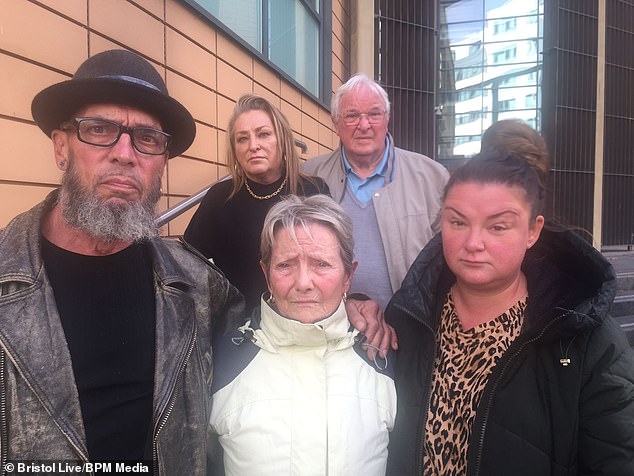 The family of Doris Bradford, after Pavla Dolanska, pleaded guilty to wounding with intent to cause GBH on Mrs Bradford, 89, of Filton Avenue, Bristol, on April 18, 2021. Left to right: Joseph Milton, Lorraine Milton, Daphne Bassett, Mansell Bassett and Leah Milton

Defending, Mandla Ndlovu told Judge Moira Macmillan that Dolanska had been under incredible stress at the time of the attack.

‘Miss Dolanska was hit by a cavalcade of catastrophes which left her exhausted, stressed, anxious, distressed and depressed,’ he said.

‘Pavla Dolanska worked for two years with Mrs Radford. Caring for her was not without its challenges.

‘Initially, she would work one week on and one week off, then the pandemic struck, slowly her shift pattern changed and began to increase to two weeks on with two weeks off to recover.

‘She did try to approach her employer but there were no bodies to relieve her,’ Mr Ndlovu said, adding that she was working as a carer here to meet the financial needs of her father’s debts and for the upkeep of her son back in Czechia.

‘The increase in workload of course meant less time to see him. Then her father was diagnosed with leukaemia, so she spent all her time waiting on phone calls from him.

‘But the most acute issue was the screaming at all hours of the day and night. Mrs Radford was very verbal, shouting out often the same word in a loop, and Pavla Dolanska would struggle to get any sleep, and had by this point become quite sleep deprived. 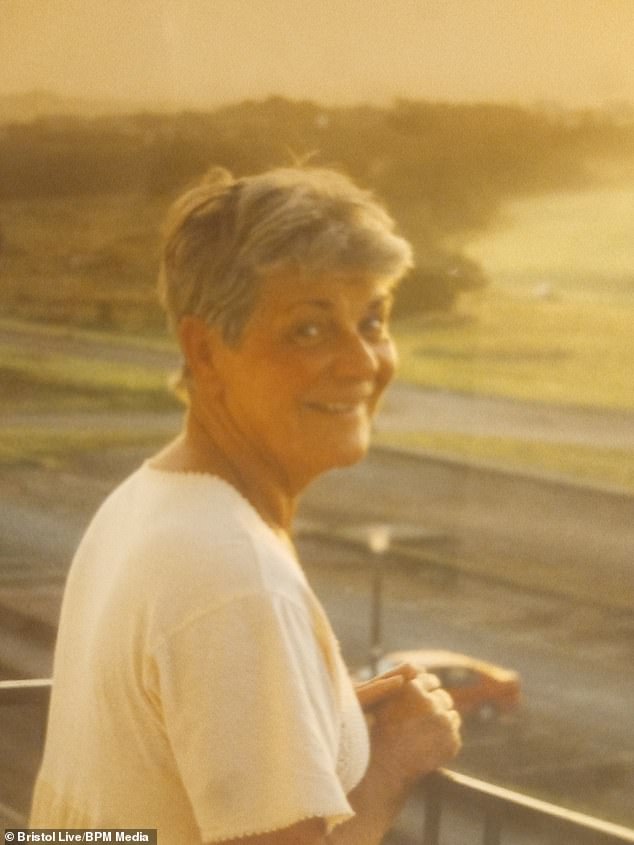 Mrs Radford was looked after round the clock at her home in Filton Avenue, Horfield, with a team of carers sharing the shifts

‘She then foolishly turned to drink and cannabis to self-medicate, and get some sleep, which was an incredibly stupid thing to do,’ he added.

‘So that night, in a haze of depression and anxiety, she has attacked Mrs Radford.’

Judge Macmillan initially sentenced Dolanska to two and a half years in prison, then reduced it to one year and eight months because of her early guilty plea.

The judge said she had considered, given the mitigating factors in the case, that Dolanska be given a suspended prison term and a community sentence, but the aggravating factors were too great in the case.

She told Dolanska the earliest she would be released is in ten months, with another ten months of her sentence to serve in the community.

The judge told Dolanska the case ‘reflects the terrible situation you found yourself in’.

‘Doris Radford had reached the stage in life where her behaviours were very challenging, with just a repeated single word quite often screamed out loud,’ she said.

‘The extent to which her noise was an issue is shown by a statement from the neighbours, who said they could hear yelling in the night and it affected their son.

‘During Covid, you became part of her household, and that must’ve been very difficult for you, but you were someone trusted with caring for her,’ the judge told Dolanska. 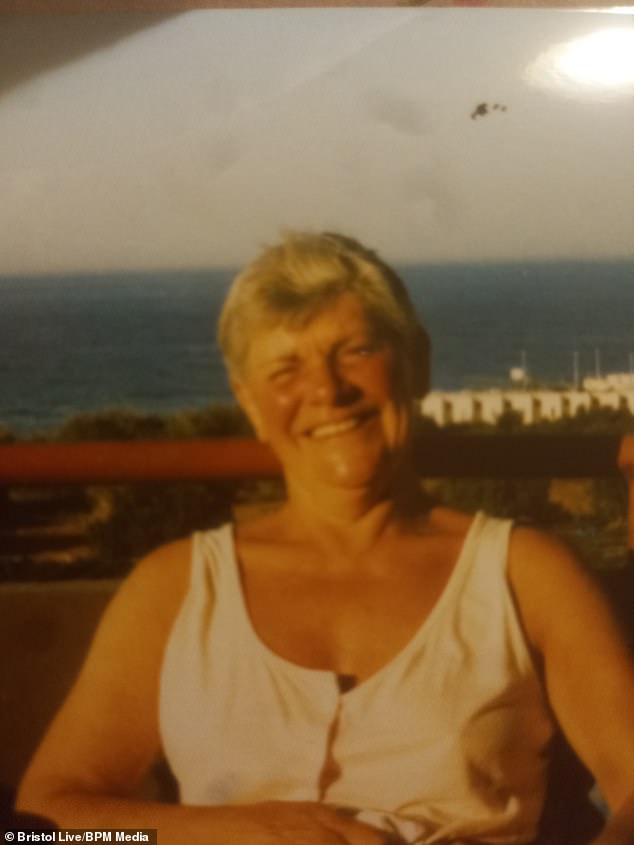 On the evening of April 17, 2021, Dolanska was Mrs Radford’s sole carer overnight, a role she had throughout the lockdown

‘On the night in question, her shouting had become particularly intrusive, and the neighbours said it was louder than usual.

‘On this day you reached rock bottom, but did not contact your employer, because you felt it wasn’t worth trying.

‘You made two journeys to the shop and bought eight cans of beer and you accept you snapped.

‘Ms Cutler said she was left sickened and shocked by seeing the injuries, and the photos are shocking, especially because Doris Radford was only able to lift one arm to scratch her nose, so would have been defenceless,’ the judge said, adding that Dolanska had expressed remorse for her actions.

‘You expressed genuine remorse – you told the probation officer that you will carry the guilt with you for the rest of your life,’ she added.

Dolanska was taken down to the cells after the sentencing, and outside the court, Mrs Radford’s son said he was glad she had been jailed.

‘I’m glad the sentence was not suspended. I would like it to have been longer,’ said Joseph Milton.

After an earlier hearing at which Dolanska pleaded guilty, Mr Milton, who lives overseas, said: ‘She had two sons and a step-daughter, and she was a beautiful person, she was genuinely lovely and always tried to help everyone else.

‘She worked at Rolls-Royce and BOAC for many years. She went into hospital with her injuries from the attack and never came home again. I am still distraught at what happened,’ he added.