This night belonged to the young. At the stroke of midnight they were rolling down Chapel Street, in doofmobiles rather than pumpkins, windows down, bass pumping, horns blaring. Yeah, baby; we’re back.

Are you going anywhere in particular, I asked a carload of twentysomethings as they waited for the lights to change.

“We’re not going anywhere, we’re just going,” said the girl in the front passenger seat, delirious with excitement. “All gas, no brakes,” added the bloke behind her. As they took off, he poked a little red horn through the window and gave it a blast. Toot-toot, chugga-chugga. 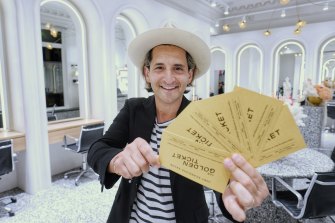 Hairdresser Joey Scandizzo was inundated with entries after offering five golden tickets to a midnight makeover at his South Yarra salon.Credit:Luis Enrique Ascui

At Chappelli’s, the line snaked around the corner, and George Leveque cursed the fact he couldn’t have 50 people in the cavernous space inside and 20 at the cramped outdoor tables rather than the other way around. “We’re fully booked, with 19 people,” he said. “We’re open 24 hours, but tonight it’ll probably die out after about 1. It’s like New Year’s Eve, without the fireworks. It’s exciting, but there are a bit of nerves too.”

On Toorak Road, hairdresser Joey Scandizzo was marvelling at the success of his snap decision to offer five golden tickets via Instagram in a Gimme Gimme Gimme a Makeover After Midnight competition on Monday. “We thought maybe we’d get 100 entries, and we got 7000, which is huge. It just shows how many people are hanging to get back into a salon and get their hair done.”

Nineteen-year-old Finlay had come from Mordialloc to claim her prized spot in the chair, and not even the prospect of a couple of hours of the same ABBA song playing on repeat could dim her enthusiasm for what lay in store. “I’m in desperate need of some zhoozhing right now,” she said. “My hair’s just too long at the moment. It’s disgusting.”

Paige, 29, had no idea how she was going to spend her winnings. “I’m going to let them choose,” she said, indicating the hairstylists. “I honestly don’t care. It’s been so long since I’ve had a haircut – just go crazy. I’m just excited to get my hair done.”

“It’s been so long since I’ve had a haircut – just go crazy. I’m just excited to get my hair done.″⁣ 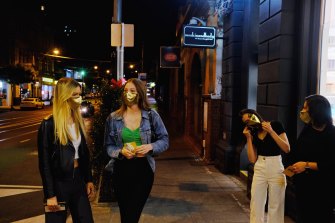 Waiting for my mane: The winners wait to have their lockdown hair blues washed away.Credit:Luis Enrique Ascui

At Richmond’s Swan Hotel, owner Jon De Fraga was keeping an eye on the queue, making sure people scanned in and provided proof of their vaccination status, and wondering how he’ll cope if and when capacity lifts above the 70 customers – 20 inside and 50 outside – he’s currently allowed.

“We thought we’d open it up for bookings and see if there was any interest and it sold out within 20 minutes,” he said. “We’re booked out for the next two or three weeks, in two-hour slots.”

″⁣We’re booked out for the next two or three weeks, in two-hour slots.” 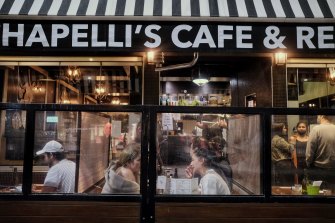 Before lockdown, he had 100 staff at this pub on the corner of Swan and Church streets and the nearby Public House, renovated at a cost of about $4 million just before lockdown number one. But now half of them are gone, either back overseas or out of the industry.

“Everyone’s battling for chefs, front-of-house people, everything,” he said of the labour shortage that could prove much more of a brake on hospitality’s recovery than people’s desire to go out. “Last time we had to train up 17-year-olds who didn’t know the difference between a beer glass and a champagne glass, and we’re going to have to go through all that again.”

In the CBD, one of the few upsides of lockdown became quickly apparent: no traffic, and no trouble parking. It wasn’t a ghost town – the garbage trucks and construction crews made sure of that – but the joint wasn’t exactly jumping either.

Italian chef Nicola Dusi had decided on a whim to open his restaurant The Hardware Club, purely for walk-ins; around 1.30am, he still had a scattering of diners sitting at the tables outside in the laneway, eating pasta and cannoli, and he was delighted to have been feeding real live customers after three months of deliveries only. “We have lots of regulars, and it’s so nice to see some of them here again.” 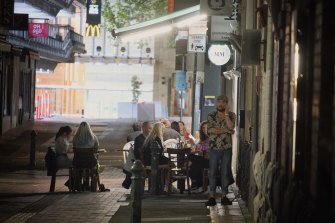 On Franklin Street, the Captain Melville – built in 1853 and a contender for the oldest continually operating licensed premises in Melbourne – had opened its upstairs bar, Lock and Key. It’s a gorgeous room with a lovely balcony from which to bask in the sounds of round-the-clock construction across the road.

Katie Rowe, a young theatre producer who lives in Carlton, is a regular here; her housemate Eamon works behind the bar, and was kicking back after a 10-hour shift preparing for this re-opening.

″⁣Dude, I’m over the moon … you just miss the people.”

“Dude, I’m over the moon,” he said. “You just miss the people; most of them are regulars in the hospitality industry who come here after they finish work.” 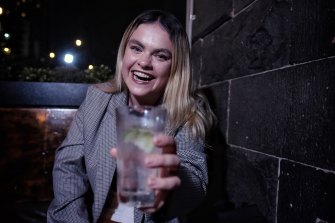 Here’s to you, and you, and you: Katie Rowe relishes connections with strangers. Credit:Luis Enrique Ascui

For Rowe it’s not the regulars she’s craved so much as the new faces. “I’ve missed interacting with people I don’t know, the exchanges you have with strangers in a line, all the little connections with people. I feel all the theatre that comes out of this is going to be poignant because we’re all craving that connection.”

“I’ve missed interacting with people I don’t know, the exchanges you have with strangers in a line, all the little connections with people.″⁣

In the laneway outside the Melville, 20 or so people waited to get in, and the guy at the front of the queue told me he’d been here an hour and a half already. “I’ve been waiting 12 weeks, so what’s another couple of hours,” he said cheerily. 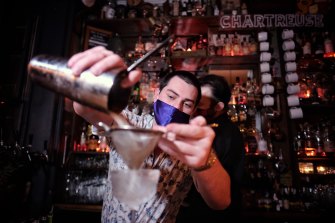 People enjoying drinks at the Captain Melville in the early hours of Friday.Credit:Luis Enrique Ascui

“We’ll be open to at least 5, so some of them we’ll be able to get in,” owner Paul Scanlan said. “I don’t think many people who are here tonight will be going to work tomorrow – or if they are they’ll be going straight to work.”

The morning will belong to the workers, to the commuters and shoppers, and the rest of us who will finally begin making our way – some tentatively, some with a leap – into our waking city again. But this night, these first heady hours, rightly belonged to the young.