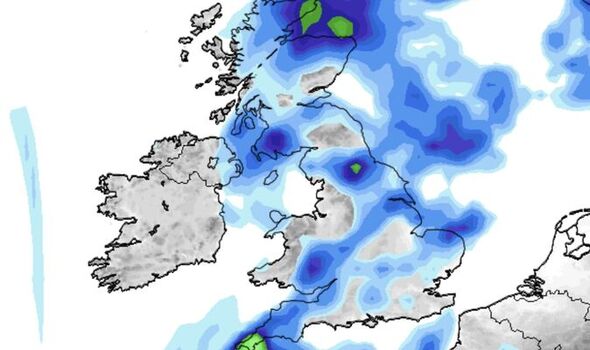 Rain-bearing low pressure from the Atlantic will obliterate high pressure responsible for driving excruciating heat this month. Temperatures will go into freefall through the coming days, plummeting 20C in parts and into single figures overnight.

Although torrential downpours will dump inches of rain across the UK, parched Britons are warned it will do nothing to fend off imminent hosepipe bans.

Torrents of water will run in rivers from bone-dry ground, doing nothing to replenish parched rivers, reservoirs and ground water supplies.

Jim Dale, meteorologist for British Weather Services, said: “The difference from the weekend to where we are going this week is going to be huge, and the change in weather patterns could spark some chaotic weather events.

“I expect thunderstorms and a significant deluge, so people should look over their shoulders through the week as hot weather gives way to tropical deluges.

“However, the rain will not permeate the ground, and there is a real danger it will simply run off into roads, villages and houses causing some real issues with flooding.”

High pressure will retreat back to the Azores, while low pressure edges in from the Atlantic, he said. 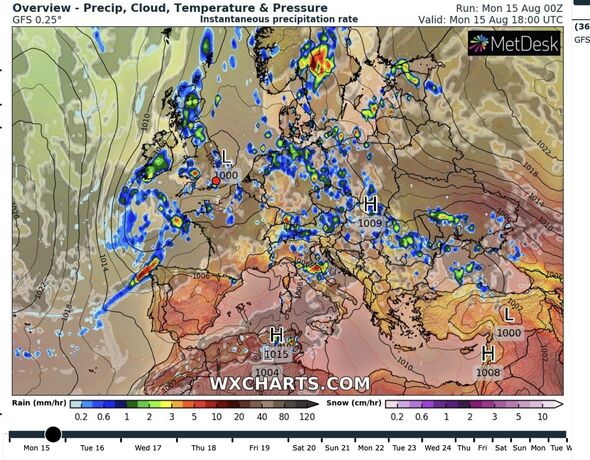 Monday morning will see the start of the ‘breakdown’ while the south and southeast cling on to the last of the heat, he added.

He said: “Showers will start to move into northwest Scotland before Monday morning starts to see the breakdown of the heatwave setting in across Wales, and north-west England.

“It will be sporadic, though, to start with, and not widespread.

“The Azores High will be pulled back and we will end up with low pressure.”

The Met Office has issued three days of thunderstorm warnings–the entire UK is at risk today, with England under a yellow warning tomorrow, and just the south on Wednesday.

The alerts warn of travel problems due to spray and flooding, risks to homes and businesses, and train and bus cancellations.

Britons are also warned of power cuts and lightning strikes with up to two inches of rain expected in a few hours.

Met Office meteorologist Aidan McGivern said: “There is a strong signal that we will see some rainfall through next week for both the south and the north, and with low pressure in charge it will be increasingly showery with some heavy rain at times.” 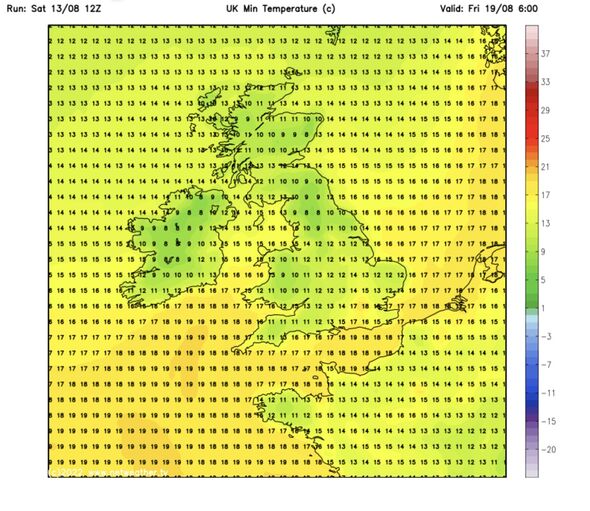 The Met Office’s Tom Morgan added: “There is an increasing chance of thunderstorms, and these will become more widespread by the early part of the week as low pressure takes charge of the weather.

“It is a much more unsettled picture by Tuesday with heavy downpours and thunderstorms in many places, but it will turn fresher with temperatures returning closer to average.

“It will turn gradually fresher with an increasing risk of thunderstorms, and where we see those thunderstorms there will be a risk of flash flooding.”

The country will start to cool from the north down, while London and southern Britain wait a bit longer for release from the heatwave. 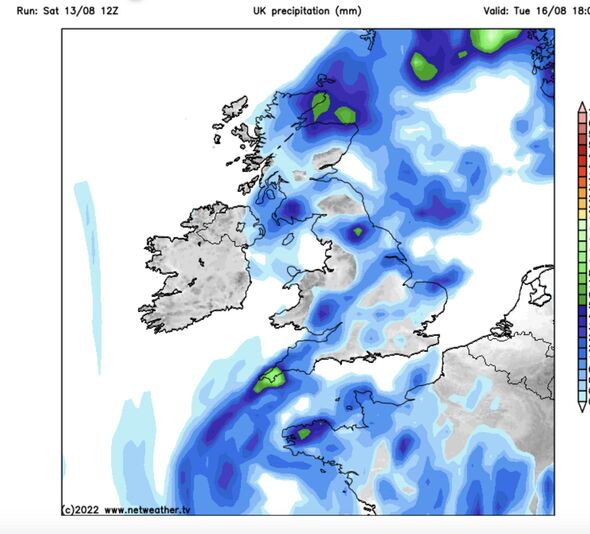 James Madden, forecaster for Exacta Weather, said: “The start of the week will bring the start of a more changeable theme and a widespread littering of thunderstorms will start bubbling up across large parts of the country.

“The more noticeable change will initially be across parts of the north, which will be first to get the cooler temperatures.

“A noticeable drop in temperatures will follow for the south, but it will stay warmer than usual for the time of year.”