DeadHappy posted an advert on Facebook with an image of Shipman alongside text which said: ‘Life insurance: Because you never know who your doctor might be’.

Hundreds of victims are said to have died at the hands of GP Shipman in Hyde, Greater Manchester in the 1990s.

In 1999 Shipman, then 52, was convicted of the murders of 15 of his patients. But further inquiries found evidence he may have killed more than 250 victims during his medical career, 80 per cent of who were elderly women. 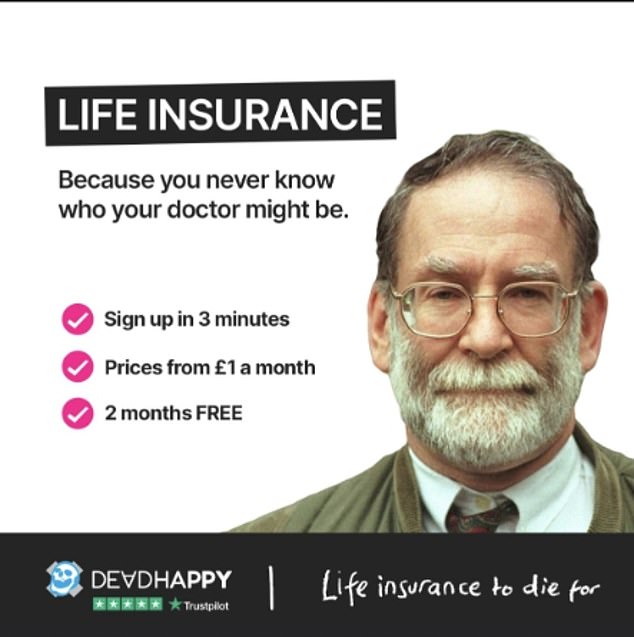 Many expressed shock after the advert appeared online, describing it as ‘disgusting’.

‘As someone whose relative was murdered by Harold Shipman, your latest advert utilising his image is despicable and unacceptable,’ one tweet said.

DeadHappy’s founder apologised and said sometimes as a brand they may ‘step over the line’.

Kathryn Knowles, founder of insurance broker Cura, told the Telegraph she would report the ‘absolutely disgusting’ advert to the Financial Conduct Authority, as well as the advertising watchdog.

She said people within the industry were ‘absolutely appalled’.

‘I just don’t see how anyone in their right mind could have thought this was the right thing to do,’ she said.

She asked why the company would put relatives of Shipman’s victims, some of who are still alive, through that.

‘WOW. DeadHappy way to get people talking about your product. Shame it included a mass murdering Doctor,’ one wrote on Facebook.

Another tweeted: ‘So- @DeadHappy you’re really going with this ad, with the tagline ‘life insurance to die for’?

Many have hit out at the advert, saying there’s a ‘limit’ to advertising and saying it’s not funny

‘Seriously? I’m all for adverts pushing boundaries, but there’s a line. And you’ve gone way past it. And you know you have.’

One shocked critic wrote: ‘@deadhappy what on EARTH were the marketing team thinking using this as your advert? You should be ashamed of yourself! Those poor families :(.’

DeadHappy founder Andy Knott reportedly accepted the advert was ‘provocative’ but said the motivation was to raise awareness of the need for life insurance.

‘It is our intention to make people stop and think. If however you have been personally distressed by this advert we do sincerely apologise,’ he told the Telegraph.

‘We do take risks with our brand and sometimes we may step over the line, whatever or wherever that line may be, and whoever chooses to draw it.’

MailOnline has reached out to DeadHappy for further comment.

As a GP, Shipman presented himself as a pillar of the community – but in reality, he used his position as a doctor to murder hundreds of people over 20 years.

He received 15 life sentences with no parole and was incarcerated at Durham Prison.

Shipman was then moved to Wakefield Prison in June 2003.

The Advertising Standards Authority has also been approached for comment.