Beijing: The first summit in a decade between the leaders of North and South Korea, and the first ever on South Korean soil, saw denuclearisation “seriously” discussed, along with a peace treaty.

The meeting lasted an hour and a half on Friday morning. After it concluded, details of a joint statement, which was due to be read out by North Korean leader Kim Jong-un and South Korean president Moon Jae-in at a signing ceremony, were negotiated by officials from the two sides. 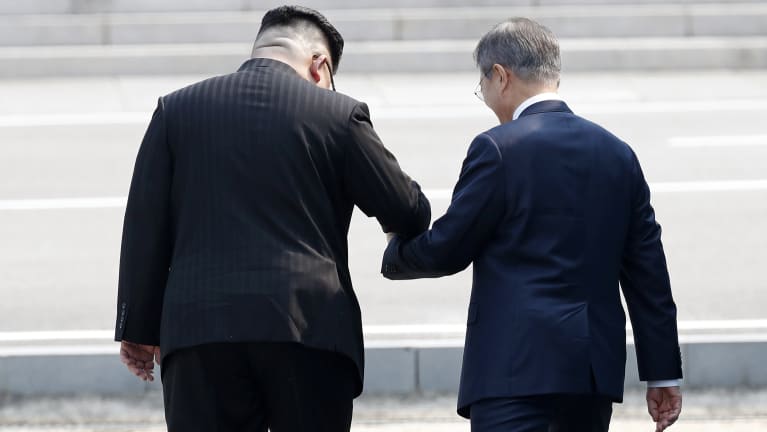 North Korean leader Kim Jong-un leads South Korean President Moon Jae-in across the military demarcation line to the North side of the border.

Kim returned to the North Korean side of the border after the meeting for lunch in his armoured Mercedes Benz, with a dozen body guards running alongside, but returned in the afternoon for a tree planting ceremony. Kim and Moon then took a walk along a blue timber bridge away from their aides, stopping to talk in private for an extended period.

Kim’s wife Ri Sol-ju made the journey across the border for dinner.

The first handshake between the two leaders, after Kim became the first North Korean leader to cross the border since the end of the Korean War in 1953, was watched around the world.

Moon had said in televised comments at the start of their meeting at Peace House: “The moment Chairman Kim crossed the Military Demarcation Line, Panmunjom became a symbol of peace, not a symbol of division.”

The US, China and South Korea have maintained that the goal of any talks must be denuclearisation.

In an abrupt change, Kim last month said he would agree to discuss denuclearisation, but wanted a security guarantee in return and the removal of military threats against North Korea.

That offer prompted US president Donald Trump to agree to meet Kim in person. The meeting is likely to happen in June. 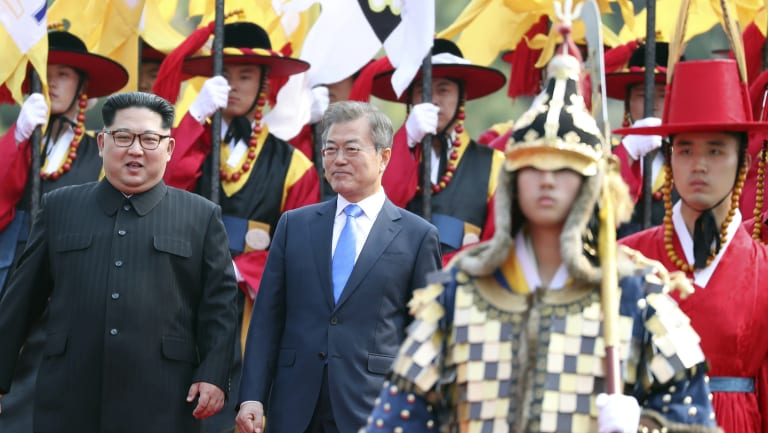 The pair walk together through a honour guard.

At a secret meeting in Beijing with Chinese president Xi Jinping four weeks ago, Kim reportedly said “achieving denuclearisation of the peninsula is our consistent position”, but he added that South Korea and the US needed to take “simultaneous measures to achieve peace”.

The Chinese foreign ministry said China applauded the historic steps taken by the leaders of the two Koreas and hopes the meeting will usher in a new chapter of long-standing peace.

White House spokeswoman Sarah Huckabee Sanders said: “We are hopeful that talks will achieve progress toward a future of peace and prosperity for the entire Korean Peninsula”.

The US had close coordination with its ally South Korea “and looks forward to continuing robust discussions in preparation for the planned meeting between President Donald J. Trump and Kim Jong-un in the coming weeks".

There is speculation this may include a request for the US to withdraw its military from the peninsula.

South Korea was reportedly prepared to offer a formal peace treaty to conclude the Korean War, rather than the armistice agreement which is currently in place.

Until now, North Koreans had celebrated each successful missile launch and were told the program was needed to guarantee their safety against America.

North Korean media had pitched the shift in policy as Kim choosing to focus on boosting the economy, now that the country had risen to the status of a political and military powerhouse.

North Korea's economy has been severely affected by ramped up sanctions, and the determination of China to enforce them.

However Kim has not said anything publicly in North Korea about denuclearisation, or about dismantling weapons.

His journey to South Korea on Friday was front page news in North Korea’s state newspaper.