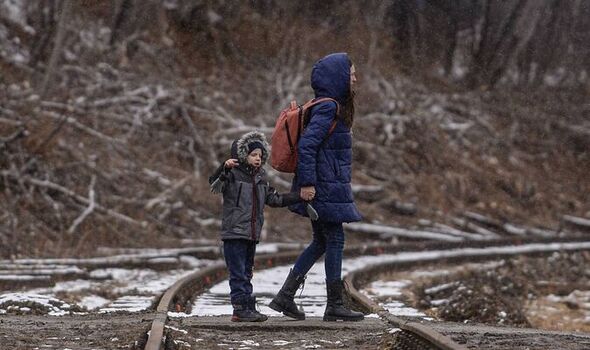 Putin’s forces have resorted to indiscriminate bombing of civilian areas – leaving hundreds dead, including children. A total of 406 Ukrainian civilians, including 27 kids, have died since the conflict began, the UN Human Rights Agency said.

Later yesterday, Olena Zelenska, the wife of Ukrainian PresidentVolodymyr Zelensky, said 38 children had been killed. Almost 1,000 youngsters have been wounded.

As many as a million children have fled Ukraine, according to the Disasters Emergency Committee. A growing number of these children are arriving on their own, without family support.

In the besieged eastern city of Sumy, at least 21 people – including two children – lost their lives when airstrikes hit civilian areas overnight. A shocking image of a bloodied little boy injured in the attack was released by Ukraine’s parliament.

Ms Zelenska said: “When people in Russia say that their troops are not hurting the civilian population, show them these pictures.”

Dmytro Zhyvytsky, who leads the Sumy Regional Military Administration, said the Russian warplanes carried out the strikes shortly before midnight. He wrote on Facebook: “The kids are being killed. We will never forgive this!”

In Okhtyrka, a small city close to Sumy, seven-year-old Alisa Hlans was one of six people killed when her school was hit by Russian cluster bombs.

Her grandfather tried desperately to protect her from the blast but he was killed in front of her. She died in hospital.

Shocking pictures from the scene showed bodies around the entrance as staff and children tried to escape the building.

Ms Zelenska, writing on Instagram about the attack, said: “The Russian occupiers are killing Ukrainian children. Consciously and cynically.”

In the village of Shybene, around 40 miles from Kyiv, 10-year-old Anastasia Stoluk, also known as Nastya, was reportedly shot dead by “drunk” Russian soldiers in front of her uncle as troops blasted houses.

She was buried in the family’s back garden after soldiers banned her mum from going to the cemetery, her cousin Anya said.

Anya’s adoptive mother Vera Dmitrienko said: “(The Russian soldiers) looted all the stores, of course they got a lot of alcohol and got drunk and started shooting. They shot into Nastya’s house, she was there with her uncle and she died immediately.”

Meanwhile, Ukraine’s president told how a child had died from dehydration after spending several days without water, power and heating due to Russian airstrikes in the south-eastern city of Mariupol.

Mr Zelensky said the six-year-old, called Tanya, was trapped under a destroyed house before rescuers found her body. She had reportedly lost her mother in the shelling and spent the last minutes of her life alone.

Mr Zelensky said in a video posted on Telegram: “People in Mariupol have no time to waste. The occupiers want us to die. We don’t want our people to die. There was an agreement on humanitarian corridors. Did that work? They ensure that a small corridor to the occupied territory is open for a few dozen people. Not so much towards Russia as towards the propagandists, directly towards the television cameras.”

Also referring to Tanya, the mayor of Mariupol, Vadym Boychenko, said: “In the last minutes of her life she was alone, exhausted, frightened and terribly thirsty.” With conditions nearing a wind chill of -20C and heavy snowfall hampering efforts to get innocent civilians to safety, the latest night of bloody carnage saw missiles falling on communities with no military connections whatsoever.

Ms Zelenska listed more children who had lost their lives to the conflict. On Instagram she wrote: “18-month-old Kirill from Mariupol was wounded by the shelling, and doctors could do nothing. Polina from Kyiv. She died during the shelling on the streets of our capital, along with her parents and brother. Her sister is in critical condition.

“Arseniy, 14 years old. A fragment of the projectile hit his head.The medics could not reach the boy under the gunfire. Arseniy bled to death. Sofia, six years old. She, along with her one-and-a-half-month-old brother, mother, grandmother and grandfather were shot to death in their car. I have to tell you about it. At least 38 children have already died in Ukraine. And this figure might be increasing this very moment due to the shelling of our peaceful cities.”