Kent has been revealed as the most dangerous county for drivers in the UK according to new research.

The county in the south east of England has seen the highest number of fatalities and seriously injured casualties on its roads in the last five years.

It was closely followed by neighbouring Essex which saw 3,770 in the five-year period while Hampshire came in third with 3,561.

The research, by comparison and switching service Uswitch, has analysed data from the Department of Transport and identified the local authority areas with the highest number of deaths and seriously injured casualties.

There were 131,369 reported casualties on UK roads over the past 5 years where casualties is defined as someone who died or was seriously injured. 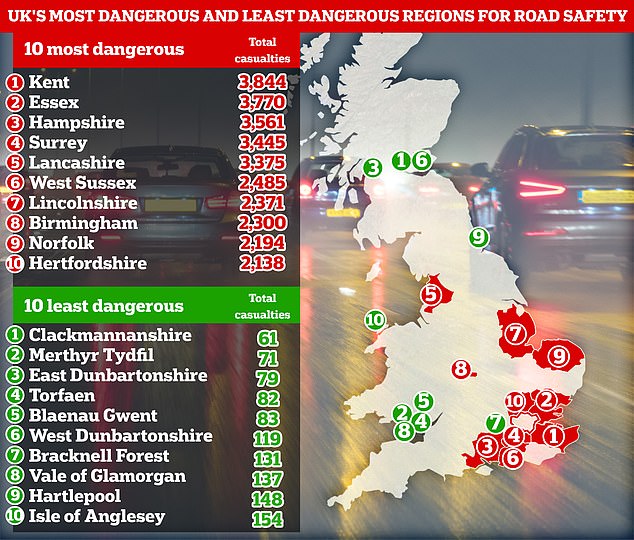 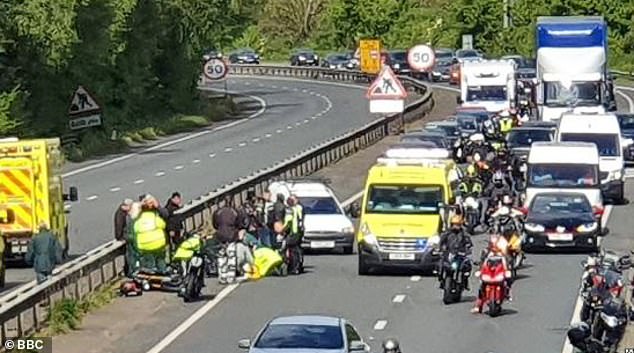 New data analysis has revealed Kent is the most dangerous county for road safety. Pictured: A man was rushed to hospital with serious injuries after this crash on the A21 in Kent in May 2019 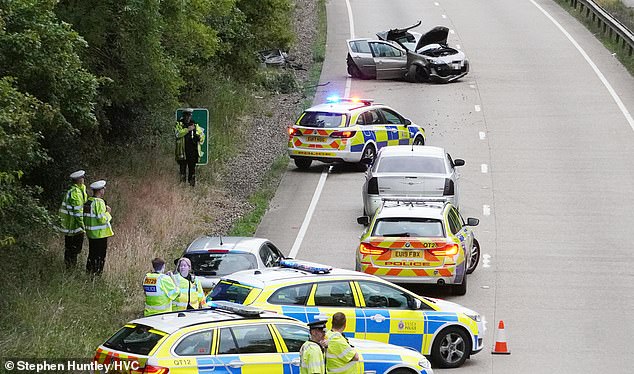 Police on scene of a crash on the A12 in Chelmsford, Essex, in June this year. Essex has been revealed as the county with the second highest number of road deaths and serious injuries

Splitting this out by road users, car drivers and passengers were the largest group, with 48,963 casualties, followed by pedestrians with 29,517.

Meanwhile, there were 28,671 reported casualties involving motorcyclists and 18,237 involving cyclists.

The majority of road accidents involve people aged between 24 and 55 years old, with 60,119 casualties reported over the past 5 years – 46% of all recorded casualties.

There was also quite a considerable gender split in the data, with 69% of all reported accidents involving men, compared to just 31% involving women.

Over 50% of casualties on the road occurred at speeds of just 21 – 30 mph, while T-junctions being the most dangerous type of junction, with 37,133 reported casualties over the past 5 years.

The South East of England is home to the most dangerous roads in the UK, with three out of the five local authority areas reporting the highest number of casualties.

Lancashire is the most dangerous region in the north of England with 3,375 casualties in the time period – ranking fifth overall.

In the Midlands, Lincolnshire and Birmingham ranked seventh and eighth with 2,317 and 2,300 respectively.

Meanwhile, results for Scotland and Wales revealed that both countries had some of the safest roads in the UK.

Eight out of the ten local authorities recorded the fewest number of reported casualties.

Bracknell Forest and Hartlepool were the only two English regions to appear in the top ten.

Kent County Council, the authority responsible for maintaining roads in the region, has said they are doing all they can to reduce the number of deaths and serious injuries on their roads but said drivers must also take responsibility.

A Kent County Council spokesman said: ‘We work hard to ensure our roads are as safe as possible and making comparisons between, for instance the City of London with a square mile of road to Kent, with 1,400 square miles of road, is not a fair comparison.

‘That said, we absolutely appreciate too many people are involved in crashes on Kent’s roads and one crash is too many.

‘We study collision data and make changes to roads where it is found engineering can make a difference to the safety of road users.

‘We also work with our colleagues in the emergency services to reduce illegal driving behaviour such as speeding, drink driving, mobile phone use, and not wearing seatbelts.

‘There is only so much, however, Kent County Council can do.

‘The safety of our roads is the responsibility of all road users – research shows that the vast majority of crashes are caused by poor driving or other human factors.

‘We therefore have a wide-reaching education and promotional plan to help everyone – from young pedestrians to older drivers – make better decisions on our roads.

‘We can all help reduce the number of crashes by being more patient, being more alert to other road users and sharing our roads safely.

‘It is vital that we all recognise the way we drive, ride or walk plays a big part in avoiding becoming a casualty on our roads.’ 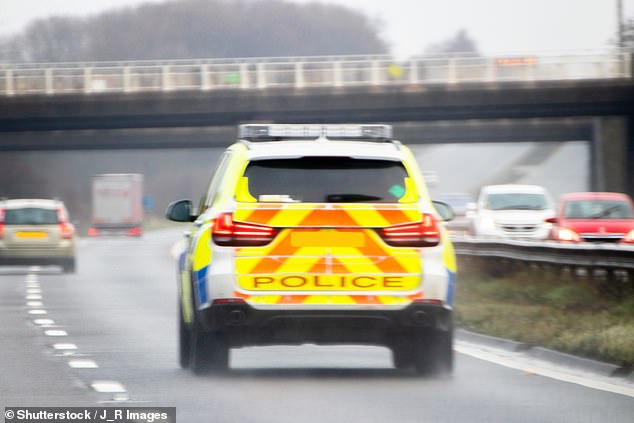 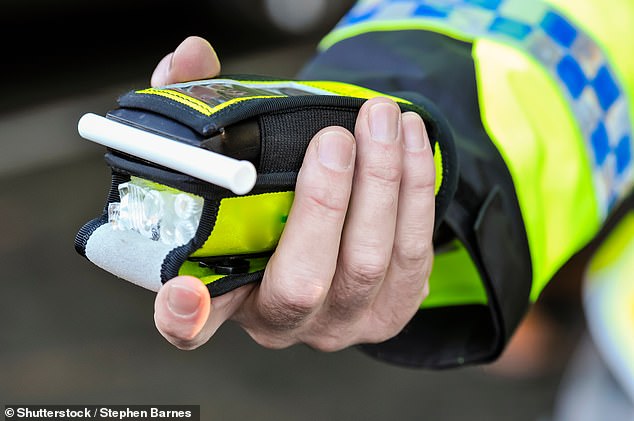 Last year, the number of people killed on UK’s roads in drink-drive crashes reached an eight year high as the latest Department for Transport figures showed there were between 230 and 270 fatalities in accidents where at least one driver or rider was over the alcohol limit in 2017

The Safer Essex Roads Partnership, which includes Essex County Council, said that the county’s traffic levels must be taken into account when analysing crash data.

The authority said Essex is on track to see a 40% reduction in deaths and serious injuries from 2010 to 2020.

Nicola Foster, Chairman of The Safer Essex Roads Partnership (SERP), said: ‘The figure of 3,770 is for recorded killed or serious injured collisions (KSI).

‘The DfT also publish an adjusted figure for use when making comparisons between different areas.

‘This adjustment is made to take account of the fact that in 2016 around half of the Police forces in Great Britain adopted a new recording system that reduces the number of cases where some serious casualties are erroneously recorded as slights.

‘Therefore, Police forces that have adopted the new system will tend to record more KSI.

‘The adjusted figure for Essex is the 4th largest in the country, behind Kent, Hampshire and Lancashire.

‘However, during the 2015-2019 period traffic levels in Essex were the second highest in the country, second only to Hampshire.

‘When comparing different areas, it’s important to take the size of the areas into account.

‘An area with more traffic will have more collisions because there are more opportunities for people to have them.

‘Adjusting for traffic levels by using the measure KSI per million vehicle miles, puts Essex at 138 out of 211 local authority areas.

‘This has led us to question what number of deaths is acceptable to the people of Essex.

The only number we feel is acceptable is ZERO. This is why we have launched #VisionZero.’

The SERP launched their Vision Zero campaign earlier this month with the aim of reaching zero road deaths by 2040. 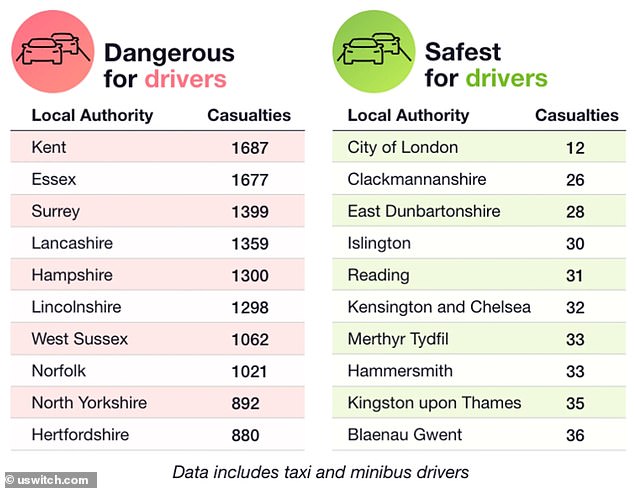 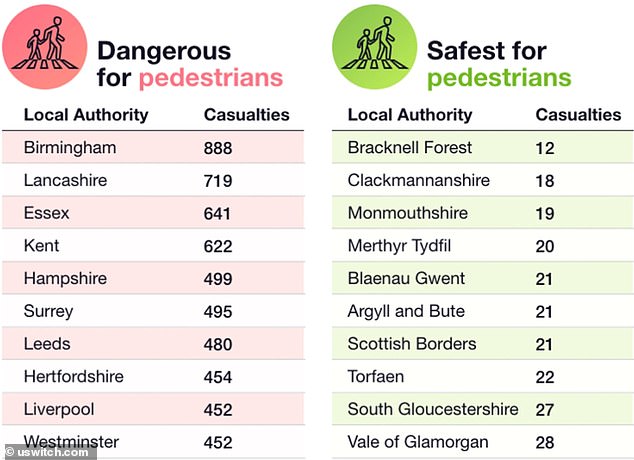 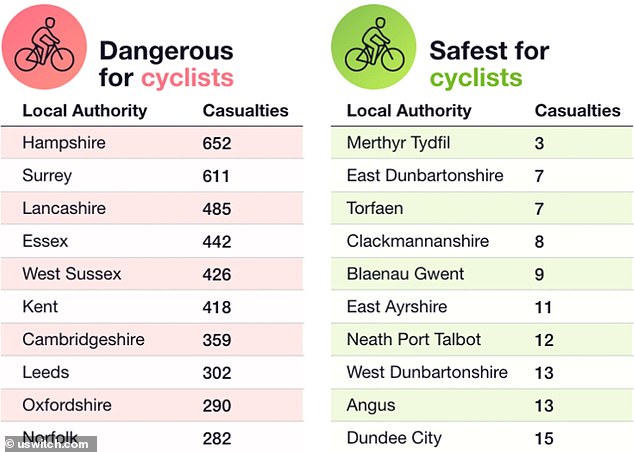 This is lower than the South East region, which is made up of 19 local councils and saw a total of 22,343 fatalities and serious injuries in the same period.

The most dangerous area of London was identified as Westminster where there were 1,099 fatalities or serious injuries while Lambeth ranked second with 829.

The safest region in England as a whole is the North East which is made up of just nine local councils and saw only 4,495 casualties in the five-year span.

Experts have said as the weather worsens and despite their being fewer cars on the road, it’s vital drivers remain alert.

Florence Codjoe, car insurance expert at Uswitch.com, said: ‘With tens of thousands of people killed or seriously injured each year in traffic accidents, road safety is something drivers should always keep in mind, wherever they are.

‘And as weather conditions get worse moving into winter, drivers need to be even more conscious of their surroundings.

‘Rain and snow on the road can reduce your grip and increase stopping distances, while the darker days can impact your visibility while driving.

‘It’s vital drivers remain aware, even with fewer cars on the road than usual.’

It comes as the Road Safety Foundation has published a landmark report into the safety of Britain’s roads and has called for action to help prevent fatalities on the country’s road network.

The report, Looking Back – Moving Forward, says that the value to society of preventing these 8,000 deaths and serious injuries over 20 years is forecast to be more than £4 billion.

This includes the cost to the NHS, long-term care, fire, police, ambulance services, and the courts.

Now in its 20th year, this annual report examines the performance of Britain’s motorway and ‘A’ road network, identifying the roads where lives could be saved with physical improvements.

This year’s findings show that 60% of all deaths are concentrated on 13% of Britain’s roads.

The report also identified ‘persistently higher risk routes’ and found that 1,400 fatal and serious crashes occurred on 38 of these roads between 2013 and 2018.

Researchers estimate the value of preventing these crashes would have been almost £700 million. 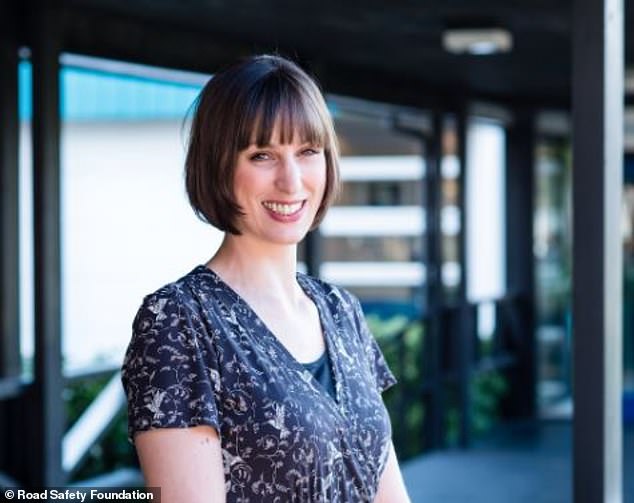 Suzy Charman, executive director of the Road Safety Foundation, has called on the Government to invest £1.2 billion to improve 5,000km of Britain’s most dangerous roads

Suzy Charman Executive Director of the Road Safety Foundation said: ‘This 20th annual report shows that less than 1% of roads were significantly improved between 2013-2015 and 2016-2018.

‘This report identifies an investment package of £1.2 billion that would see over 5,000km of roads treated.

‘This would prevent an estimated 8,000 fatal and serious injuries over 20 years, with great returns – every £1 invested should benefit society by an average of around £3.60.

‘At a time when we need to boost our economic recovery and protect the NHS what better way of saving our society an estimated £4.4 billion over the next 20 years.

‘Let’s move forward and save lives by improving these roads.’

Some of the persistently higher risk routes identified by the report include the A252 and the A274 in Kent which have seen 20 and 46 fatalities or serious injuries between 2013 and 2018 respectively.

In the north, the A645 in Wakefield was identified as one of the country’s most persistently dangerous along with the A6135 in Barnsley and the A682 in Lancashire.

The report suggests that physical improvements to these roads, such as improved signage or road markings, could make them safer and therefore save society money in the long term.

Researchers noted that despite the recession from 2008 to 2010 leading to a substantial road death reduction in the UK, it has flatlined since.

Commenting on the stagnation, Joshua Harris, director of campaigns for road safety charity Brake, said: ‘On average, five people are killed on our roads every day, every one a tragedy, and every one could have been prevented if the Government had the courage to make the big decisions to bring about change on our roads.

‘We need 20mph default speed limits on towns and cities, zero tolerance limits for drink-driving and, most of all, a coherent and holistic approach to managing safety on our roads, with targets to eliminate death and serious injury for good.

‘No one would accept the level of death and serious injury we see on the roads in any other form of transport – in rail, aviation and maritime, dedicated agencies investigate crashes and come up with solutions to stop them happening again, why do we not have this for roads?

‘Unless we take the safety of road users seriously, and treat road crime, such as speeding, like real crime, we will continue to see lives being ruined across the country, every day, by preventable road crashes.’