Dozens of protesters have been killed in Kazakhstan, as fresh violence broke out in its biggest city and Russian peacekeeping troops headed to the former Soviet republic.

A police spokeswoman told state news channel Khabar-24 that “dozens of attackers were liquidated” overnight into Thursday in Almaty.

Two members of the security forces were decapitated and are among at least 18 who have died, authorities said. More than 350 police have also been injured, Khabar-24 reported.

The interior ministry said more than 2,000 people have so far been arrested.

The protests began in the oil-producing western province of Mangistau on Sunday after a cap on liquified petroleum gas – which many people use to power their cars – was removed, causing prices to double.

The country’s president reversed the hike but the unrest which has lasted for days has morphed into a broader set of grievances. The mayor’s office and presidential palace were set alight in Almaty on Wednesday, and the airport temporarily seized, with ongoing battles between masses of protesters and police.

Police were also out in force in the capital Nur-Sultan, which was reported to be quiet.

President Kassym-Jomart Tokayev has blamed foreign-trained “terrorist” gangs, and a Russia-led military alliance is sending troops in a “peacekeeping” mission.

A two-week state of emergency has been declared nationwide, curfews installed, and the entire government has resigned in Kazakhstan’s most dramatic upheaval since the fall of the Soviet Union.

There were new battles reported on Thursday evening in Almaty’s main square, occupied during the day by hundreds of troops and protesters. 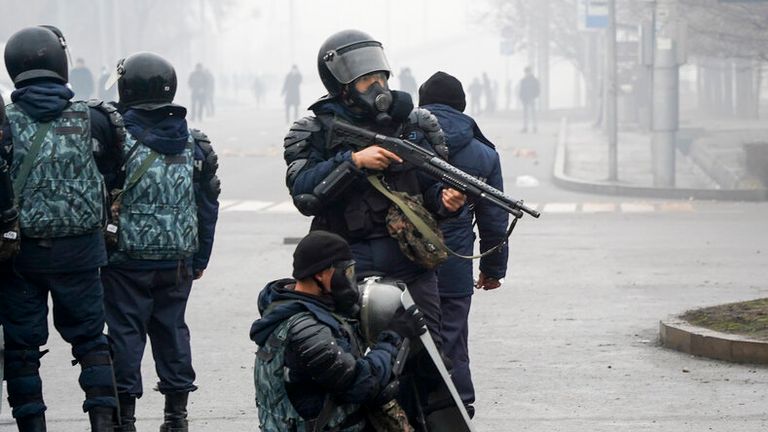 Reuters reporters said they heard explosions and gunfire as military vehicles and soldiers advanced, but that the shooting stopped after nightfall.

Internet outages are making it difficult to gauge the extent of the unrest across the sprawling country with a population of 19 million.

Much of the protesters’ anger is directed at former long-time leader Nursultan Nazarbayev, who quit in 2019 but remains powerful and whose family is believed to control much of the economy.

The chant of “Old man, go away!” has been heard in videos, such as one from Aqtobe, in the country’s west, where police fired water cannon and stun grenades.

Speaking early on Thursday, President Tokayev said: “Almaty was attacked, destroyed, vandalised, the residents of Almaty became victims of attacks by terrorists, bandits, therefore it is our duty… to take all possible actions to protect our state.” 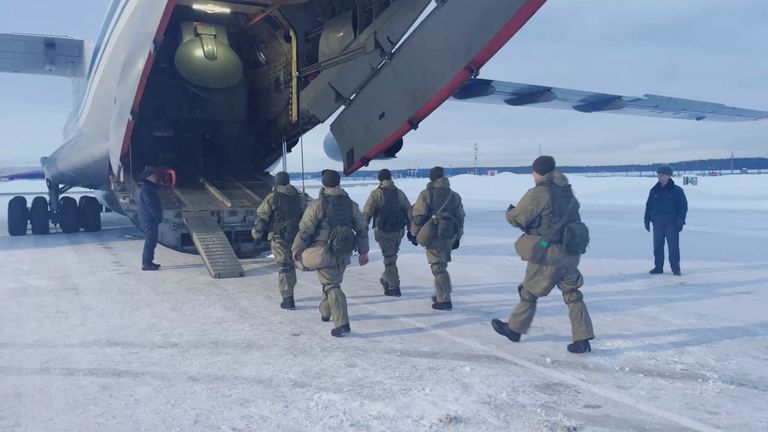 Troops from the Collective Security Treaty Organisation – an alliance of Russia, Belarus, Armenia, Kazakhstan, Kyrgyzstan and Tajikistan – have been deployed.

Around 2,500 peacekeepers are being sent – but that could increase, the alliance’s general secretary told Russia’s RIA news agency.

It is expected to be a mission of “a few days or weeks”, RIA quoted him as saying.

It’s unclear if they are on the ground yet, but on Thursday Russia posted pictures of troops and vehicles boarding planes in Moscow. 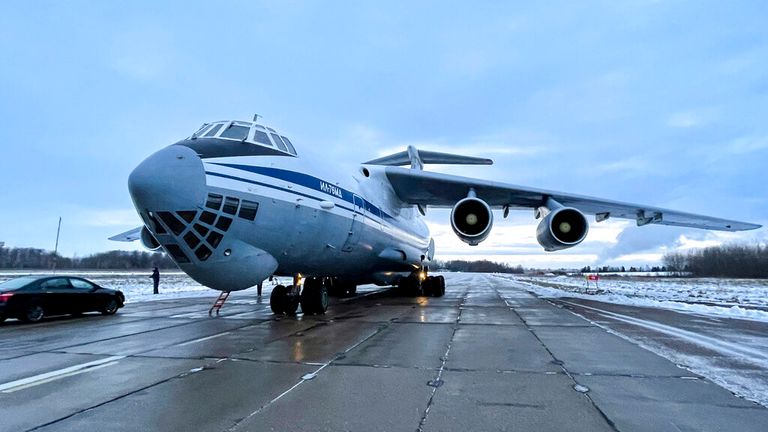 Belarus also released pictures of a plane with troops waiting to leave from its capital, Minsk.

NATO foreign ministers are to meet over the crisis on Friday, while the EU has said the “rights and security of civilians must be guaranteed”.

US Secretary of State Antony Blinken “advocated for a peaceful, rights-respecting resolution to the crisis” in a discussion with his counterpart, a spokesperson said.