Activists say cases of rape and sexual violence on women are common as they decry ‘reluctant and delayed response’. 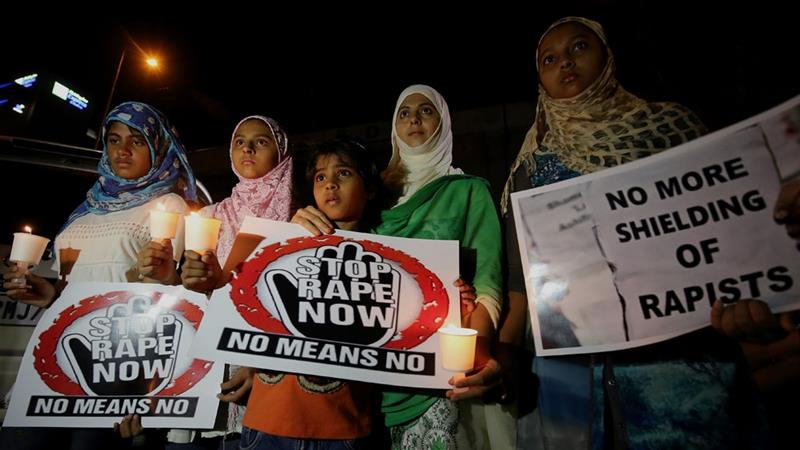 Local medics told Al Jazeera on Thursday that at least 30 students were injured over the past two days during clashes with security forces in various parts of the restive region.

The demonstrators are demanding justice for the girl, whose killing sent shockwaves across the Muslim-majority region.

The minor was grazing cattle in Rasana village in Jammu’s Kathua district when she was abducted in January.

She was kept heavily sedated in a Hindu temple, where she was gang-raped by at least three men over the course of four days, according to a police investigation. She was later strangled and her body was found in a forest near the temple.

Eight men, all Hindu, have been accused of being involved in the raping and killing of the girl. According to the police report, the suspects’ actions were aimed at driving away the Muslim nomads from the area.

The case has become another cause of outrage in a region witnessing anti-India protests intermittently.

Meanwhile, a number of prominent members of India’s ruling Hindu nationalist Bharatiya Janata Party (BJP) have rallied in support of the accused in recent days.

Prime Minister Narendra Modi broke his silence just last week, three months after the girl’s murder, saying that “justice will be done and no criminal will be spared”.

Sana Beigh, a student protesting in Srinagar on Thursday, said that there had been a “reluctant and delayed response of solidarity from India”.

“This is completely shameful. How can someone support it or even maintain silence about it?

“No Muslim is safe in India, see the intention behind the crime,” she argued.

During its time in power, the BJP has faced accusations of increased hostilities towards India’s minority communities.

Meanwhile, in two decades of ongoing conflict in Kashmir in which at least 70,000 people have been killed, the Indian army has also been accused of sexual violence.

“The rapes that take place in Kashmir are not just the cases of sexual violence, the state structures are involved in these cases. They are not directly involved, but they did a lot to shield the accused,” said Essar Batool, a local female activist.

Mariya Salim, senior campaigner for women’s rights at Amnesty International India, told Al Jazeera that cases of rape and other forms of sexual violence against women and girls are distressingly common across India.

She said that the case of the eight-year-old girl captured national and international attention only after a number of lawyers and a Hindu group trued to obstruct the police investigation and prosecution of the alleged perpetrators.

“The fact that on Monday the Supreme Court had to order police protection for the victim’s family, a family friend and their lawyer because of the threats and harassment they have been facing for pursuing this case, shows how deep the bigotry around this case runs,” Salim said.

Deepika Rajawat, the lawyer representing the girl’s family, and local activist Talib Hussain have accused the supporters of the suspects of issuing threats against them.

Right-wing Hindu groups in Jammu have accused the local crime branch of bias in the investigation, saying some of the police officers tasked to probe the case are Muslims.

“It has again been proved that a woman, her very gender, is the easiest tool,” she said.

Kashmir is claimed by both India and Pakistan, with both countries administering parts of it, making it one of the world’s heavily militarised zones.

The Coalition of Civil Society, a local human rights group, said in a statement said that the rape and murder of the girl “need to be understood in the paradigm of widespread militarization in Jammu and Kashmir.

“The systematic use of sexual violence as a weapon of war by the armed forces is a common feature of this militarised violence,” it said.