Nine in ten Britons have to wait at least 24 hours for their Covid swab results and HALF don’t hear back within two days, official data shows as SAGE warns Test and Trace is only having a ‘marginal’ impact on tackling the virus

Nine out of 10 people taking coronavirus tests in England have to wait more than 24 hours for their result, despite Boris Johnson’s pledge to turn all swabs around within a day by the start of July.

NHS Test & Trace data shows that in the last week of September more than 750,000 people had to wait more than 24 hours to find out if they had Covid-19. Just 116,026 out of nearly a million tests were turned around within the Government’s target time — the equivalent of 11.9 per cent. Fewer than half of Britons who have had a test hear back within two days.

Getting test results quickly is vital so people can start to self-isolate and warn loved ones they have been close to if their test is positive, or be reassured that they probably don’t have Covid-19 if it is negative.

The Prime Minister had promised to make sure all tests were completed within 24 hours by the end of June, but the system has never hit the target.

Scientific advisers on SAGE warned that contacts of positive cases should be isolated within 72 hours in order to stop the spread of the disease. However, in thousands of cases it is taking longer than this just to process test results.

It comes as it was today revealed that Number 10’s scientific advisory panel believes Test and Trace is only having a ‘marginal’ impact on tackling Covid-19. The £12billion programme will ‘further decline’ unless it grows at the same rate as the epidemic, SAGE warned in documents released late last night.

The slowest tests are the ‘satellite’ swabs being done in care homes, of which only two per cent produced a result within 24 hours in the seven days up to September 30. Home test kits, which are sent by post for people to do themselves, were not much faster, with only 2.4 per cent of results received within a day.

On average, just 11.9 per cent of coronavirus test results are returned within 24 hours, meaning the Government is missing the Prime Minister’s target by a huge margin. A further 36.5 per cent of tests are returned in the 24-48 hour bracket, meaning just under half take two days or less to get back to the person who took the test. 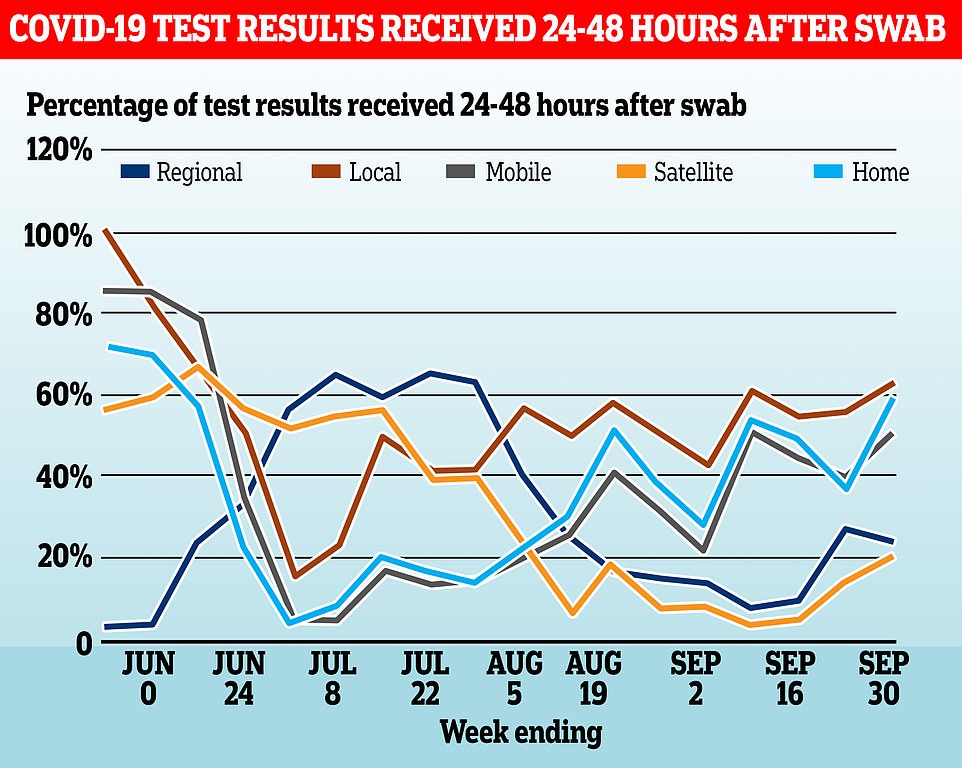 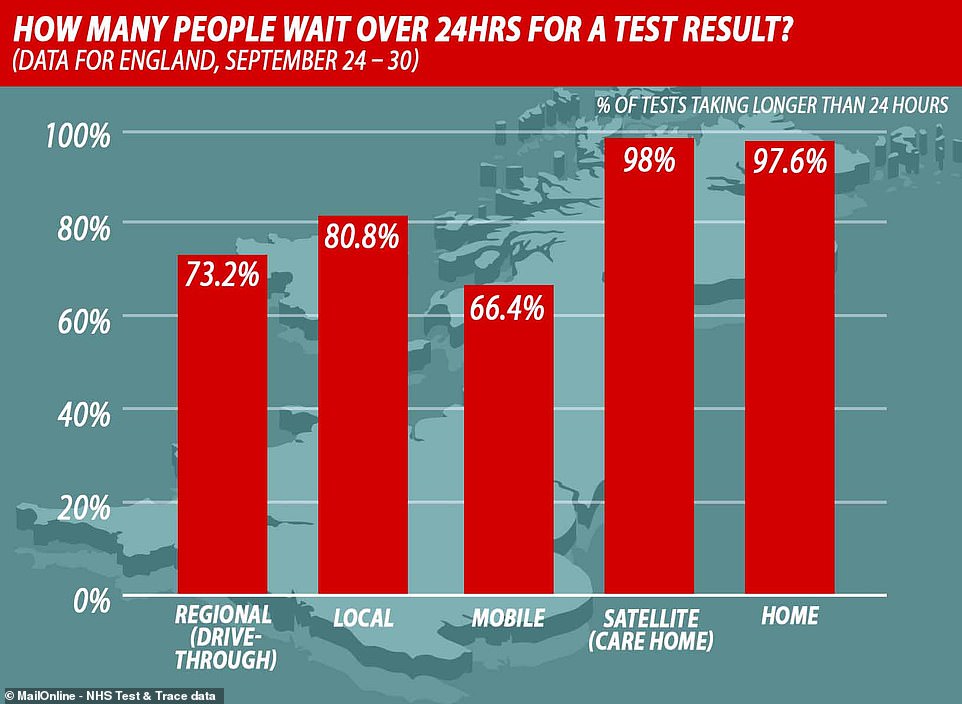 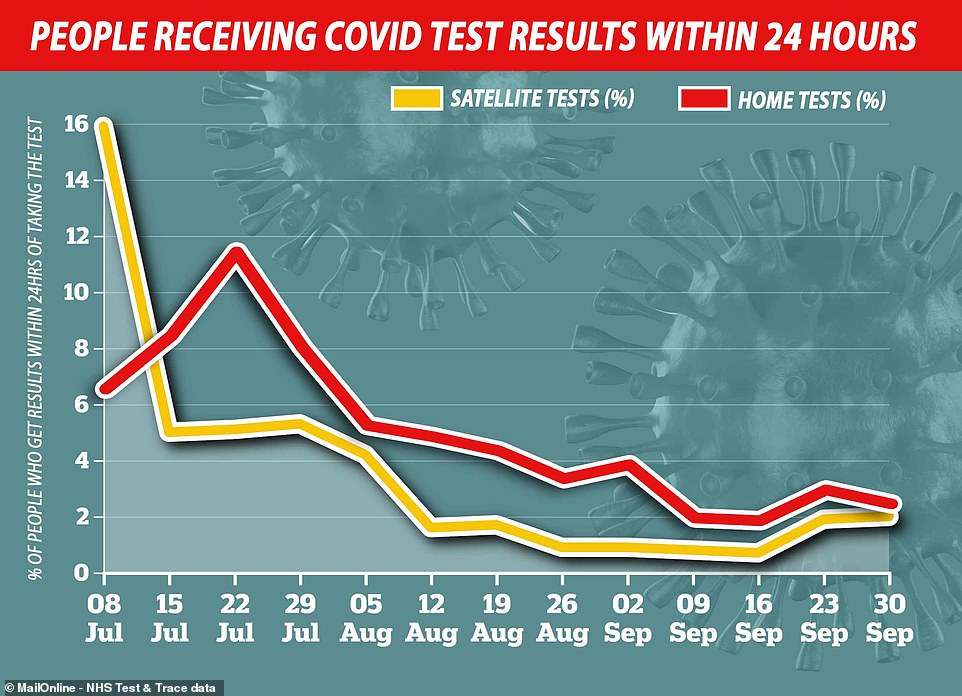 Waiting times for test results done in care homes or through home testing kits sent in the post have got worse and worse since the summer, with now only around two in every 100 people getting their result within 24 hours

Prime Minister Boris Johnson promised in the spring that all coronavirus tests would be processed and the results returned within 24 hours.

He set the target for the end of June but, since then, it has slipped further and further out of his grip as Test and Trace’s timeliness has slumped.

On June 3, when grilled by his own MP and former health secretary, Jeremy Hunt, Mr Johnson said: ‘The tests conducted at the 199 testing centres, as well as the mobile test centres, are all done within 24 hours, and I can undertake to him [Hunt] now to get all tests turned around in 24 hours by the end of June, except for difficulties with postal tests or insuperable problems like that.’

The testing service took a swing and a miss at this target, managing to return only 55 per cent of test results within 24 hours by the end of June.

This has slumped further now, with just 11.9 per cent of results coming back in that time.

In the week from September 24 to September 30 there were a total of 973,426 swab tests done on members of the public and care home residents.

Just 116,026 had their results confirmed and sent back to the person who took the test within 24 hours.

NHS TEST & TRACE ‘HAVING ONLY A MARGINAL IMPACT ON UK OUTBREAK’

SAGE experts say Test and Trace is having only a ‘marginal’ impact on tackling the coronavirus in England because the system neither tests nor traces enough people.

The £12billion programme will ‘further decline’ unless it grows at the same rate as the epidemic, the scientific advisory group warned in documents released on Monday.

Boris Johnson has promised the scheme would be ‘world beating’, while experts and politicians alike see it as a major way of reducing the severity of restrictions imposed during the crisis.

‘The relatively low levels of engagement with the system… coupled with testing delays and likely poor rates of adherence with self-isolation suggests that this system is having a marginal impact on transmission at the moment,’ they wrote.

‘Unless the system grows at the same rate as the epidemic, and support is given to people to enable them to adhere to self-isolation, it is likely that the impact of Test, Trace and Isolate will further decline in the future.’

The criticism, voiced in a summary of a review of measures on September 21, will increase the pressure on Baroness Harding, the Conservative peer in charge of Test and Trace.

Shadow health secretary Jonathan Ashworth said: ‘This is yet further evidence that the Government’s incompetence is hampering our response to a second wave.

‘Sage have essentially confirmed test and trace is not functioning adequately as we have been warning for months.

‘Ministers need to get a grip of testing so we can get control of the virus.’

A further 750,730 tests were completed but took longer than 24 hours — of which almost half were sent back within 48 hours, while 106,670 were incomplete when the data was collected.

Some of the 106,670 tests may have had their results returned within 24 hours if they were taken only a few hours before the official data was recorded, meaning the true figure could be slightly skewed upwards in next week’s official release.

Drive-through regional testing centres managed to return 27 per cent of results within 24 hours, compared with 19 per cent in local test centres and 34 per cent in mobile test units.

Satellite tests make up the single largest group of tests because care homes are offered up to 100,000 swabs per day for staff and residents.

The most common route for members of the public was local test centres, which are set up in badly-affected areas. Out of the 177,000 done in the last week of September, 33,904 were completed within 24 hours.

Larger proportions of tests are completed in between 24 and 48 hours after the person takes the swab, data shows.

Around one in five satellite care home tests take this long (20.2 per cent) along with a quarter of home test kits (24.1 per cent).

This means that, overall, around 45 per cent of tests take longer than 48 hours.

The smallest proportion of people waiting this long are those using regional test centres, who got 85.4 per cent of results in under 48 hours in the most recent week.

Getting test results quickly is vital because, if someone tests positive, it is the first stage in a complex process of isolating people who may be transmitting the disease.

Every positive case must be contacted and told to isolate themselves, then reached by a contact tracer who works out which people around them might be at risk.

Those at-risk contacts must then also be contacted and persuaded to isolate at home in a bid to stop the virus transmitting into a wider network.

This process can take days and every hour lost waiting for a test result is an opportunity for the person who took the test, and their contacts, to spread Covid-19 to more people.

In a SAGE paper published in June the top scientists warned: ‘Isolation of contacts of individuals who have Covid-19 within 48 hours was desirable’.

HOW MANY TEST RESULTS COME BACK WITHIN 24 HOURS?

…and how many test results come back in between 24 and 48 hours?

They added: ‘Modelling suggests that any delay beyond 48-72 hours total before isolation of contacts results in a significant impact on R.

‘The sooner it is done the better.’

In SAGE documents released this week some of the country’s best scientists, who help Government decision-makers to understand scientific evidence, poured scorn on the NHS Test & Trace system.

They said it was only having a ‘marginal impact’ on the coronavirus outbreak in the UK.

In a series of papers which Boris Johnson has been accused of ignoring after they found a ‘circuit breaker’ two-week lockdown would be the most effective way to slow the current spiralling outbreak, SAGE said Test and Trace is not keeping pace with cases in England.

The summary of the group’s comments said: ‘The relatively low levels of engagement with the system… coupled with testing delays and likely poor rates of adherence with self-isolation suggests that this system is having a marginal impact on transmission at the moment.

”Unless the system grows at the same rate as the epidemic, and support is given to people to enable them to adhere to self-isolation, it is likely that the impact of Test, Trace and Isolate will further decline in the future.’

The system, run by Baroness Dido Harding, came under fire last month when thousands of people were unable to book tests anywhere near their homes.

Backlogs in labs that became overwhelmed as the outbreak surged meant that waiting times for results got longer and tests had to be rationed to the worst-affected areas to buy time for technicians to catch up with processing samples.

In a rebuke to SAGE’s comments, Mr Johnson’s official spokesman said today: ‘If you look at the work which Test and Trace has done, it has now reached over 500,000 people who may otherwise have been at risk of unknowingly passing on the virus.

‘It’s also doing very important work supporting local authorities, ensuring people can get a test where they need one and passing on contact-tracing data.’