Junior doctor who gatecrashed party, attacked two guests then punched and kicked a female police officer blames drunken rampage on working 80 hour week as he faces being struck off

A junior doctor who gatecrashed a party and went on a drunken rampage of violence including biting a female police officer could lose his job after being hauled before health chiefs.

Dr Gareth Byrne, 25, arrived uninvited at the house – which he previously lived in – after drinking two bottles of red wine and attacked two strangers, headbutting one three times and biting the other.

A medical tribunal heard he launched his attack after the revellers tried to eject him from the party in Newcastle-under-Lyme, Staffordshire, and shouted  ‘I’m a doctor – don’t you know who I am?’.

When police arrived he called a female officer a ‘f***ing sl*t’, punched her in the face and then tried to bite her arm. 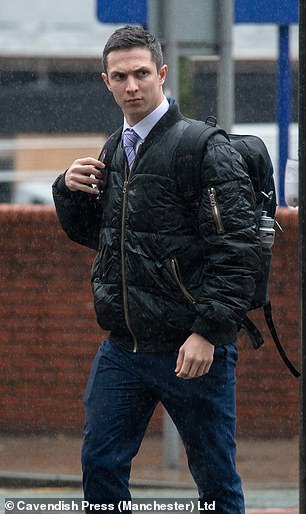 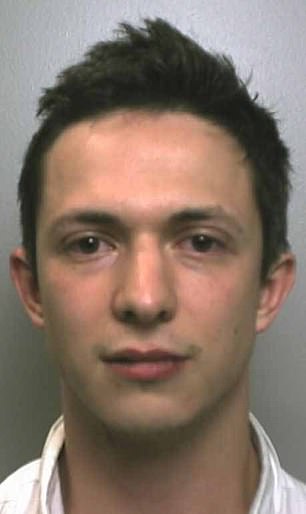 Dr Gareth Byrne, 25, could be struck off at a medical tribunal after assaulting two revellers at a house party he gatecrashed and then attacking a female police officer called to the scene. He is pictured left outside the hearing in Manchester and right in a mug shot following his arrest

He also kicked her in the back and damaged her engagement ring, with repairs costing £525.

Byrne, a Foundation Year One doctor, later said he was ‘paralytic’ and ‘ten out ten drunk’ but blamed the incident on working an 80 hour week at Royal Stoke Hospital.

He claimed he was one of a ‘large number of junior doctors who are suffering on a daily basis’ and claimed he had endured a ‘particular stressful week.’

This week he faced a disciplinary hearing at the Medical Practitioners Tribunal Service where he could be struck off for misconduct.

The incident occurred last May after Byrne and a colleague went to the Cherry Tree pub just half a mile from the hospital.

After leaving the pub he stumbled across his old house that he had lived in 18 months before.

Georgina Goring, representing the General Medical Council, told the hearing in Manchester: ‘A man known as Victim A reported that during the early hours of 26th May he was celebrating a friend’s birthday at a friend’s house.

‘Mr Byrne entered the property unknown to the people there, and he was under the influence of alcohol. Victim A tried to eject him from the property and Mr Byrne grabbed him and they both fell to the ground. 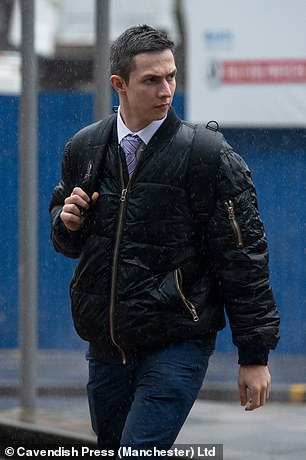 Byrne, pictured at the hearing, had been drinking red wine before entering his former home in Staffordshire uninvited and headbutting and biting two revellers who tried to get him to leave

‘Mr Byrne grabbed Victim A’s shirt which caused it to rip and began head butting him three times, which caused bruises and a small purple mark.

‘Mr Byrne told him he was a doctor and said: “Don’t you know who I am”. Victim A received no medical treatment for his injuries but reported that he was still hurting seven hours later.

‘Another report comes from a man called Victim T who was also in the property at the time. He said that during 1-2am on that day he was at a house party.

‘Mr Byrne entered the property and Victim A tried to eject him, to which a scuffle started between them. Victim T tried to intervene by by grabbing the doctor’s wrists but the the doctor bit his right wrist forearm area and kicked him.

‘The bite did not break any layers of the skin.

‘Two police officers attended – one entered the property to find out more information and was told how the doctor had let himself into the property, and two males had pinned him to the floor in the hallway.

‘He was placed in handcuffs and taken to the police van. He was clearly under the influence of alcohol. The police officer called PC F sat in the rear of the vehicle as they were going to the station.

‘But as they approached, Mr Byrne lunged towards her and hit her to her left cheek causing immediate pain. He began calling her a ‘f***ing sl*t’.

‘They had to restrain him outside of the van for a considerable amount of time.

‘During this he tried to bite PC F to her arm by grabbing it and forcibly bringing it to his mouth. He also kicked her back twice.

‘PC F noticed her engagement ring he been dented from the incident. During the booking in process in the station he tried to kick officers.

‘He was placed in a police cell and interview the same morning. He stated he was a doctor at Royal Stoke hospital. He had been to a pub and had had a particularly stressful week at work and felt he was not being supported. 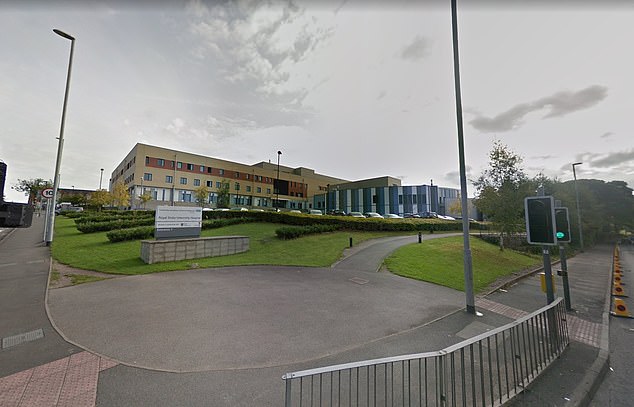 Byrne is a in his first year as a foundation doctor at Royal Stoke Hospital, pictured

‘When asked to rate out of 10 how drunk he was, he said he was ’10 out of 10 drunk, paralytic’. He then recalls waking up in a police cell and doesn’t remember anything after the pub.

‘He used to live at that address 18 months prior and was very apologetic. He appeared at Newcastle magistrates court and entered four guilty pleas.

‘He had to pay £600 to PC F in compensation for the damage to her engagement ring. He was a first year foundation doctor. After the incident he was excluded from the hospital for them to conduct an external investigation.’

Byrne’s lawyers are expected to make submissions about his fitness to practise today.

At his court hearing last June his lawyer Andrew Bennett said: ‘His career is, if not over, hanging by a thread. He completely lost it.

‘A large number of junior doctors are suffering on a daily basis and he had gone with a colleague to The Cherry Tree after a long working week.

‘By the time he left he was on auto-pilot and walked into a house he had not lived in for some time. This was well and truly out of character.’