‘Ready for a nostalgic blast of summer 2020’: Jubilant workers CELEBRATE crippling rail strikes as they make plans to WFH all week while unions grind country to a halt

Jubilant commuters are already making plans to work from home next week in a repeat of scenes not seen since lockdown when crippling rail strikes bring the country to a halt.

Britain is set to be plunged into a week of chaos when militant unions stage walkouts on June 21, June 23 and June 25 across the whole of the country with only half the network open and a severely restricted service in operation.

It is predicted the industrial action could cost the UK economy an estimated £450million, according to the Telegraph, and there are concerns it could slow the Government’s drive to get workers back to the office.

But many workers took to social media today to express their delight at being able to spend the week at home and were already looking forward to dusting off the home office equipment.

One social media user wrote: ‘Trains back on strike then. Thanks @northernassist this is going to be a fun summer of commuting…WFH again it is.’

Another added: ‘Am I the only who doesn’t mind the rail strikes meaning I can’t go to London next week? Happily work from home today topping up bird baths.’

A third welcomed the strikes, tweeting: ‘All for rail strikes providing it is Monday to Friday, providing the necessary incentive to WFH and give us a nostalgic blast of that blissful summer of 2020. 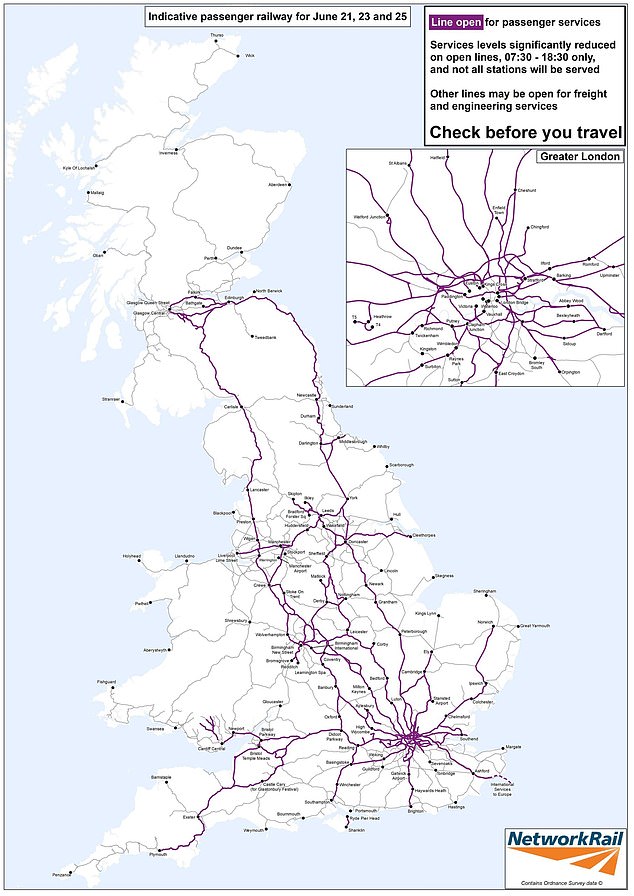 Commuters across the UK are celebrating ahead of the biggest rail strike in 30 years as it means they will be able to work from home. Pictured: the planned services during the strike

Members of RMT union at Network Rail and 13 train operators will strike next Tuesday, Thursday and Saturday

Rail bosses have revealed a map showing how only around half of Britain’s train network will be open on the days rail workers from Network Rail and 13 train operators are striking next week.

The limited service is set to cause major disruption to travel with some lines only open from around 7.30am until 6.30pm.

Network Rail chief executive Andrew Haines said the strikes have been timed to cause ‘maximum disruption’.

Ahead of the the industrial action next week, some rail operators have issued ‘do not travel’ warnings, including Southeastern and Northern, while Network Rail has advised passengers to expect disruption and to plan ahead. 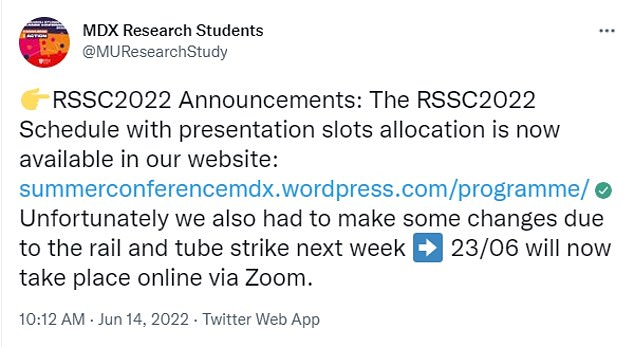 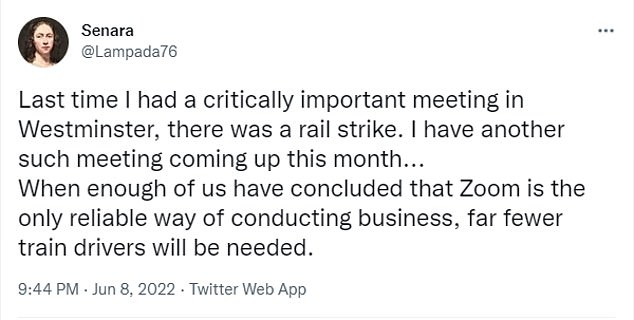 While some staff find it easier to work from home some or all of the time, many managers are concerned that long-term flexible working could reduce productivity, hamper teamwork and affect workers’ social lives.

Data published last month showed that, although the number of workers based in the office is yet to return to pre-pandemic levels, it is steadily increasing – a trend that could stall when the country is brought to a grinding halt next week.

Three in four adults in Britain are now travelling to work at some point during the week – up from two-thirds a month ago, an official survey suggested.

The figures pointed to a shift in certain types of public behaviour over the past two months – a period coinciding with a steady fall in Covid infections.

But the Government has struggled to shift the Working from Home culture entirely with a third of Britons continuing to spend at least part of their week working from home.

The Government fears that increased home working could affect the economy, as workers make fewer trips out to shop and buy lunch and shun office space.

Some social media users have suggested that the rail strikes will only enforce the view that working from home is more practical and reliable.

A number of events and conferences have been forced online by the rail strikes as organisers try to plan ahead and avoid any disruption that could be caused next week.

Meanwhile, not everyone is happy for the strikes to go ahead, as some have said they are still required to go into the office and will have to make their own way there.

One user wrote: ‘Last time I had a critically important meeting in Westminster, there was a rail strike.

‘I have another such meeting coming up this month…When enough of us have concluded that Zoom is the only reliable way of conducting business, far fewer train drivers will be needed.’

Another added: ‘Easy for the laptop class to WFH in a transport strike – major hassle for those who have to be present.’

As well as causing huge disruption for commuters, the strikes are also set to take place during several major events.

The strikes, which start on the Tuesday and run until Saturday, will cause travel chaos for people going to a number of major events, including concerts, test match cricket and the Glastonbury festival.

Glastonbury starts on June 22 and runs until June 26, with many festival-goers planning to travel to the site by train.

Other events that week include England playing New Zealand in a test match in Leeds, the British athletics championships in Manchester, and gigs in London’s Hyde Park by Elton John (June 24) and the Rolling Stones (June 25).

Several users have taken to social media to slam the strikes for causing major headaches for plans they have made months ago.