Japanese pupils will no longer need to dye their hair a regulatory shade of black as a number of high schools abolish rules governing the appearance of students.

Tokyo Metropolitan Board of Education will scrap five rules at nearly 200 public high schools and educational institutions next month, the start of the academic year, according to media reports. 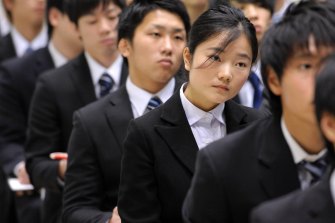 One rule being revoked is a ban on a particular undercut hairstyle known as a “two block”, which consists of a short cut at the side and back with long hair at the front, the Mainichi newspaper reported.

Around 60 per cent of public schools in Japan require pupils who do not have straight, black hair to submit a document proving their hair is a lighter shade or naturally curly.

As a result, one in 13 pupils has been “urged” by their school to dye their hair a uniform shade of jet black in order to fit in with their classmates. The regulation will remain in place at 20 Tokyo schools after a consultation with parents and students showed they wanted the rules to stay in place.

Kaori Yamaguchi, a member of Tokyo Metropolitan Board of Education, told Mainichi: “Although a wonderful effort, it is regrettable it took so long.

“Japanese people have been educated to believe that it is a virtue to simply abide by the rules. I hope this will be an opportunity for people to discuss what we should do, to create a society where rules are observed in a manner convincing to everyone.”

Last year, a former schoolgirl won compensation at Osaka district court after teachers piled pressure on her to dye black her brown hair. She eventually dropped out owing to the emotional toll of having to dye her hair every four days.

The court ruled that the school’s actions were legal. However, it was ordered to pay the former pupil 330,000 yen in damages for emotional distress.