Premium Bond! Cinemagoers face paying £2.50 more than other films to see No Time To Die

As everyone’s favourite suave spy, he’s used to supervillains trying to hold the world to ransom.

But now it looks as though James Bond has been given a licence to make a killing, after it was revealed that fans will have to pay significantly more to see the new 007 movie at the cinema than other films.

Daniel Craig’s Bond swansong No Time To Die can set viewers back up to £2.50 more than a rival Marvel blockbuster. 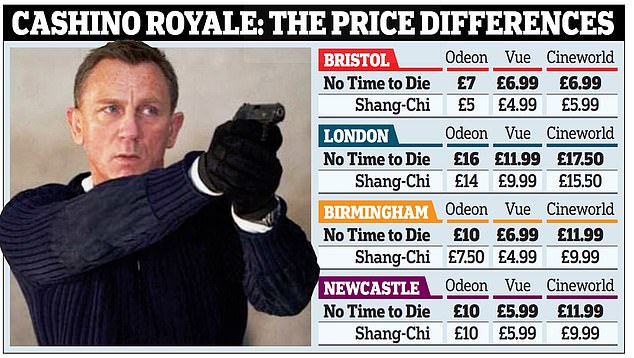 A peak ticket for the Cineworld screening in London’s Leicester Square tonight costs £17.50, compared to £15.50 for Shang-Chi and the Legend of the Ten Rings.

At the Odeon in Birmingham the difference is £2.50. The Vue in Leicester Square is also charging £2 more for tonight’s screening of Bond than for Shang-Chi.

Fans have been left shaken by the prices, with one tweeting: ‘While booking for No Time To Die I saw that cinema tickets were more expensive than usual for it. It should not be a surprise that cinemas have suffered from Covid, but this won’t help to bring the same turnaround as before.’

However, if Bond fans go in the morning or on Monday they can expect to pay £1-to-£3 less. A Vue spokesman said: ‘Prices can vary slightly between specific shows, with the difference no greater than £2 between No Time To Die and other films available on the same day.’

A spokesman for Odeon said: ‘Current ticket prices for No Time To Die are broadly in line with opening weekend blockbuster showings, and reflect our flexible pricing structure.’ 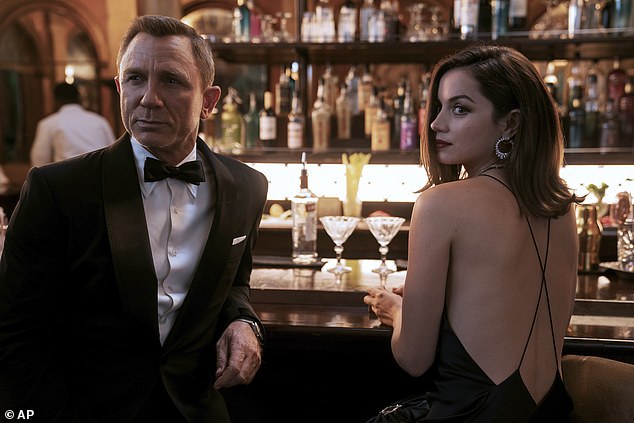 Fans will definitely get their money’s worth – at two hours and 43 minutes, it’s the longest Bond ever

The most expensive ticket appears to be at the BFI IMAX in Waterloo – Britain’s biggest screen – where fans can look to pay £27.50 in peak time and £14 on a weekday morning. But the prices have not put off cinemagoers, with thousands attending midnight screenings across the UK on Thursday.

No Time To Die took an estimated £4.5million-to-£5million in its first 24 hours at the box office. The opening is around 13 per cent higher than 2015’s Spectre but 26 per cent below 2012’s Skyfall, Universal Pictures said.

The long-awaited film has broken the record for the widest theatrical release of all time in Britain, with 772 cinemas showing it – 25 more than the previous record-holder Star Wars: The Rise Of Skywalker in 2019.

Director Cary Joji Fukunaga’s blockbuster currently has an 84 per cent rating on the Rotten Tomatoes reviews website – a marked increase on Spectre’s 63 per cent. But it has fallen short of Skyfall’s 92 per cent and the 94 per cent held by Craig’s 007 debut, Casino Royale.

And fans will definitely get their money’s worth – at two hours and 43 minutes, it’s the longest Bond ever.