They played a scorching round.

Conditions are so hot, a northern California golfer accidentally started a bushfire with a chip shot, fire officials said.

The unidentified hacker hit a shot into the rough on the fifth hole at Gold Hills Golf Course in Redding, about 160 kilometres south of the Oregon border, local ABC affiliate KRCR reported. 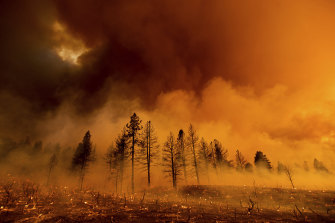 Smoke envelops trees during a bushfire in Doyle, California.Credit:AP

When the golfer went to chip out, their club struck a rock and sparks flew, fire investigators told the Redding Record Searchlight. Those sparks started a blaze on Wednesday that burned 4000 square metres before firefighters put it out.

“It’s just that dry,” investigator Ron Krznarich told the paper when explaining how a golf club could start a significant fire.

No one was injured in the blaze, though the golfer’s pride was likely bruised. 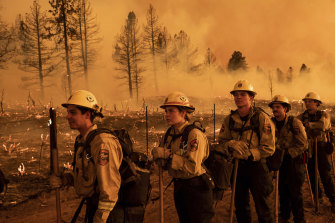 Firefighters from the California Department of Forestry and Fire Protection’s Placerville station battle a blaze in Doyle. Credit:AP

Although the fire started by the golfer was extinguished, firefighters have struggled to contain several others in the region between the Oregon border and the northern end of the Central Valley fuelled by a midweek heat wave that exacerbated already hot, dry conditions. Dozens of homes have been destroyed.

On Friday, Death Valley National Park in California recorded a staggering high of 54 degrees. If verified, it would be the hottest high recorded there since July 1913, when the same Furnace Creek desert area hit 57 degrees, which is considered the highest reliably measured temperature on Earth.

Two lightning-caused fires continued to burn on Saturday, US time, including one north of Lake Tahoe that showed no sign of slowing its rush north-east from the Sierra Nevada forest region. 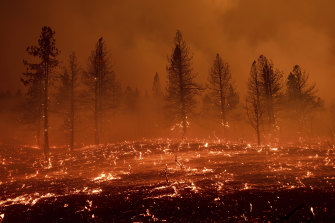 Embers blow across a field as the Sugar Fire, part of the Beckwourth Complex Fire, burns in Doyle.Credit:AP

The fire more than doubled in size from Friday to Saturday, sending up a massive cloud of smoke and ash that combined with the dry heat to create dangerous weather conditions for firefighters, authorities said.

Spot fires caused by embers leapt up to 1.6 kilometers ahead of the north-eastern flank — too far for firefighters to safely battle — and winds funnelled the fire up canyons full of dry fuel, where “it can actually pick up speed,” Cox said. The flames rose up to 30 metres in places, forcing firefighters to focus instead on building dozer lines to protect homes.

Firefighters usually take advantage of cooler, more humid nights to advance on a fire, Cox said, but the heat and low humidity never let up. The more than 1200 firefighters were aided by aircraft. But the blaze was expected to continue forging ahead. 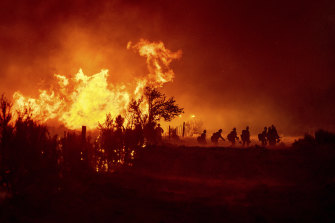 The fires across the western US states have followed a severe heatwave.Credit:AP

The air was so dry that some of the water dropped by aircraft evaporated before reaching the ground, she added.

“As long as it’s this hot and we have these low humidities, it’s kind of hard to tell when and where we’re going to catch this,” she said.

“That increases the velocity of the spread of the fire because the fire’s actually moving amongst the treetops,” she said. “Basically, it just runs across the trees until it runs out of trees.”

The blaze, which was only 8 per cent contained, increased dramatically to 222 square kilometers after fire officials made better observations.

It was one of several threatening homes across western states that are expected to see triple-digit heat through the weekend as a high-pressure zone blankets the region.

The National Weather Service warned the dangerous conditions could cause heat-related illnesses, while California’s power grid operator issued a statewide alert on Saturday evening to avoid disruptions and rolling blackouts.

The California Independent System Operator warned of potential power shortage, not only because of mounting heat, but because a wildfire in southern Oregon was threatening transmission lines that carry imported power to California. Governor Gavin Newsom issued an emergency proclamation on Friday suspending rules to allow for more power capacity, and the ISO requested emergency assistance from other states. On Saturday, Newsom issued another proclamation allowing the emergency use of auxiliary ship engines to relieve pressure on the electric grid.

Pushed by strong winds, the Oregon fire doubled in size to 311 square kilometers on Saturday as it raced through heavy timber in the Fremont-Winema National Forest near the Klamath County town of Sprague River.

Las Vegas late on Saturday afternoon tied its all-time record high of 47 degrees the National Weather Service said. The city has recorded that record-high temperature four other times, most recently in June 2017.

NV Energy, Nevada’s largest power provider, also urged customers to conserve electricity on Saturday and Sunday evenings because of the heat wave and wildfires affecting transmission lines throughout the region.

In north-central Arizona, Yavapai County on Saturday lifted an evacuation warning for Black Canyon City, 66 kilometres north of Phoenix after a fire in nearby mountains no longer posed a threat.

A wildfire in south-east Washington grew to almost 155 square kilometers as it blackened grass and timber while it moved into the Umatilla National Forest.

In Idaho, Governor Brad Little declared a wildfire emergency on Friday and mobilised the state’s National Guard to help fight fires sparked after lightning storms swept across the drought-stricken region.