It’ll be grim down south: How Southern England will become wetter than the North by the next century (but before then, we’ve got five days of rain!)

Meteorologists believe summers will be drier in Scotland and northern England than in the south by the end of the century.

Long-term projections from the Met Office show rainfall reducing in some parts of the north by up to 50 per cent.

But the modelling predicts whatever rainfall remains in the north will be more extreme than current weather, bringing greater risks of flash flooding. 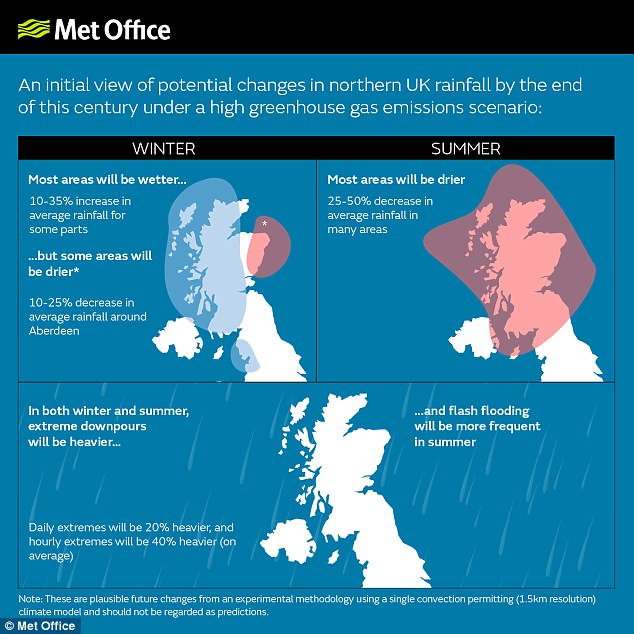 The south on the other hand is set for increased summer showers, which will also grow more intense.

Expected changes are being attributed to global warming and the calculations are based on the premise that increasing levels of greenhouse levels will continue being emitted.

Much of northern Britain is likely to see wetter winters if the climate change goes unchecked.

Heavy storms are projected to become more frequent by the end of the 21st century, the study found.

The Met Office used high resolution modelling of rainfall over 1.5km squares – the same scale as is used for weather forecasts – to examine the changes in rainfall in Scotland and northern England to the end of the century.

It found that daily average winter rainfall was likely to increase by 10 per cent to 35 per cent in parts of the Scottish Central Lowlands, western Scottish Highlands and the Lake District, but fall between 10 per cent and 25 per cent around Aberdeen.

In the summer, daily average rainfall is projected to fall across northern Britain, with many areas including the central belt of Scotland experiencing reductions of 25 per cent to 50 per cent.

Using the 1.5km resolution also enabled researchers to model the likelihood of localised storms which could cause problems such as flash-flooding. 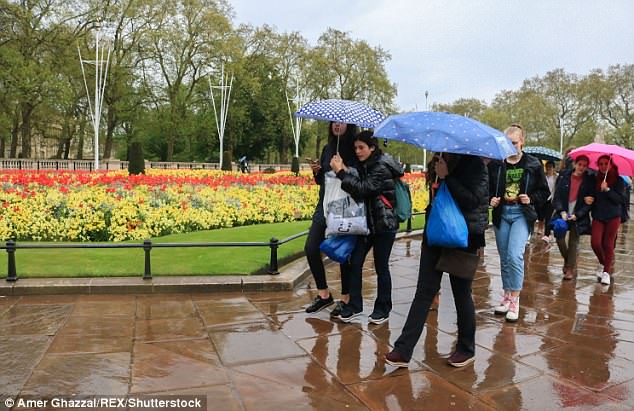 It could soon be grim down south as a result of global warming, meteorologists have predicted

High-intensity rainstorms that see 10mm (0.4in) or more of rain an hour are likely to become more frequent, the study found, while less intense rainy weather is set to become less common.

Steven Chan, a visiting scientist with the Met Office Hadley Centre, said: “Developing an improved understanding of rainfall patterns until the end of the century is vital as it allows governments to plan for potential impacts of drought or flooding events.”

The study, published in the journal Climate Dynamics, only uses one model so is not able to assess how likely the results might be, but does provide an initial look at the types of changes to rainfall patterns northern Britain could see with high greenhouse gas emissions, the Met Office said.

The research comes after an earlier Met Office study which looked at southern Britain.

Later in the year, work on UK climate projections will build on the approach used in the study while looking at a spread of potential outcomes and how likely they are to occur.

The research comes as parts of Britain face a deluge, with five days of rain on the way.

More than an inch of rain fell in parts of the West Country in the 24 hours to yesterday lunchtime, and almost an inch in South Wales.

Meanwhile, most areas of England and Wales were grey and wet – and the soggy conditions are set to linger across the country today too.

The South Coast and South West England are likely to clear up as the day goes on but could then be hit by heavy showers later on.