Iranian photojournalist, Yalda Moayeri, denounced President Trump’s use of her photograph in a tweet criticizing Iran’s leaders on the occasion of the 40th anniversary of the Islamic Revolution this week.

“40 years of corruption,” Trump tweeted in English and Farsi. “40 years of repression. 40 years of terror. The regime in Iran has produced only #40YearsofFailure. The long-suffering Iranian people deserve a much brighter future.

Moayeri took the iconic image on the last day of 2017 in front of Tehran University. It shows an anonymous student of the university who raises her left fist and masks her face with her other hand using her scarf in smoky surrounding, which according to the photographer was fire extinguisher spray, not tear gas.

The photo was taken during a series of protests around the country at the time which was triggered by stagnant economic situation, and led to thousands of arrests and at least 21 being killed.

However, seeing her image in Trump’s tweet made Moayeri feel “deep sorrow” and “shame,” as she wrote in an Instagram post, where she objected President Trump’s use of her photo on Tuesday.

“In other occasions, this photo had been used by opposition groups of the Iranian system, but seeing Trump tweeting it just made me determined to come out,” Moayeri said in an interview with ABC News.

“Because of his policies, I, my family and my friends are forced to live under sanctions that are devastating our lives,” she wrote on Instagram.

The photographer told ABC News that she did not object from a legal or copyright perspective, though. 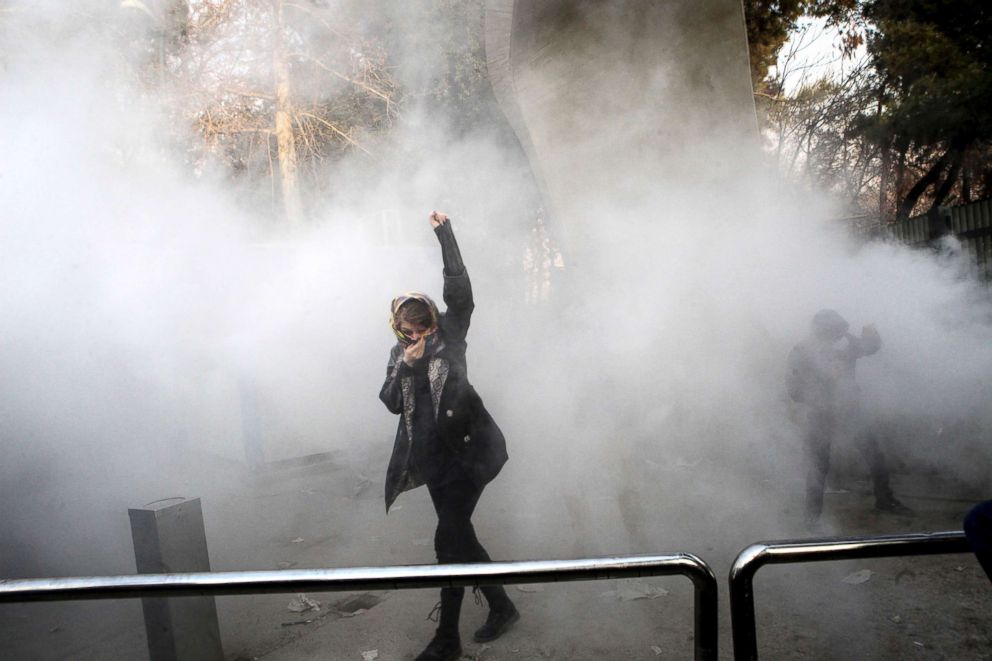 “I have sold my photo to the wires, and here I am talking from a very moral perspective which all comes from my personal experiences and the social responsibility I believe in,” she said.

Bringing up examples of Trump’s policies against Iran including the travel ban and reinstating economic sanctions, Moayeri said such moves would mainly damage ordinary people who are not specifically concerned about politics.

“Because of his (Trump’s) policies, I am surrounded by weddings and funerals hold on FaceTime. People are unable to join their beloveds when they need to be with each other,” Moayeri said.

“Besides, sanctions have complicated the situation and public discontent has frustrated people so much that they blame anyone who they think slightly supports the Iranian system,” she said.

Due to the risks and possible troubles that the photo of the student protester could bring her, Moayeri decided to remain anonymous at the time. It was not until six months later in June 2018 that she revealed her identity as the photographer of the iconic image by submitting it at the annual Iranian Photojournalists’ Association, IPJA. It brought her a first prize.

With the risks and dangers Moayeri went through for this picture, what bewildered her after posting the objection post on Instagram was the huge gap between the reactions she received. Besides those who appreciate her move, she said she is receiving many abusive comments for her objection to Trump’s tweet.

“Some opposition fans get my objection against Trump’s tweet as an explicit support of the current system in Iran,” Moayeri told ABC News.

“But there is a fine line here, criticizing one side of a quarrel does not necessarily mean you are supporting the other,” she added.