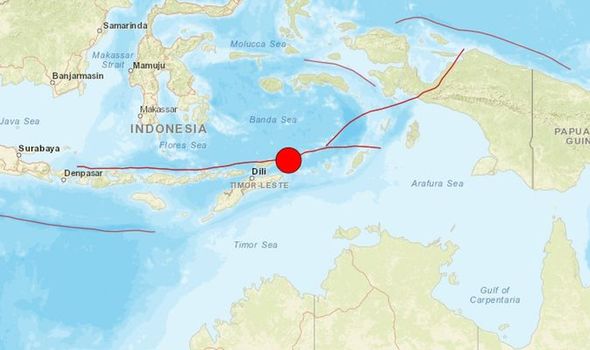 The extremely strong quake hit Kepulauan Barat Daya, some 113km northeast of Lospalos, Municipio de Lautem, Timor-Leste. It struck at 3.25am local time at an immediate and considerable depth of 200 km, according to the European-Mediterranean Seismological Centre (EMSC). That has since been downgraded slightly to a depth of 167km by the USGA.

A tsunami warning has not been issued for the surrounding islands following the earthquake.

The impact of the earthqake was felt as far as 600km away in Darwin, the capital of Australia’s Northern Territory.

Around 1,700 of its residents have reported feeling tremors early on Thursday, according to Geoscience.

The Volcano Discovery website said based on preliminary seismic data, the earthquake was likely felt by “many” people in the area of the epicentre.

But it should not have caused “significant damage”, other than objects falling from shelves and broken windows.

It added a second report issued later by Geoscience Australia (GeoAu) listed the earthquake as magnitude 7.5.