Jakarta: Indonesian President Joko Widodo may struggle to convince some that his cabinet shakeup amid a deteriorating coronavirus crisis means a shift in strategy in fighting one of Asia's most stubborn COVID-19 epidemics.

Jokowi, as the President is popularly known, inaugurated six new ministers on Wednesday, the most notable being his replacement of embattled health minister Terawan Agus Putranto with former banker Budi Gunadi Sadikin. Terawan was heavily criticised for his handling of the coronavirus, particularly for suggesting that prayer could help protect people. 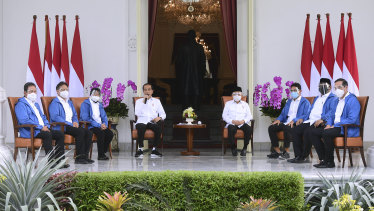 Epidemiologists have also called for stricter containment measures and enforcement of health protocols and pointed to shortfalls in testing and contact tracing. The country has recorded more than 685,600 cases and 20,400 deaths, Southeast Asia's highest caseload.

"The President has tasked me to focus on how we can handle the COVID-19 problem as quickly and as best as possible," said new health minister Budi, who moves from his post as deputy minister for state enterprises and head of Jokowi's economic recovery task force.

"The way we handle the pandemic from the start has been neither right, nor fast," said Dicky Budiman, a pandemic researcher at Australia's Griffith University.

While he hoped Budi could cut red tape hampering the pandemic response, Dicky said the situation could worsen if the government remains over reliant on a mass vaccination programme, rather than boosting tracing and testing.

Some in financial markets were more welcoming of the changes, however, including David Sumual, chief economist of Bank Central Asia.

Budi's management record made him ideal for overseeing a vaccination programme in the world's fourth-most populous country, Sumual said. Budi was a former head of Bank Mandiri.

"Markets will see this as quite positive," he said, predicting a stock market rebound after the Christmas holidays.

Jokowi was also trying to build public confidence, particularly with the popular Sandiaga, a vice-presidential candidate defeated in the 2019 election, and in choosing a new religious minister, said political analyst Edbert Gani.

Aaron Connelly at Singapore's International Institute for Strategic Studies said the shakeup represented "a few upgrades", but not enough to see a transformation in the government's coronavirus response.

Jokowi had long been sidelining Terawan, he said, and there was no indication the policy would change under a new minister.

"The strategy has been to await a vaccine, and that appears to be the strategy still."