India is running out of Covid vaccines amid a brutal second wave that has seen both cases and deaths in the country soar to record levels.

At least five Indian states are now reporting shortages of jabs and are urging the government to meet domestic demand, which it has previously done by restricting jab exports.

If exports are restricted further then it would harm global supplies – including 5million doses of AstraZeneca bound for the UK – as India typically produces 60 per cent of vaccines used worldwide and is home to the world’s largest vaccine-maker, the Serum Institute of India (SII).

COVAX, the programme which is response for delivering jabs to poorer countries, has now warned that deliveries of jabs from SII will be delayed until at least the end of the month due to ‘increased demand in India’.

Meanwhile a spokesman for the UK’s Department of Health was unable to say when 5million AstraZeneca doses due to arrive this month will actually turn up – but added that the UK is not expecting any doses from India after that.

The country’s second wave is thought to be driven by a double-mutated version of Covid – now present in the UK – which scientists believe makes the virus both more infectious and may reduce the effectiveness of current vaccines.

Today, India reported more than 261,000 new cases of Covid, its highest one-day toll of the pandemic so far – coming off the back of four straight days of record rises. 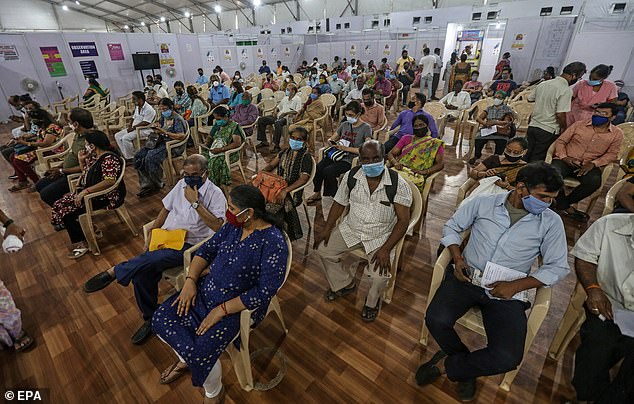 Five states in India have reported shortages of Covid vaccines amid a second wave that has pushed cases and deaths to record levels (pictured, people queue for jabs in Mumbai) 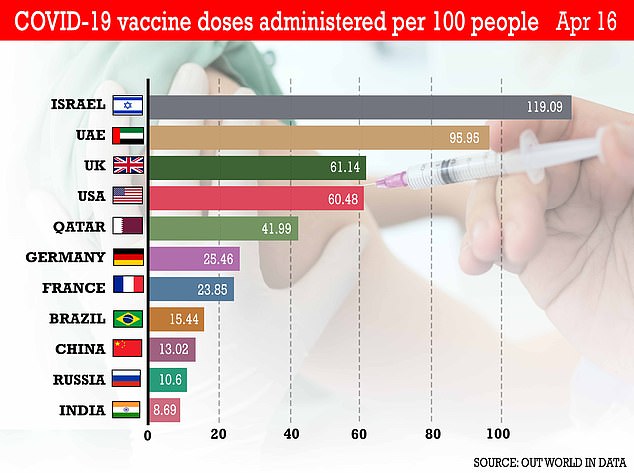 India is vaccinating some 3million people per day, topping most other countries, but its huge 1.3billion population means only a tiny proportion have been protected (pictured) 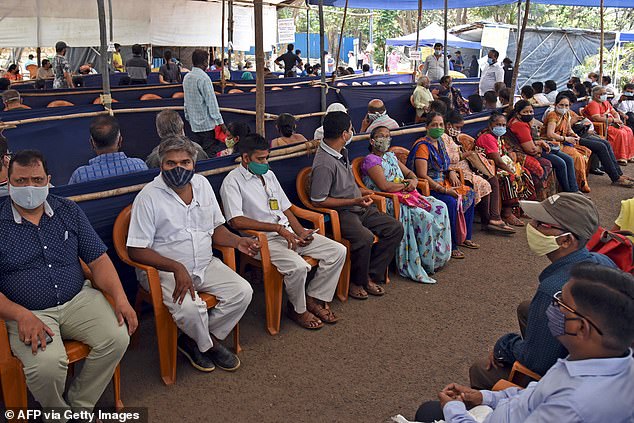 State leaders in India are now calling on the government to give them more supplies, raising fears that international exports will be restricted further (pictured, vaccine queues in Mumbai) 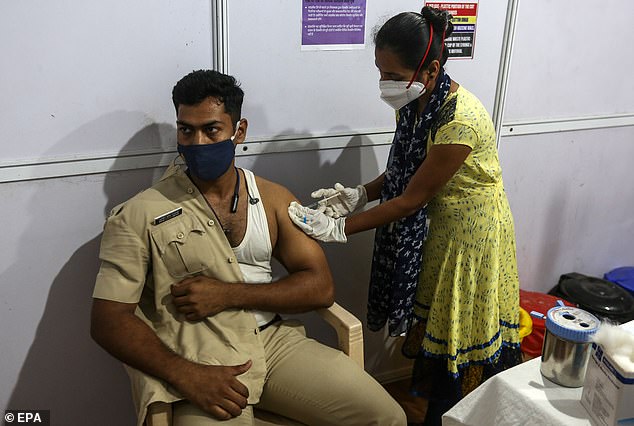 A policeman who is among priority groups invited for vaccination in India receives a jab in Mumbai, which has been hit hard in the second wave

Meanwhile its one-day death toll hit 1,501, also a record aside from one day in March last year when more than 2,000 deaths were added due to a data error.

UK ‘reviewing’ whether India should be added to travel red list

The UK government is reviewing whether India should be added to the UK’s travel red list as cases soar, driven by a new variant that has already arrived in Britain.

Environment secretary George Eustice told the BBC’s Andrew Marr that the travel red list is kept under ‘constant review’ – but gave no indication that guidance might be changed.

Scientists fear that India’s brutal second wave of Covid is being driven by a double-mutated version of the virus that makes vaccines less effective and the disease more infectious.

Danny Altmann, a professor of infectious disease at Imperial College London, has warned that the country should immediately be added to the travel red list to protect Britons from the variant.

But on Sunday, Mr Eustice said: ‘We’re allowing people in from India provided they have had a pre-departure test, provided they then quarantine – albeit not in a hotel or a designated facility, but quarantine at home – and then have a test at two and eight days.

‘But we keep this under regular review. We take the advice of the scientific experts on this. If the advice is we should change that and move to the red list we would.’

Separately, he told Sky News that it is ‘appropriate’ for Boris Johnson to go ahead with a visit to India later this month, saying measures will be taken to ensure it is ‘Covid secure’.

Maharashtra state, India’s second-most populous and home to the commercial capital of Mumbai, has been hardest hit by the second wave – with local lockdowns now in place in an effort to keep cases down.

That has caused concern among scientists because Mumbai was thought to have achieved natural herd immunity after being hit hard in the first wave.

If the new mutant virus can breach natural immunity then there are fears it could also evade or weaken the protection offered by vaccines.

India’s rapidly increasing case total has also led to the belief that the new variant is also more infectious than previous versions of the disease.

Studies are now underway, including in the UK, to determine whether those two assumptions are in fact true.

India’s vaccine drive is reliant on two jabs, the Oxford/AstraZeneca vaccine that is also being widely used in this country, and the domestically-produced Bharat Biotech/Indian Council of Medical Research jab – known as Covaxin.

The country is currently administering around 3million doses of vaccine per day, well ahead of most other nations, but it has a population of 1.3billion – meaning only a tiny share of the total has been protected.

Around 105million people have been given at least one dose of vaccine, according to government data, which is just 7.5 per cent of the total population.

Some 15million people have been given both doses of vaccine, or just over 1 per cent of the total.

State leaders in Maharashtra, Punjab, Odisha, and two other states have now warned that they do not have enough vaccines to cover the number of appointments handed out, according to CNN.

They are now requesting more supplies from the federal government, but ministers have so-far pushed back – insisting that supplies are plentiful and that the situation is under control.

The country’s health minister and home minister both accused state leaders of trying ‘to divert attention from… repeated failures to control the spread of pandemic.’

Nevertheless, news of shortages have raised fears that vaccines meant for export are likely to remain in India, after the government began holding back supplies in March.

One of the hardest-hit programmes is likely to be COVAX, a combined international effort to get jabs to low and middle income countries.

The initiative was supposed to receive 200million doses of AstraZeneca from India bound for 92 countries, but has so far received just 28million.

COVAX is now in talks with the Indian government to try and get hold of two deliveries – one of 40million doses and another of 50million – that were due to be completed in March and April.

India is now leading the world in terms of the number of new cases with more than two million in the past month, as the international Red Cross warns the speed at which cases are rising across South Asia is ‘truly frightening’.

Delhi chief minister Arvind Kejriwal said it was impossible to know when the virulent new surge would peak.

‘The situation is grim and worrisome,’ he said, highlighting shortages of oxygen and hospital beds.

Prime Minister Narendra Modi held a special pandemic meeting late Saturday to discuss the rapidly-deteriorating situation, ordering new measures to find beds and speed up the delivery of oxygen and drugs such as the anti-viral Remdesivir.

After a national lockdown last year ago led to an economic slump, the Indian government is desperate to avoid a second stoppage. But Delhi has now joined Mumbai in ordering all but essential services to close.

Landmarks such as the historic Red Fort where tens of thousands of people would normally gather were deserted.

Police checked many of the few cars that strayed onto the streets of the city of more than 20 million people where restaurants, malls and gyms were all closed.

‘Don’t panic. All essential services will be available through the weekend,’ Kejriwal said.

Uttar Pradesh state, home to some 240 million people, has ordered a one-day lockdown on Sunday.

The northern state of Uttarakhand has restricted gatherings to 200 people. 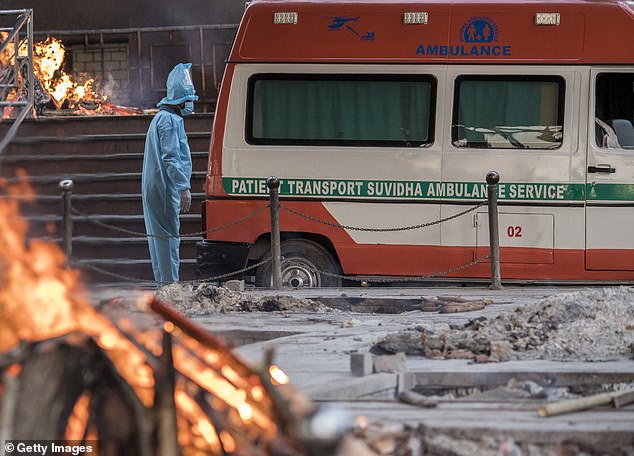 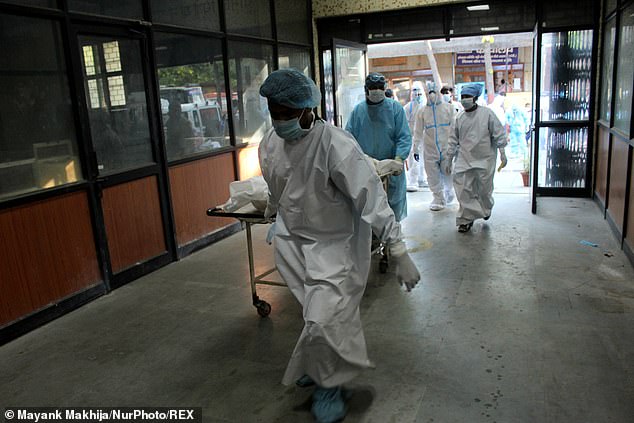 It exempted the huge Hindu Kumbh Mela festival in Haridwar but pressure has grown to halt the ritual bathing that has drawn up to 25 million people since January, including some 4.6 million this week alone.

More than 1,600 people tested positive for coronavirus in barely three days this week and one of the leading Hindu sects announced that it considered the festival now finished.

The latest round of voting also went ahead in the West Bengal state election with long queues forming outside polling stations. Rival parties have been holding huge rallies in recent weeks again fuelling super-spread fears.

In the state capital Kolkata, railway employee Samaresh Tapna fell sick after attending one such gathering and was hospitalised.

‘I felt angry with myself… I cursed my fate,’ the 42-year-old told AFP.

Social media is full of horror stories of desperate calls to help a loved one needing hospital treatment for Covid-19 or other complaints.

‘I lost a cousin on Saturday. He was not admitted after a stroke. Tried 4 hospitals,’ read one message on a Delhi neighbourhood WhatsApp group this week.

India’s drive to vaccinate its 1.3 billion people has also hit obstacles, with just 117 million shots administered so far and stocks running low, according to some local authorities.

‘This is a wake-up call to the world. Vaccines must be available to everyone, everywhere, rich and poor to overcome this terrible pandemic,’ said Udaya Regmi from the International Federation of Red Cross and Red Crescent Societies (IFRC), describing the surge across South Asia as ‘truly frightening’.

‘We must redouble our efforts to contain this disease as too many lives are at stake,’ Regmi added.