Is this the last fixer-upper in Highgate? Incredible time capsule house boasting its original 1950s mint-green kitchen and tucked away in London’s A-list borough goes on sale for £2.5m – and could be worth twice that

A mid-century time capsule house, nestled between Queen Anne and Georgian era homes, could be worth twice as much as its £2.5million asking price if it is knocked down and replaced with a larger, more modern home.

The two-storey 1950s building in fashionable Highgate, where neighbouring homes are valued at as much as £10million, still features its original kitchen.

There is also a cupboard between the living room, bedroom and balcony where a 1960s TV set on a turntable could be viewed from each room.

And the house, which could be worth double its current selling price if knocked down and rebuilt, according to estate agents Day Morris, sits in the same London borough as actor Jude Law and supermodel Kate Moss.

Built for a GP and his wife 65 years ago the couple’s 91-year-old son has been living in the house for the past 20 years. 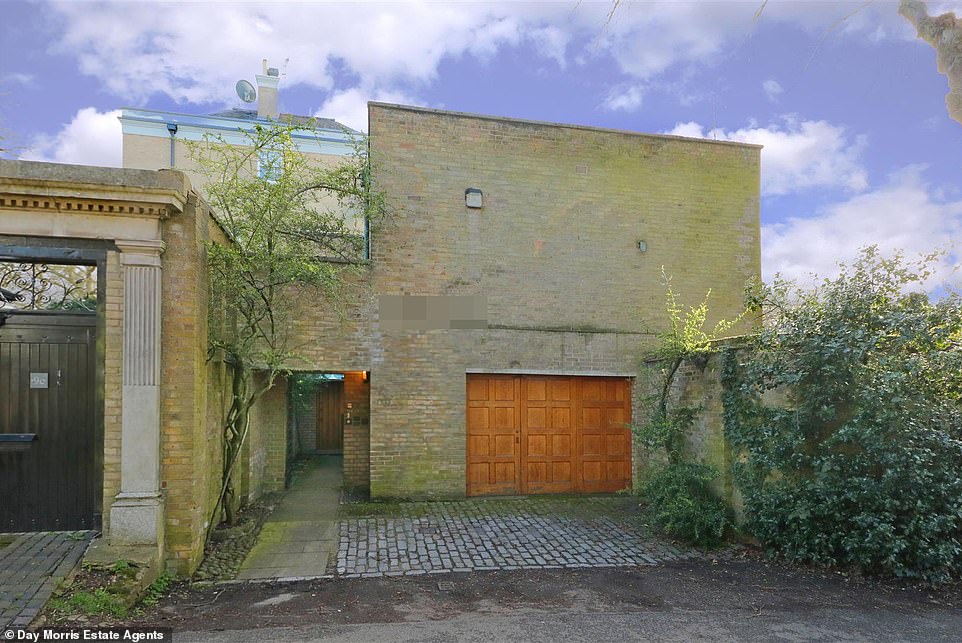 The two-storey 1950s home in fashionable Highgate features its original kitchen fit with a folding bench and screen to partition the dining and cooking areas. It is also the only house on the street with a driveway and a garage even though its 91-year-old owner does not own a car 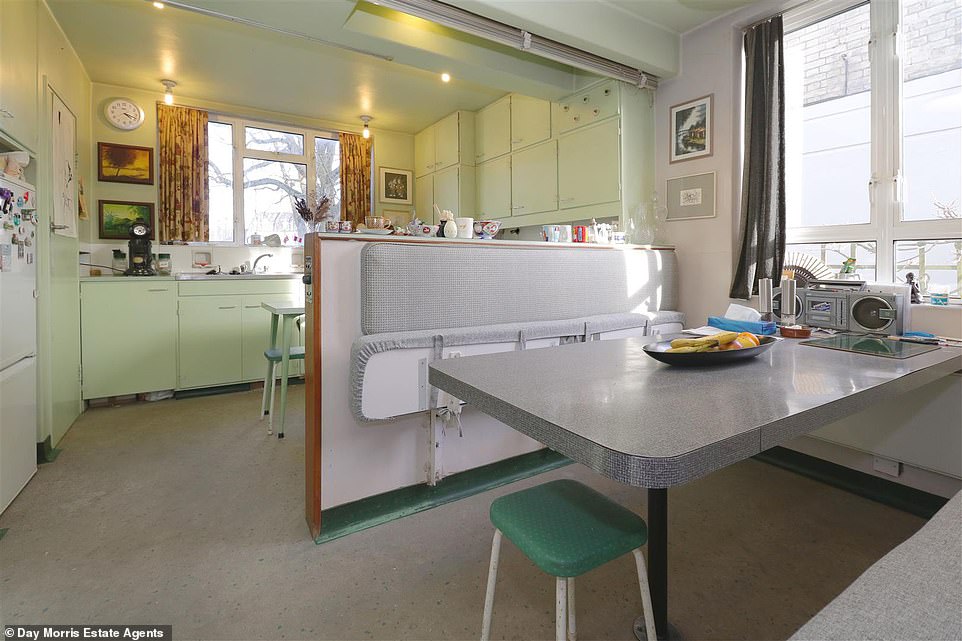 The house has clocks built in to its walls and the kitchen features a table with two folding benches to save space. All the original mid-century mint-green fittings are still in place

Influenced by their son’s life in Stanford, California, the house is full of what were state-of-the-art features – including underfloor heating and a foot-pedal on the toilet.

He said: ‘One of the things I said was to try and have a foot pedal for the loo,’ he says. ‘They also have a lot of underfloor heating in the States so I communicated that and he put it in. It was absolutely useless, so when I moved here the first thing I did was put in central heating.’

It’s multipurpose study used to be a table tennis room and has eight ceiling light fittings to illuminate the table where the current owner’s father used to play every Friday until his death. 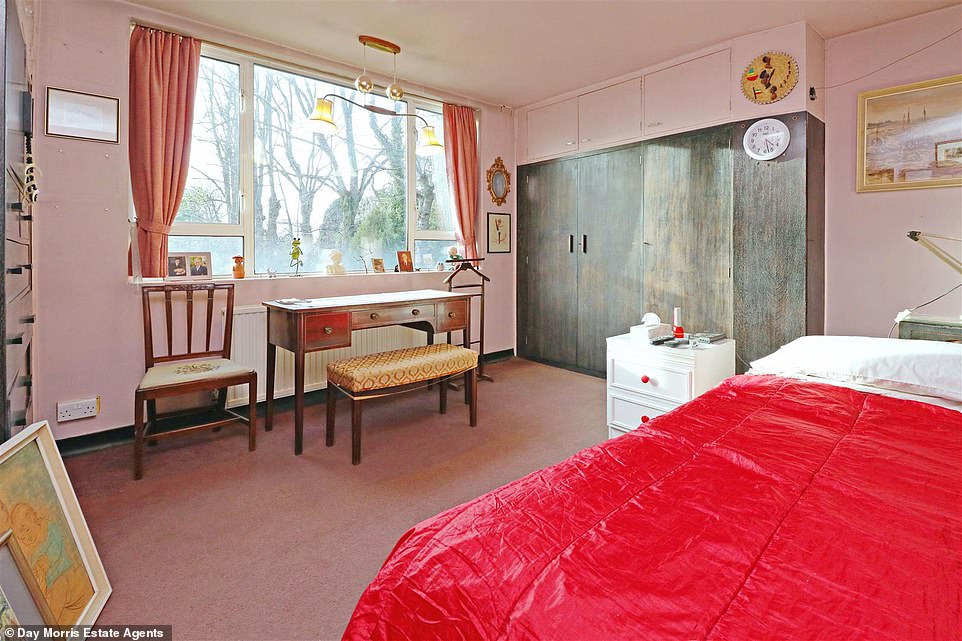 A cupboard between the living room, bedroom and balcony (left) used to house a 1960s television set on a turntable – allowing it to be viewed from either of the rooms it sat between 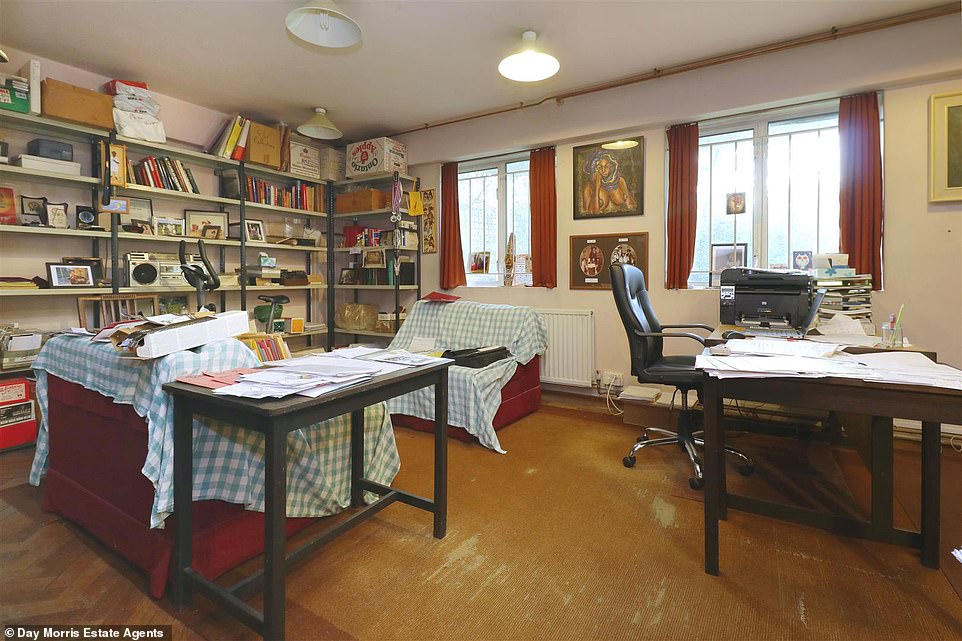 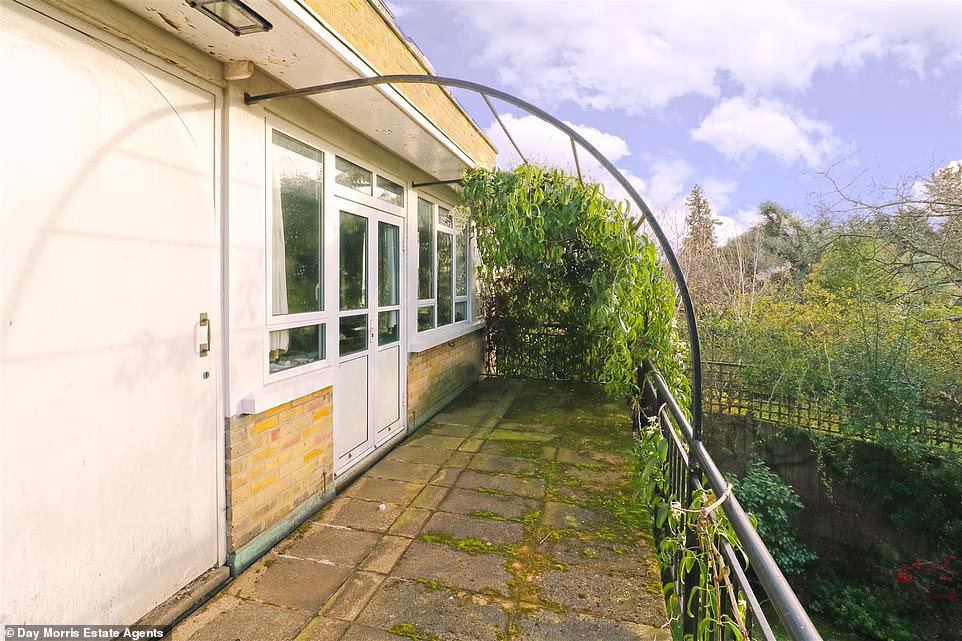 A large balcony leads from the living room and occupants of the house can look out on to the modest sized grassy garden below. A future owner could knock the existing building down and extend the house further on to this land

The only other piece of furniture in this room used to be a cupboard the owner said ‘contained the chocolate of the house – my father was a chocolate addict’.

And a cupboard between the living room, bedroom and balcony used to house a 1960s television set on a turntable – allowing it to be viewed from either of the rooms it sat between.

The house has clocks built in to its walls and the kitchen features a table with two folding benches to save space – and all the original mid-century mint-green fittings. 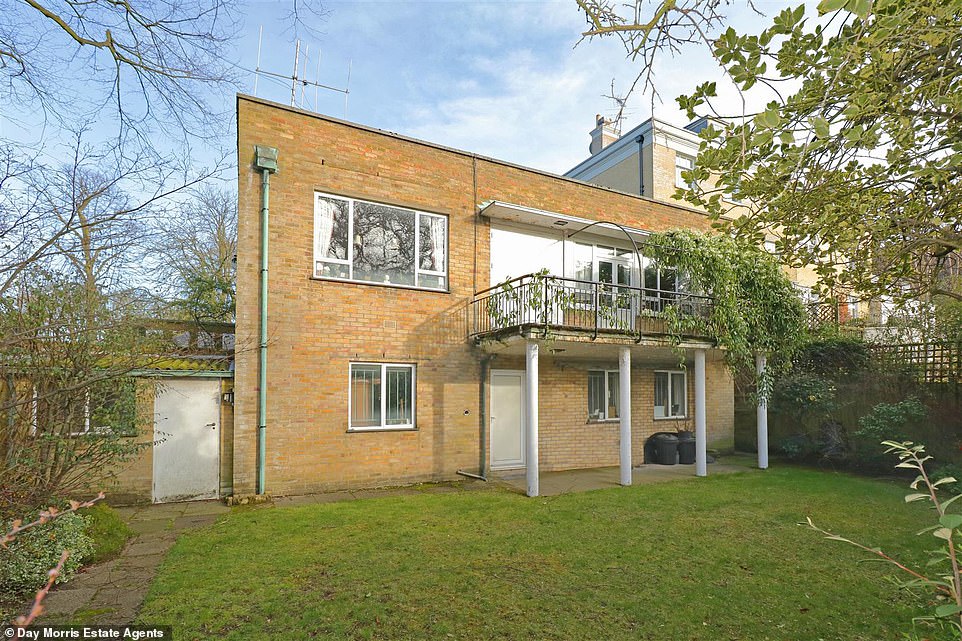 The mid-century house is surrounded by Queen Anne and Georgian homes built 200 years ago. The house could be double what is it currently worth if it is knocked down and rebuilt 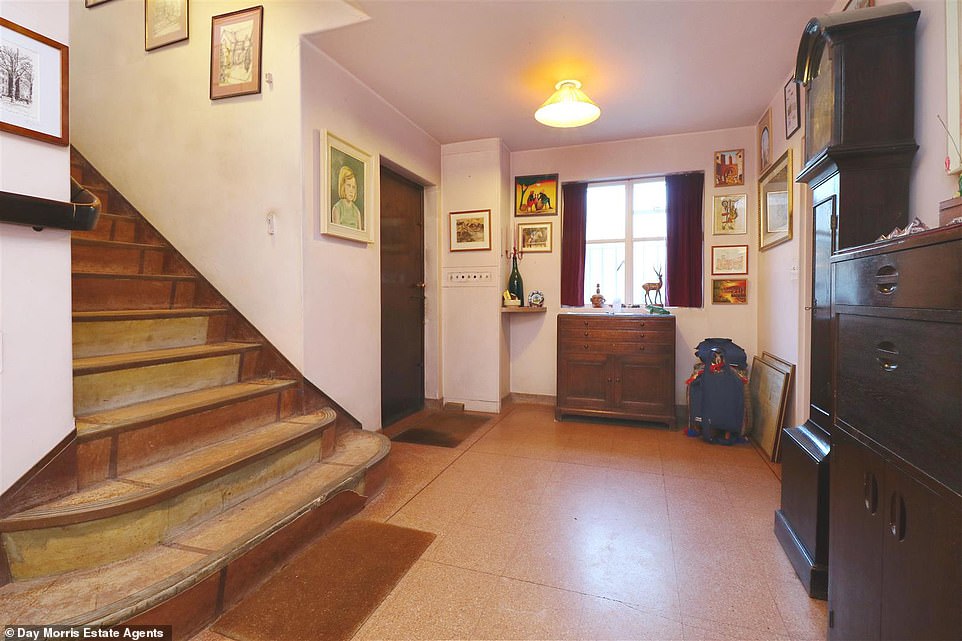 A large entrance hallway leads to the upstairs areas of the house via a pealing lino staircase. An imposing old grandfather clock stands opposite the staircase and multiple works of art decorate the walls 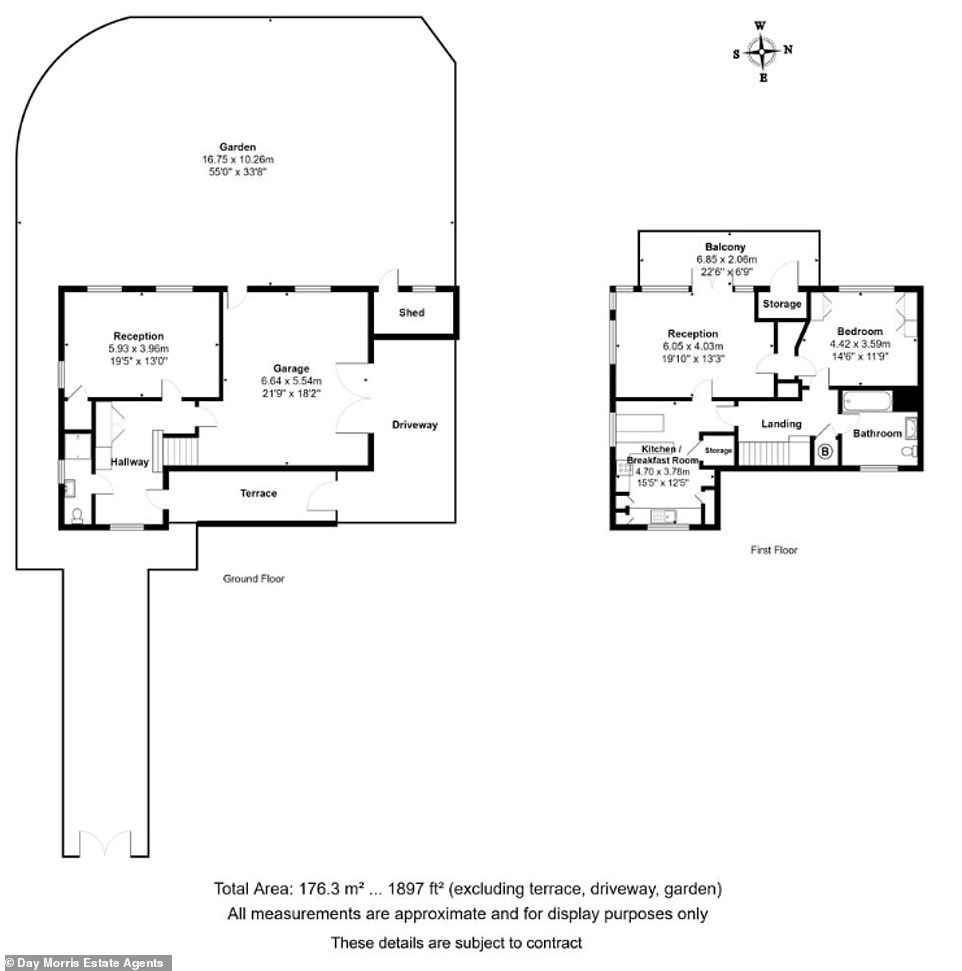 The garden is the same size as the one-bedroom home. On the ground floor is a terrace, large driveway, shed, garage, hall and reception room. There is another reception room on the first foor. The first floor is the main area of the house with a bathroom, bedroom, kitchen/breakfast room, storage and a balcony

The owner added: ‘The kitchen-dining room was in those days very original — he more or less designed the kitchen, with a bit of help from my mother, I suspect. The larder amuses people because they’ve never seen a larder before — it’s not really changed at all, except some of the food.’

But the original kitchen and pink bathroom could be destroyed and the property double in value if it is knocked down and rebuilt.

Steve Day, of Day Morris who are handling the sale, said: ‘Subject to planning the house could be knocked down and started again or it could be converted into a three- or four-bedroom house with a downstairs kitchen and living room leading out into the garden.’

‘It’s very difficult to say if it were to be knocked down how high tech it could be and what it would be worth. Because of the history of the road it is on and the high profile celebrities who live there. Houses could go to up to £10million but this would not be worth that much because of its size.

‘I think you could get planning permission to build on to the garden but it’s hard to say what it would be worth.’ 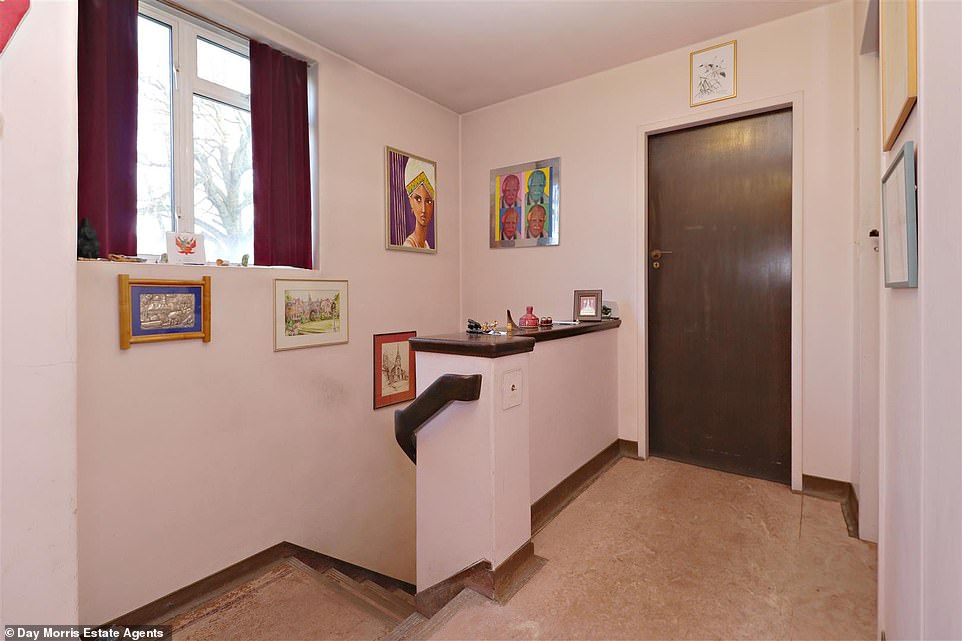 At the top of the stairs three doors lead to the living room, bedroom, bathroom and the boiler. A large window lets light in to the space 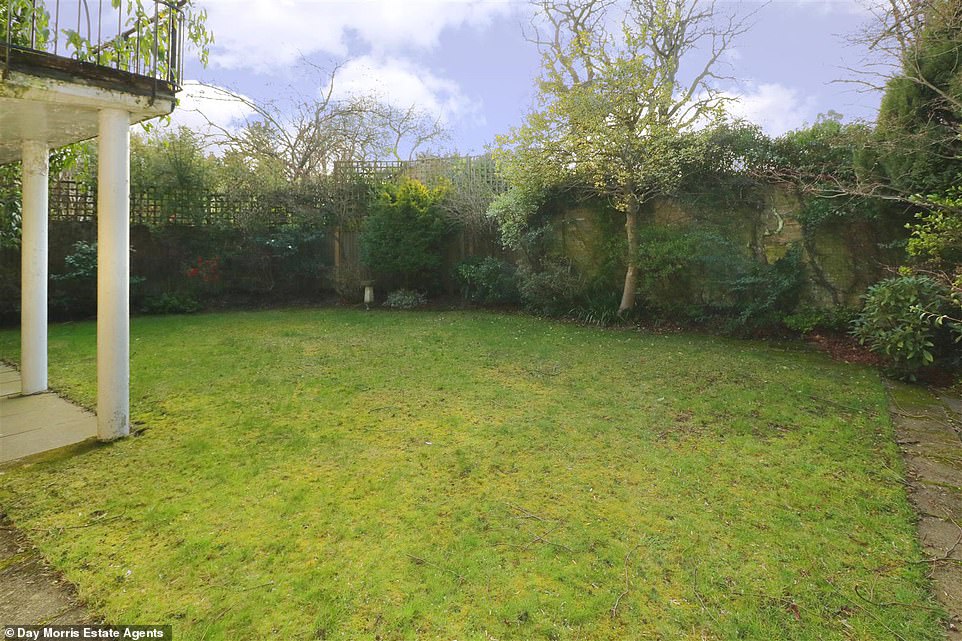 A large well-kept garden sits at the back of the house. The space it offers to anyone looking to rebuild the current home could add thousands to the value of the property 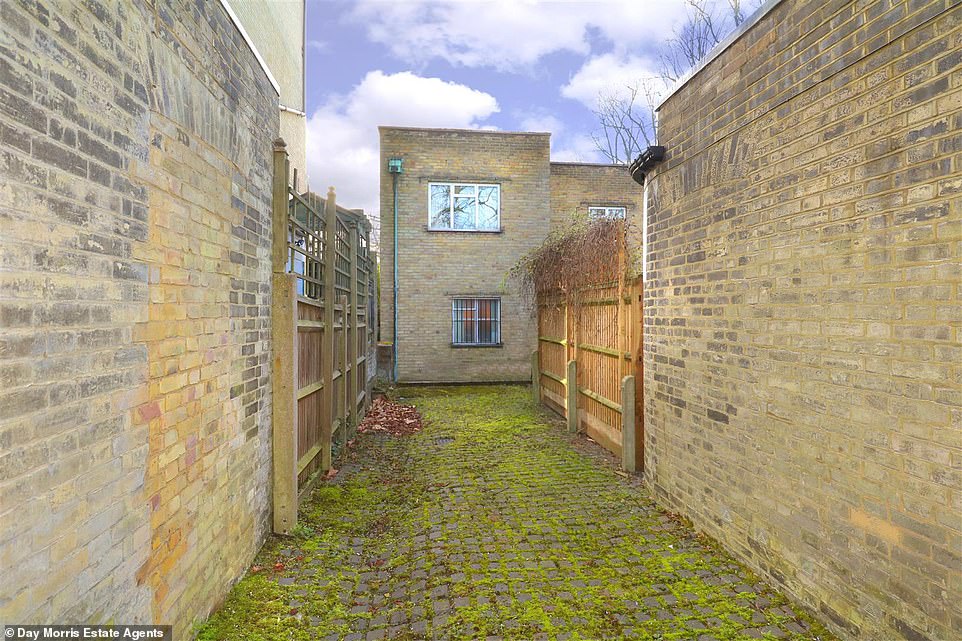 A terrace area sits at the side of the house. This additional space gives the house slight distance from neighbours which allows any future owners more privacy 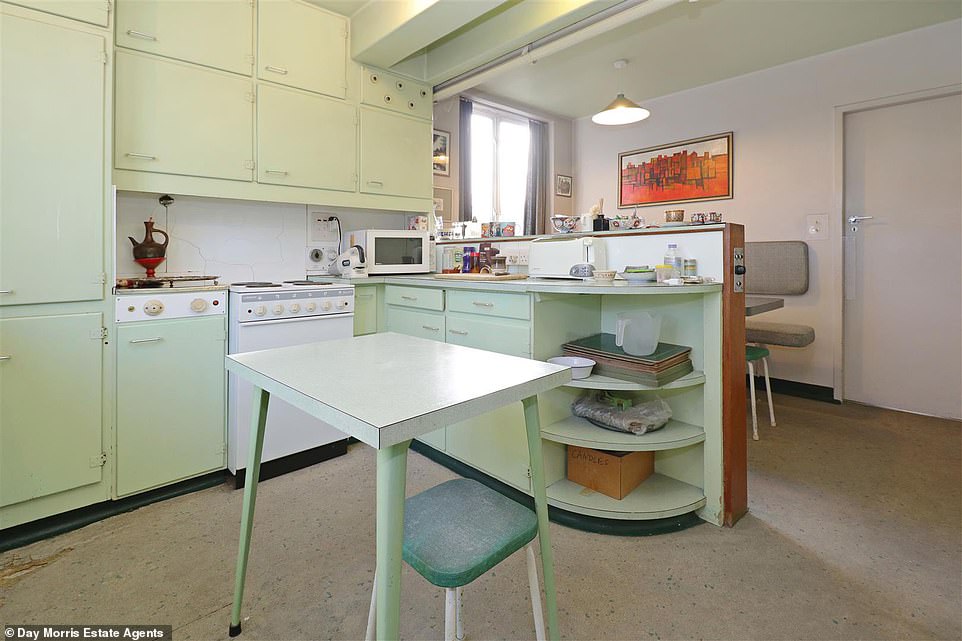 The kitchen has not changed since it was built in the years following the end of World War Two. A screen pulls down to separate the kitchen and eating areas as the current owner’s mother did not like her family watching her cook 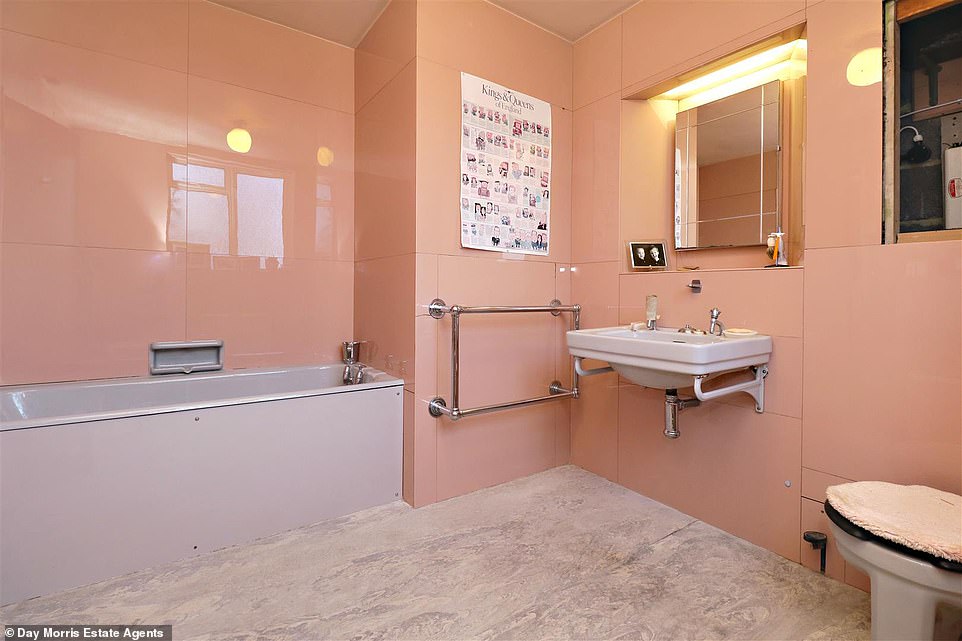 The large bathroom features a stylish American inspired foot pump to flush the toilet. There is also a large bath, towel rack and sink. The space the house offers could easily fit another bedroom if the future owner chooses to renovate 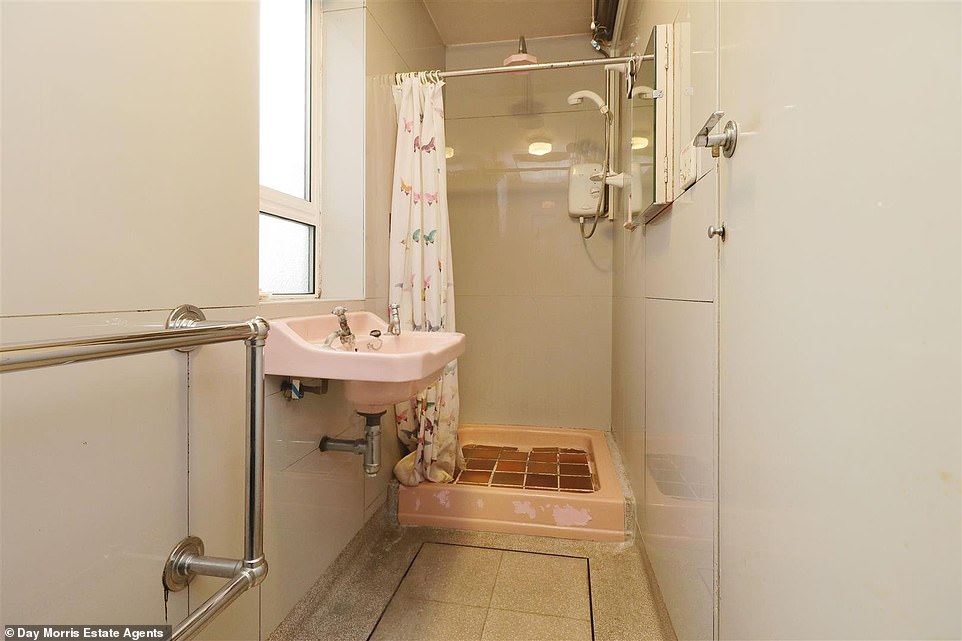 An aged shower and sink is on the ground floor leading from the hallway. Steve Day, of Day Morris who are handling the sale, said: ‘Subject to planning the house could be knocked down and started again or it could be converted into a three- or four-bedroom house with a downstairs kitchen and living room leading out into the garden’ 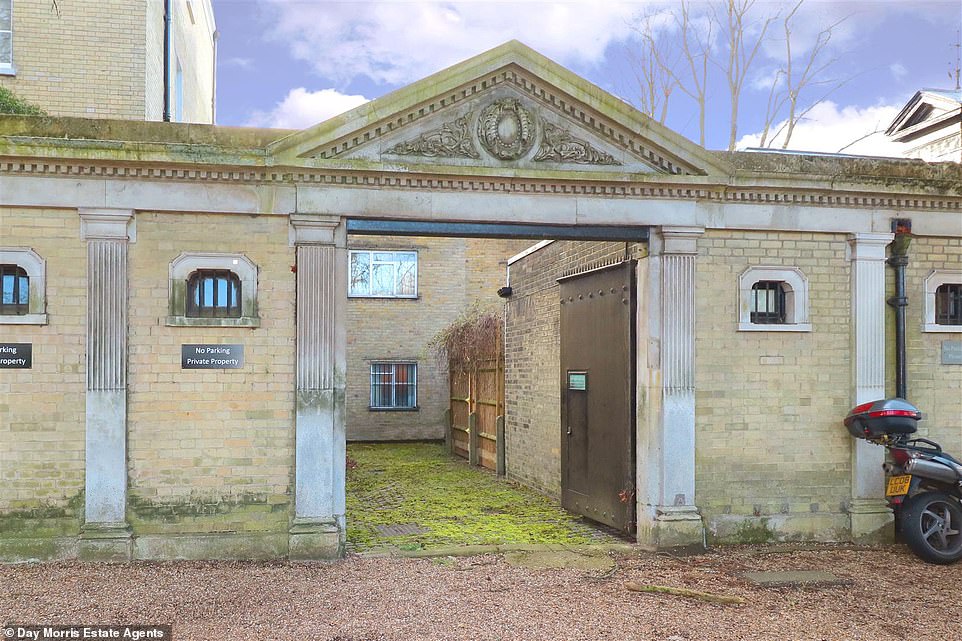