Washington: Raising the prospect of his own impeachment, President Donald Trump warned during a television interview on Thursday that his removal from office would hurt the economy.

"If I ever got impeached, I think the market would crash," Trump said during an interview with a Fox and Friends host.

"I think everybody would be very poor. Because without this thinking," he continued, pointing a finger at his head, "you would see, you would see numbers that you wouldn't believe in reverse."

"I don't know how you can impeach somebody who's done a great job," the President said, later adding that he gave his presidency an A+ rating.

The interview was recorded just before press secretary Sarah Huckabee Sanders' staccato performance on Wednesday in the White House briefing room, where she asserted repeatedly that Trump "did nothing wrong".

She was responding to questions about the stunning events of Tuesday, one of the worst days for the Trump presidency. 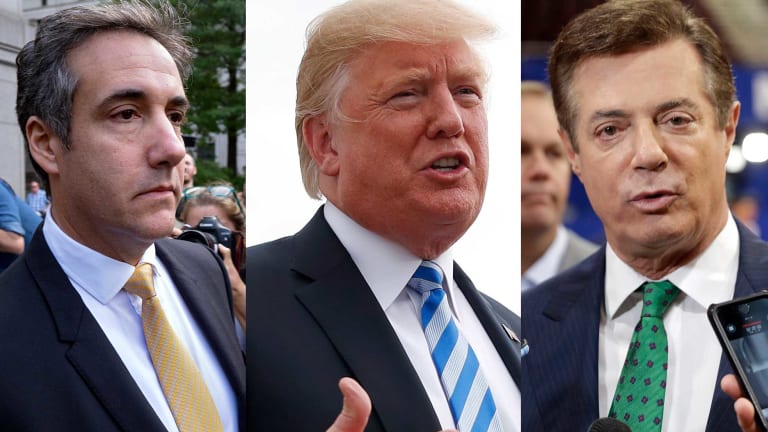 At the same time that former Trump campaign chairman Paul Manafort was convicted of fraud and tax evasion, Michael Cohen, the President's long-time fixer and lawyer, pleaded guilty to financial cimes and implicated the President in committing a crime to win the election.

Cohen claimed in a Manhattan federal court that Trump directed him to pay hush money in the final weeks of the 2016 presidential election to women claiming to have had affairs with Trump.

Because Justice Department policy holds that a President cannot be charged with a crime while in office, Cohen's claim has prompted rising talk about the prospect of Trump's impeachment, just two months ahead of November's midterm election to decide which party controls Congress.

Democrats' capture of a House majority, as many observers predict, would greatly increase the likelihood of Trump's impeachment.

In the interview, Trump complained about Cohen pleading guilty and lamented that his former fixer, who once claimed he'd take a bullet for his boss, has turned against him. "It's called flipping and it almost ought to be illegal," Trump said.

He suggested that Cohen, who faces four to five years in prison for tax evasion, bank fraud and violating campaign finance law by the hush-money payments, took a plea deal to receive a shorter sentence.

"They go from 10 years to they're a national hero," he said. "They have a statue erected in their honour. It's not a fair thing."

In contrast, Trump praised Manafort, who has not cooperated with investigators and remains jailed.

With Manafort facing years in prison on his conviction, speculation has risen that he might cut a deal to cooperate with prosecutors as he prepares for a second trial next month on charges related to his lobbying on behalf of a former government in Ukraine.

Trump was asked if he would consider granting Manafort a pardon but he didn't answer the question.