In 2017 Dmitry Ananiev was at the peak of his success. He and his brother Alexei owned a bank, an IT firm and an office complex overlooking the Moscow River. There was a Russian art collection (Alexei’s), a private plane and – of course – a yacht. Forbes put Ananiev’s fortune at $1.4bn. For seven years he served as a senator in Russia’s upper chamber.

Three years on, Ananiev’s circumstances have changed dramatically. In late 2017 the authorities seized his bank, Promsvyazbank, alleging holes in its balance sheet. Russian prosecutors accuse him of fraud and money-laundering. A court in London has frozen his assets. Angry Russian investors say he ripped them off and misrepresented the bank’s financial health.

Ananiev, however, says his case is a textbook example of how any businessman in Vladimir Putin’s Russia can fall into the mincer. “I’m presented as a criminal. It doesn’t connect in my head,” he says, speaking in his first interview with a western newspaper since he fled Moscow two years ago. “It’s a really unpleasant feeling when you see your country trying to hit you.”

In recent years there has been a steady stream of exiles from Russia to the villas and mansions of Cyprus, Monaco and Mayfair. Some of them are long-term opponents of Putin, who last month unveiled constitutional plans to extend his rule indefinitely. Others from Russia’s ruling inner circle suddenly develop an opposition voice after going abroad.

Ananiev claims he is in the independent camp, having built up a successful business over 25 years, only to see the state whisk it away. Since 2018 he has been living in comfortable exile in Cyprus. His home in Limassol is a colonial-style, bougainvillea-covered property overlooking the sea, with a garden of palms, spiky pines and sparrows.

In his analysis, KGB-trained officials with little understanding of the market are ruining Russia. The Kremlin has taken strategic areas of the economy under quasi-state ownership – first oil and gas, and from 2010 onwards, banks, he says. The method involves gobbling up private assets. Officials, however, insist they are merely cleaning up corrupt crony-run banks, in a sector that got out of control.

Ananiev says his problems began around 2015 after the west imposed sanctions on Moscow. Russia’s central bank – on whose supervisory board he sat – decided to help the country’s struggling defence industry. Their idea was to nationalise Ananiev’s privately owned bank, which he founded in 1995, and make it a special lender to the military.

“They told me several times. If you don’t [sell], a criminal case awaits you,” he says. He received death threats. They were delivered by phone and email. Suspicious cars followed him around. As the pressure grew, Ananiev developed heart problems. He blames this ugly campaign on Russia’s security agencies and the “oppressive machine of the state”.

In December 2017 the central bank took over Promsvyazbank, saying it was undercapitalised and loaded with bad risk. Ananiev fled to Cyprus with his family, including his 85-year-old mother. His brother stayed in Russia for another year trying to salvage their business empire. Their assets, including another bank, Vozrozhdenie, were all lost. Alexei is now in London.

A former insider, Ananiev is reluctant to criticise Putin directly. But he describes Russia’s political system as a “one-man show” and says a terrified elite wait on the president’s every decision. Five well known close friends of Putin are in charge, he says. Anyone who has an independent position is vulnerable to arrest. “It’s only a matter of time,” he says.

The Kremlin’s statist approach has led to weak economic growth, with Russia’s GDP smaller than Italy’s, he argues. With its vast natural resources Russia could be the world’s richest country. Instead, it is in the grip of decline and stagnation. It is currently unable to produce anything the world wants to buy, he says. Ordinary Cypriots – with fewer natural advantages – are better off.

Putin’s hold over power in Russia

Boris Yeltsin sacks his cabinet and appoints Putin, a political neophyte who headed the main successor to the KGB, as his acting prime minister and heir apparent.

Yeltsin stuns Russia and the world by using his traditional new year message to announce his resignation and hand his sweeping powers, including the nuclear suitcase, to Putin.

Putin wins a surprisingly narrow majority in his first presidential election, taking 53% of the vote and avoiding a second round run-off.

Putin consolidates his centralised control of power by cruising to a second term as president with 71% of the vote, having limited press access to his opponents and harassing their campaigns.

Putin is prevented by the constitution from running for a third term as president. The First deputy prime minister Dmitry Medvedev is elected in his stead. One of his earliest moves is to appoint Putin as prime minister, leaving little doubt that the two men plan, at the very least, to run Russia in tandem.

Amid widespread allegations of vote-rigging, Putin returns to the role of president, taking 63.6%. Medvedev becomes his prime minister. “Putin has named himself the emperor of Russia for the next 12 years,” says  protest leader Alexei Navalny.

Putin is re-elected until 2024 with 77% of the vote, amid high tensions between London and Moscow over the Salisbury nerve agent attack. Opposition activists highlight a number of cases of vote-rigging and statistical anomalies.

A Moscow court has demanded his arrest and Ananiev is consequently nervous about leaving Cyprus. He points to the fate of Sergei Skripal – the former GRU officer poisoned in 2018 in Salisbury – and to the assassination last August of a Chechen exile in a Berlin park. “The security agencies can hit anybody without evidence. They create the evidence,” he says.

As a senator Ananiev represented the Yamal region of north-west Siberia. In 2013 he quit the upper chamber, unhappy – he says – that it rubber-stamped laws. He describes Russian politics as a “muppet show”, devoid of meaningful debate. “At least with the muppet show it’s possible to change the muppets once they get older,” he notes. 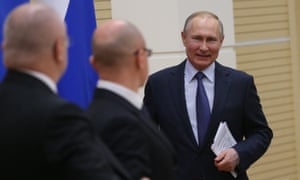 Being an ex-billionaire has its upsides, Ananiev says. He gets to spend more time with his wife, Lyudmila, and their five children, whom he previously only saw on Sundays. He says his Forbes ranking always felt “unreal”. Now he is able to jog, fish off his “small” yacht, and read fiction. A favourite author is Nikolai Leskov, a contemporary of Tolstoy’s, who wrote short stories set in the Russian provinces.

Ananiev says separation from his motherland has been painful. A tall, imposing, bearded figure – who speaks fluent English – he is deeply religious. Before settling in Cyprus he took advice from a 94-year-old monk living on Mount Athos in Greece. “I asked for his blessing,” he says, adding that being cut off from his Orthodox roots has been hard.

Whether hero or villain, Ananiev’s story is far from unique. He estimates that the most educated part of Russian society – “maybe 3-5% of the population” – has left the country. “This process is increasing,” he says. Young people, activists, academics – all have moved abroad, with the exodus becoming a flood after Putin returned in 2012 for a third presidential term.

Sergei Guriev, an economist who himself fled Moscow and is now based in Paris, said all Russian banks had struggled in recent years because of sanctions and depressed growth. “The Russian government did the right thing in taking over private banks. But it didn’t remove the management of bankrupt state banks and created unfair competition,” he said.

In response to embezzlement accusations, Ananiev has taken legal action of his own in London – where bondholders have sued him – and the Netherlands. There is little prospect of him getting his assets back, even if court judgments go in his favour. He says he is fighting to “return” his name and reputation, following a blizzard of negative stories about him in Kremlin-friendly media.

Ananiev says he came from an ordinary Soviet family, with his mother an engineer and his father a specialist repairer of watches. In the 1990s oligarchs bought state assets at bargain basement prices. He says he was never one of those and insists he grew his businesses from scratch. His IT firm, Technoserv, and other holdings employed 100,000 people. “We paid salaries on time, even in times of crisis,” he says.

Despite his privations, Ananiev recognises he is lucky. But he observes: “You can’t be rich if your country is in the shit.”