Cricket coach, Rhys Upton, puts the face to research that has shown 2020 has triggered grave mental health issues for many young people.

The 22-year-old has lost three mates his age or younger to suicide. He knew each through sports clubs, and has battled to deal with their passing while "just kind of there by myself with my thoughts in my room for weeks on end".

He describes the mental health impact of 2020 as putting "cracks" in the mask many young men wear. 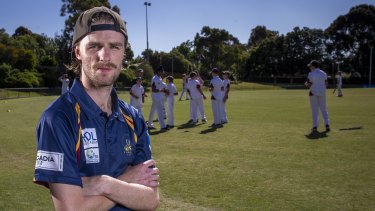 Cricket coach Rhys Upton encouraged mates at his cricket club to speak up about mental health after losing three friends in their early 20s to suicide this year.Credit:Wayne Taylor

It was when he could not get out of bed, wasn't eating properly and found himself lying to his sister that he just had an upset stomach when she came into his room concerned and offering him food that Mr Upton realised he needed help.

"Lying to her, it was like something's not right. Friends would say let's go for a walk and I'd say I had this or that on or wasn't feeling up for it. It took me to hit rock bottom to realise there was an issue," he said.

David Burt, a former teacher, counsellor and sports club pastoral care officer, knows of many young men who have reached crisis point. He has learned about the fate of many while running grief debriefs for teammates at sports clubs.

COVID-19 lockdowns have put critical strain on the mental health of young people, but deep mental health issues for young men raised in the "harden up, hyper-masculine" Australian environment were already taking him into too many groups of devastated people.

"If there was a major tragedy in a club such as a suicide, I would go out and support the community with a clear head and a warm heart to try to put some things in place to care for the family and the community," says Mr Burt, who also ran sports welfare at the Eastern Ranges footy club.

"At every club I went to I saw a common theme: [they] never saw it coming," he said.

After seven deaths by suicide of sports club members in 18 months, Mr Burt left teaching to found the not-for-profit Sport and Life Training (SALT) in 2015 to work on crisis prevention. The group goes to clubs to talk mental health, knowing the signs and reaching out to mates.

If you take the mask off and show people the real you, and you have these raw kind of taboo emotions, they kind of respect you for it.

Mr Burt has seen cases where a mate reaching out to a mate at a sports club has proven lifesaving. On Thursday he was taken by Rhys Upton's powerful story of loss and his message to his teammates at Blackburn South cricket club mates: dare to speak up.

He says sports clubs are the perfect place to support men's mental health by using power of the bonds between them. He points to La Trobe University research that found people are three times more connected to their local club than their school or work.

After hearing Mr Burt speak at Thursday's event – thanks to an anonymous survey of those present he knew a third of people in the room were experiencing mental health issues – Rhys Upton decided to share with the cricket guys.

"I thought, 'These guys, who'd I'd go as far as considering some of them as family, don't know what I've been going through'.

"The guy who I coach with was there and we've been friends since year 8 and played basketball, football and cricket together, we see each other four or five times a week. He found it a bit difficult to hear and I found it a bit difficult to say but it felt pretty good to be able to open up and say, 'I'm generally a pretty happy guy but I've been struggling," Mr Upton said.

He hopes other young men will feel comfortable and know they will not be judged if they reveal mental health issues.

"I think a lot of people like myself don't realise there's an issue until it's either too late or you can't hide it anymore. It's like the mask you wear becomes cracked and worn and bits of the real you start coming through.

"It's almost like if the mask completely breaks off, that many see that as the end. They can't go any further. I feel like if you take the mask off and show people the real you, and you have these raw kind of taboo emotions, they kind of respect you for it."