Chemnitz, Germany: The crowd was hundreds strong and angry, marching through the heart of this eastern German city on a Sunday afternoon and preaching violence against foreigners.

"Racists!" shouted Rola Saleh, a 40-year-old Lebanese refugee who stood in their path, and whose dark skin sets her apart in a city of a quarter-million that is predominantly white. 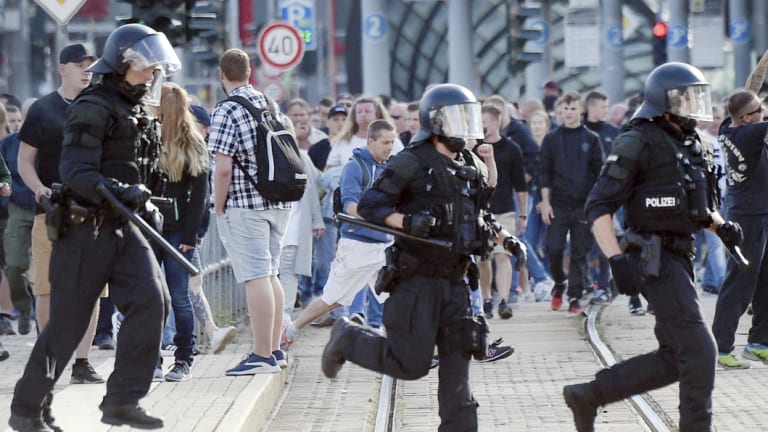 A stiff shove came in reply. And then a warning from the police.

"If the mob attacks," an officer told Saleh in a moment she captured on video, "we can't guarantee your safety."

The gathering storm around Saleh was just the start of a week in which the extreme right – whipped into a fury by the Sunday morning killing of a German national, allegedly during a brawl with immigrants – has repeatedly taken to the streets in Chemnitz.

Its levels of aggression and support – some 6000 people in one demonstration – have unnerved this city and stunned the nation. 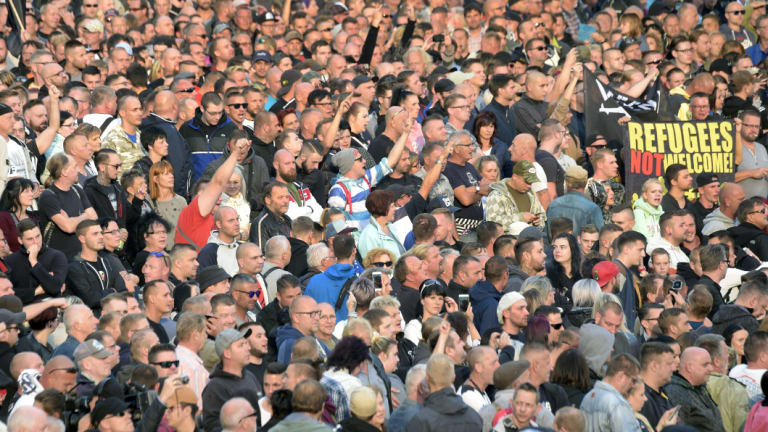 Protesters gather for a far-right protest in Chemnitz, Germany.

The extremists have openly saluted Hitler and chased down immigrants in targeted attacks. Fuelled by Facebook posts spreading what one German official described as "fake news," the crowds have gathered so quickly they have twice left police overmatched. Dozens of people have been injured in duelling demonstrations. Chancellor Angela Merkel has condemned the "mob-like behaviour" that is "at odds with the rule of law in our country."

Far-right groups rallied again on Thursday evening, and they have called for new shows of strength in the coming days.

Extreme-right violence is hardly new in Chemnitz, a once-mighty industrial city that suffered during the transition from communism but has been growing healthily in recent years. The city, and the surrounding state of Saxony, have long been known as hubs for neo-Nazi activity. In last year's national election, the Alternative for Germany (AfD) party, which campaigned on an anti-immigrant platform, was Saxony's top vote-getter. 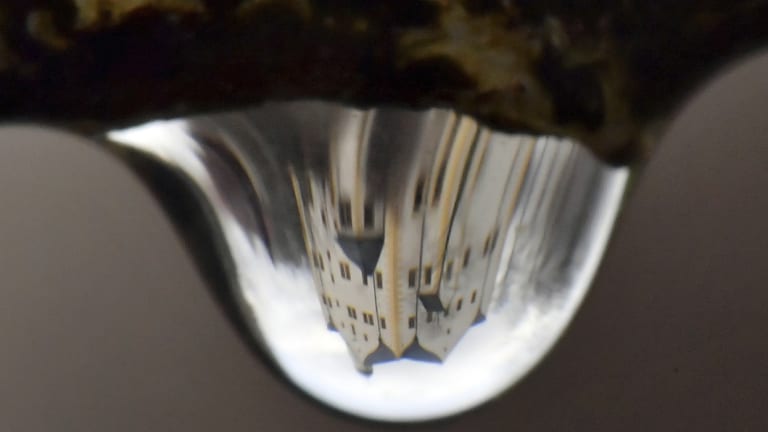 The historic Klaffenbach castle reflected in a rain drop in Chemnitz, Germany.

But the ability of once-disparate extremist groups to work together this week and mobilise such large crowds on such short notice has set off worries that xenophobic messages are finding a more receptive audience in Germany, as the country seeks to integrate more than 1.5 million recently arrived asylum seekers.

The faltering response from authorities has only reinforced those fears.

"When the state is losing control – and this is what the far-right is provoking – then their message becomes reality," said Andreas Zick, who studies extremist groups at Bielefeld University. "They're feeling better than they have in months."

The turmoil in Chemnitz began with a middle-of-the-night fight: A 3 am altercation that left a 35-year-old German citizen dead of stab wounds. A Syrian and an Iraqi – both in their early 20s – have been detained in connection with the killing. 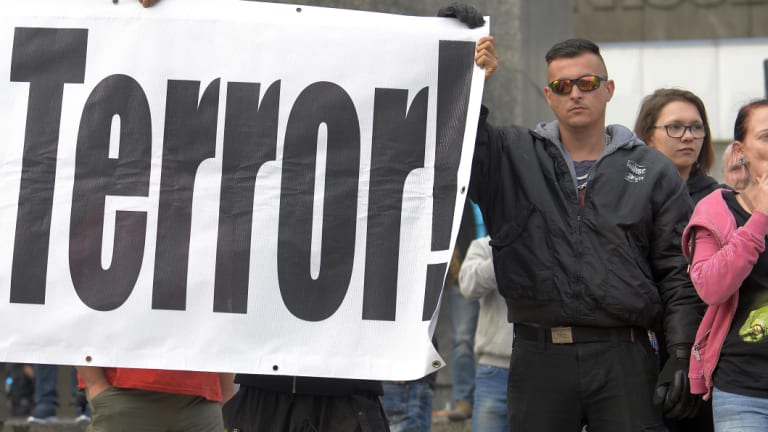 Protesters gather for a far-right protest in front of a Karl Marx monument in Chemnitz, Germany.

Police have released few details and have said nothing about what prompted the confrontation.

The dead man – a carpenter identified as Daniel Hillig – was of Cuban descent. He had adamantly opposed any attempt to demonise foreigners for political gain, according to friends who have spoken to German news media.

Nonetheless, within hours of the killing, far-right Facebook feeds were buzzing with rumours, including that there were two people dead and that the victims had been defending a German woman from harassment by refugees. There were calls for vengeance against immigrants, most prominently from a group of soccer hooligans that has been banned by the local club for its unruly behaviour and extreme politics.

"Let us show together who has the say in the city!" the group, Kaotic Chemnitz, wrote on its Facebook page Sunday, encouraging its supporters to mass in the city's central plaza, beneath an oversize bust of Chemnitz's communist-era eponym, Karl Marx. 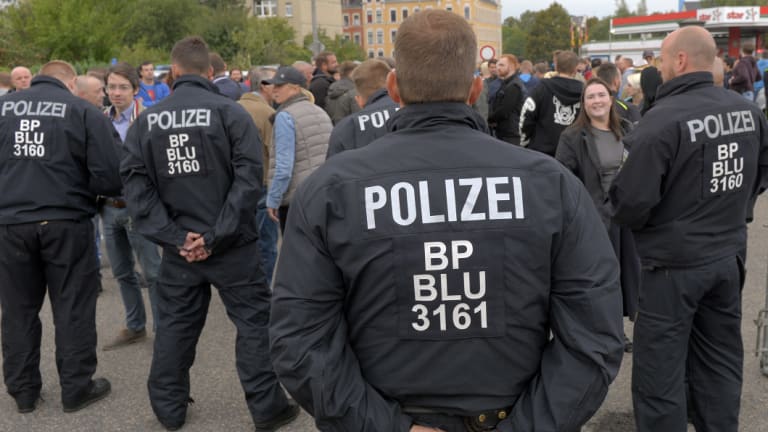 Much of the anger "was based on xenophobic comments, false information and conspiracy theories," Michael Kretschmer, prime minister of Saxony's state government, said later.

About 800 people heeded the call to gather on Sunday, many of them sporting clothing or tattoos associated with the extreme right. "This is our city," they chanted as they made their way to the square.

Saleh, who happened to be nearby as the mob assembled, said she heard some of them yell, "For every dead German, we'll kill a foreigner." 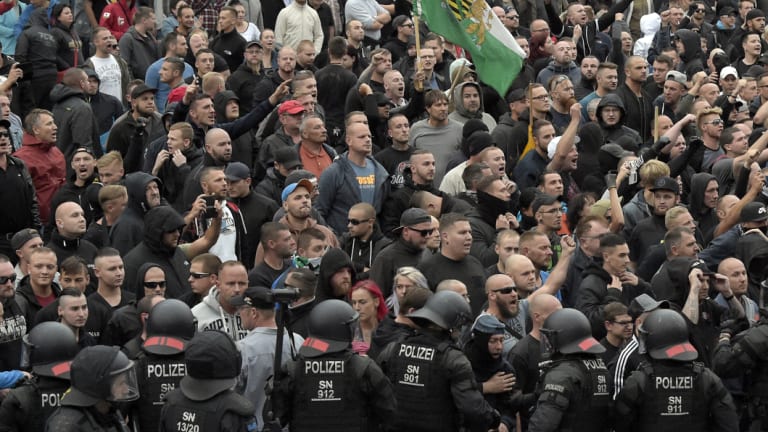 Men shout during a far-right protest in Chemnitz.

She said the spectacle surprised her – but only to a point.

"I was shocked that a mob can walk like this and make people afraid in the middle of Chemnitz in broad daylight," said Saleh, who has lived in the city for 17 years and works for an organisation that offers social and youth programs for immigrants. "But I was not surprised that these racist people exist here."

Rather than run from them, she stood her ground and screamed back.

"This is my city," she said. "I couldn't just watch them do these things."

An even bigger crowd gathered the next day, after a far-right group known as Pro Chemnitz, which holds three seats on the city council, put out the call for a demonstration.

The killing, said group spokesman Benjamin Jahn Zschochke, tapped into residents' deepest anxieties about the city's rising refugee population and what he described as a resulting spike in crime.

"The city was ready for this," he said. "There was no discussion of whether this was the right time. We knew it had to be now."

Chemnitz has a relatively small but growing foreign-born population: around 20,000 people, or 8 per cent of the city. Police say there has been no refugee-driven crime wave.

"It would be wrong to conclude that there's a problem with refugees," said Torsten Scheller, the deputy leader of the Police Union of Saxony. "Of course, with more people in general, there is also more crime. It's proportional."

The crowd of 6000 that turned out hours after Pro Chemnitz issued its call exceeded what police had prepared for, authorities later admitted. Many were locals, but extremists also came from other parts of Saxony and from across Germany.

"A lot of people were just regular citizens," said Volker Dringenberg, a lawyer and local AfD leader who said he attended out of curiosity. "And then there were the people you wouldn't want to drink a beer with."

Police said at least 10 people performed Hitler salutes, a crime in Germany. Twenty people were injured as bottles and fireworks flew between the far-right side and the 1500 counter-demonstrators who assembled in a park across the street.

Police struggled to keep the two sides apart. But they were not the only ones surprised by the scale of the mobilisation or the anger of the participants.

"We didn't think that so many people could turn out or that there could be so much violence," said Robin Rottloff, spokesman for an anti-Nazi group that helped lead the counter-demonstration.

Dringenberg, whose AfD party has kept its distance from this week's demonstrations but is planning to hold its own on Saturday, said the city has been doing reasonably well economically. But "there's a fear of change. People look at places like Berlin or Hamburg where things don't always go smoothly, and they're afraid that will happen here."

The fear runs both ways. Some refugees living in Chemnitz said they had spent Sunday and Monday inside, terrified of being attacked on the street.

Amr Abdel-Hady said he had made friends in Chemnitz since arriving three years ago, and found that the city was much more welcoming than some Germans had made it out to be.

But after this week, the 33-year-old Egyptian said, he's "thinking about what's the quickest way to get out."

Not so with Saleh.

"I have friends in western Germany who say, 'You're crazy. How can you stand it there?" she said. "But I tell them, 'If I leave, who will I be leaving the city to?' I'm staying."