Singapore: Kim Hyun-jeong knew something wasn’t right when she arrived with a group of friends at Itaewon subway station in Seoul about 7pm on Saturday night.

“The inside station was already so packed with people that it took five minutes for us to walk up the 20-metre stairway to exit the station,” the 29-year-old office worker told The Sydney Morning Herald and The Age on Sunday. “Walking up the stairway, I was already feeling dizzy that I text-messaged my friends, ‘I should have not come here’.” 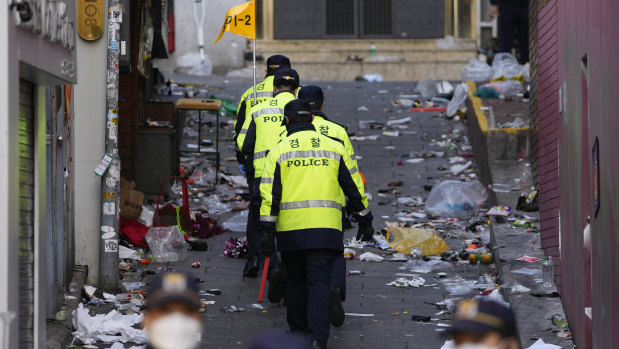 Police officers work on Sunday at the scene of a fatal crowd surge in Seoul. Credit:AP

An estimated 100,000 revellers had massed in Itaewon, a vibrant area of bars and restaurants in the South Korean capital, many in costume to celebrate Halloween and let their hair down after the recent easing of COVID-19 restrictions.

Just a few hours later, however, the festivities took a tragic turn as partygoers collapsed and were trampled on in a crowded alleyway near an exit to the subway station.

In horrific and chaotic scenes captured on mobile phones and posted on social media, bystanders and emergency workers were shown performing CPR on unresponsive people on the footpath and bodies could be seen covered in blue sheets before being taken away on stretchers to hospitals and a gymnasium.

On Sunday, as the narrow street where the crush occurred was taped off by police but remained strewn with rubbish, the toll of South Korea’s worst disaster in years was still being calculated.

Authorities said 151 people, most of them in their 20s and 30s, had been killed and a further 104 were injured. Of them, 24 were in a critical condition, according to Seoul City’s disaster headquarters, indicating the casualty count could well rise.

Ninety-seven of the fatalities were women and the dead included 19 foreigners including nationals of Iran, China, Norway and Uzbekistan, South Korea’s Yonhap News agency reported the national fire agency as saying. Thailand’s embassy in Seoul also said a tourist from Thailand was among the dead.

As victims continued to be identified, there had been 355 people reported missing in Seoul, according to television network YTN, and while frantic relatives searched for loved ones foreign missions, including the Australian embassy, were also among those making urgent enquiries.

“We ask all Australians in Seoul to check in with friends and family to let them know your whereabouts,” Australian ambassador to South Korea Catherine Raper said. 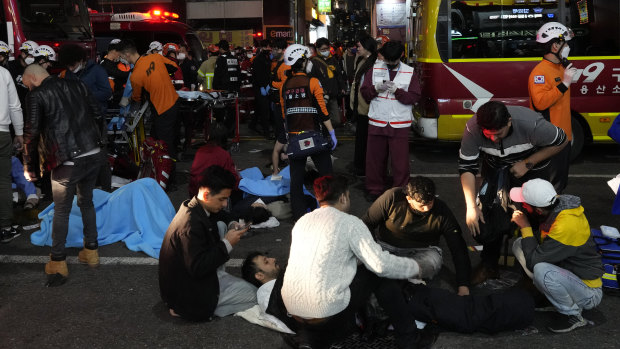 Rescue workers and firefighters try to help injured people near the scene on Saturday night.Credit:AP

South Korea President Yoon Suk-yeol declared a national period of mourning and ordered a thorough investigation as he visited the sloping alley near Itaewon’s Hamilton Hotel, a popular party destination, where dozens had been trapped.

“This is truly tragic,” he said in a televised address. “A tragedy and disaster that should not have happened took place in the heart of Seoul last night.”

There was speculation from some witnesses that the surge in the alley was triggered by news that a celebrity was at the Hamilton Hotel but this was unconfirmed and officials were yet to say whether they had identified a cause for the stampede beyond overcrowding.

Kim, the office worker, said she and her friends had been in a pub-style restaurant adjacent to the Hamilton Hotel, which they had eventually made their way to from the station via the alley, where numbers were bulging by 8pm. 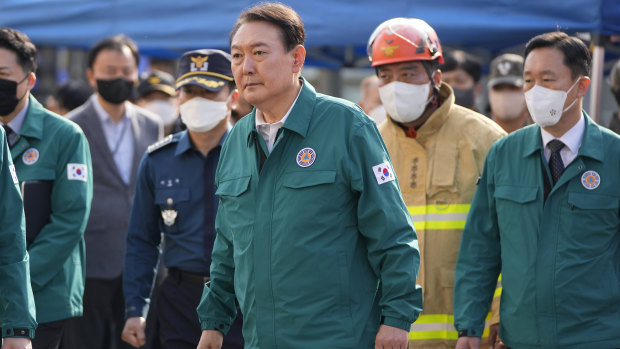 She found relief there from the pressure building in the streets. Then at, 10.15pm, as the music was shut down in the venue and the doors were locked, it became obvious that something very serious had transpired outside.

“Around 11.30pm we finally managed to exit the restaurant through a back door. As soon as we exited, we heard women screaming from here and there and shouts and cries from the crowd, along with ambient club music from various intercoms,” she said.

“We saw police cars, emergency vehicles and other transportations lined up on the streets, civilians applying CPR on men and women lying on the ground unconscious.” 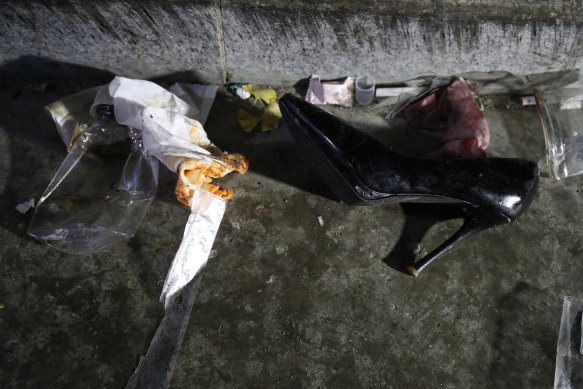 The belongings of victims are seen at the scene of a deadly stampede in Seoul, South Korea.Credit:Getty Images

One survivor told Seoul’s Hankyoreh newspaper that many people had fallen and toppled one another “like dominoes” after they were pushed by others. The survivor, whose surname was also Kim, said they were trapped for about an hour and a half before being rescued, as some people shouted for help and others were short of breath.

Witnesses say Itaewon’s streets were so densely clogged with people and slow-moving vehicles that it was practically impossible for emergency workers and ambulances to reach the alley in time to treat the injured. Vision of the crammed street as panic escalated was published on social media.

Cho Eun-ji, 31, who was in a lounge bar in Itaewon, said she had been there for Halloween parties before the pandemic but the tens of thousands gathered on Saturday night had far outweighed previous turn-outs.

“That may be because young adults, who’d been thirsty for an outdoor party for nearly three years, were so eager to party at Itaewon for Halloween,” she said.

“I really want to stress that this unfortunate stampede wasn’t due to us Koreans’ careless manners and behaviour. An event like this could happen anywhere. [It was] an uncontrollable, inevitable moment that caused the entire chaos.”

While Halloween isn’t a traditional holiday in South Korea, it is still a major attraction for young adults, and costume parties at bars and clubs have become hugely popular in recent years.

World leaders including Prime Minister Anthony Albanese and US President Joe Biden offered their condolences to those affected by the Halloween disaster.

It happened less than a month after football stadium crush in Indonesia in which 135 spectators died while trying to flee police tear gas.