The astonishing truth about iconic Bali bombings TV interview: Survivor reveals his harrowing chat with a Channel Nine reporter about nightclub blast that left him swollen and burned was a ‘complete LIE’: ‘I fabricated everything’

A Bali bombing survivor who gave one of the best known interviews at the time has admitted 20 years on that ‘it was a complete lie, I fabricated everything’.

But Peter Hughes – the victim of one of three terrorist bombs to strike the tourist island on October 12, 2002 – had good reason for making up what happened to him.

Hughes was in deep shock with burns to 50 per cent of his body. He had been given just a 5 per cent chance of surviving – and did not want his family to worry.

Face swollen, Hughes looked unrecognisable as he discussed the attack with Channel Nine correspondent Mark Burrows from his hospital bed.

‘To be completely honest with you it was just a bang, a crash, lots of fire – something out of the ordinary, I suppose.

Hughes said he was being ‘well looked after’ and thanked the medical staff and volunteers.

‘There are a lot worse people than me,’ he said. ‘I just feel a bit swollen at the moment, that’s all. Can’t complain.’ 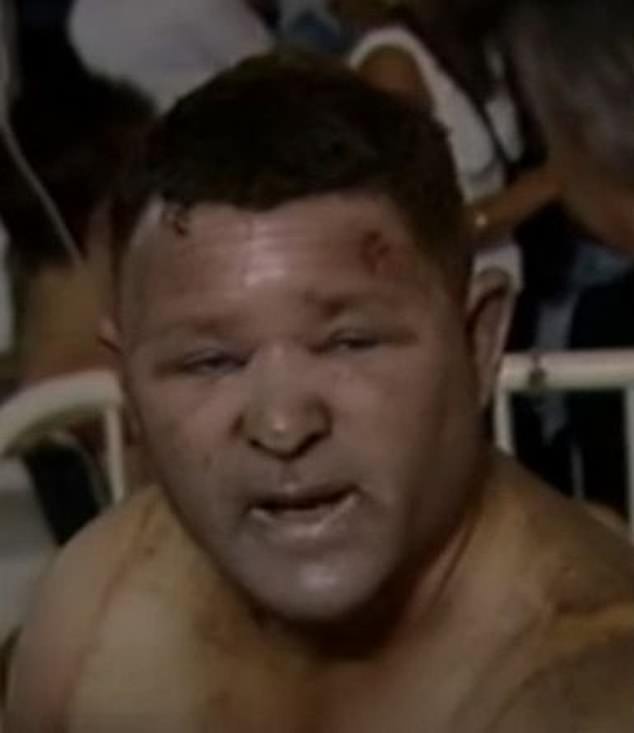 Two decades later it is clear that Mr Hughes was actually very distressed and just wanted to let his loved ones know he was fine.

In reality, he thought he was going to die. He was very seriously injured, was later in a coma and came very close to dying.

Mr Hughes told Channel Nine on Wednesday that the 20th anniversary of the attacks was ‘a little bit overwhelming’ – but that he felt ‘blessed’ to be alive.

Mr Hughes explained that at the time, Burrows was his ‘only conduit back to my son and all my family, my friends’.

But despite his bravado in the interview, he was sure he was going to die.

‘It was just a matter of trying to get the message across and Mark being the person he was, he fronted up and said he’d get a message back to my son and I did the interview.

‘It was a complete lie, I fabricated everything.

‘It was just hope because everything around me was about hope. And I was just there to hang on and I was just wishing everyone else the same thing,’ he said.

How the Bali bombings unfolded

Two of them hit busy nightclubs – the Sari Club and Paddy’s Bar – while another exploded out the front of the American consulate.

Some 202 people were killed, 88 of them Australian, and hundreds of others were wounded.

The attacks were carried out by terrorist organisation Jemaah Islamiyah. 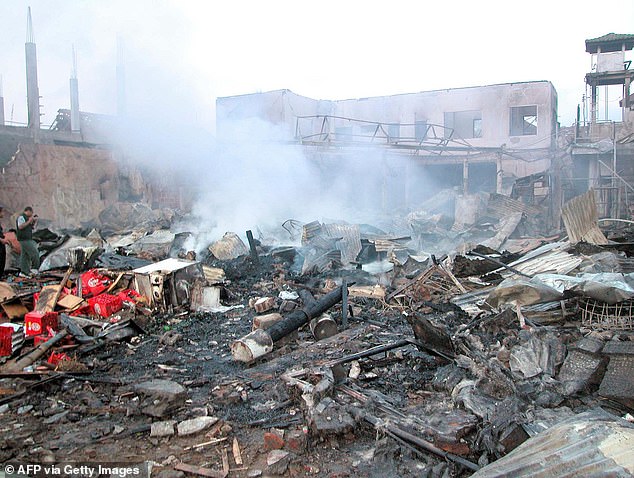 This picture shows smoke still rising from the debris at the site of a bomb blast in the tourist area of Kuta, in Denpasar on the Indonesian resort island of Bali, in October 2002

As he did 20 years ago, he again thanked those whose medical care kept him alive.

‘After the bombings (survivors were) directed out to Darwin and then … to Adelaide and to Perth, I just realised then that (there were) people that put all the work in, the medical staff, the first responders, the amazing doctors from each of those areas …

Mr Hughes said though ‘they couldn’t save everybody, they tried their bloody best and they did what they could’. 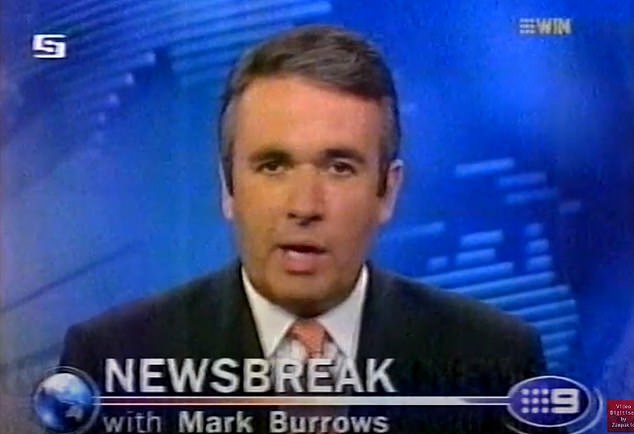 He said he feels ‘extremely humbled’ by the incredible work everyone did to try to save lives, both in Bali and in Australia.

‘Even standing here 20 years on in Bali … it’s just to basically pay my respects to everyone that did a great job.’

Channel Nine’s Allison Langdon recalled that at one point Mr Hughes begged his son to let him go because the pain from his burns was so horrific.

‘It’s the worst infliction of injury on anybody to do. You can’t do that to people. To go through that and just the recovery – I think … a burns patient will stay in hospital longer than anyone,’ he said. 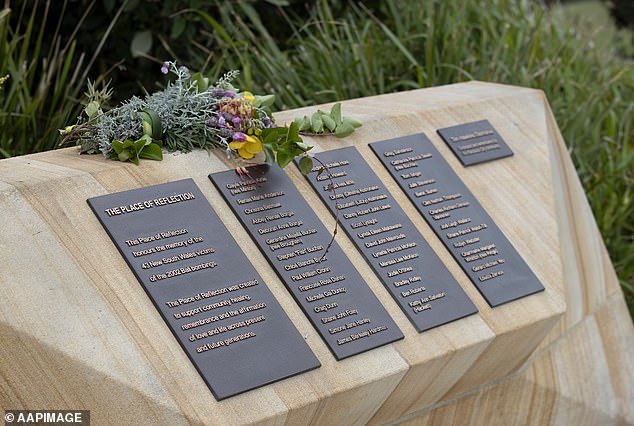 Flowers lay next to the names of the victims at a ceremony marking the 20th anniversary of the 2002 Bali bombings at Coogee Beach in Sydney, Wednesday, October 12, 2022

‘We are just so fortunate to have them because they just do jobs that we couldn’t even think of,’ he said.

‘And to try and bring a person back to normal, back to the same look, is just incredible.’

John Howard – who was prime minister at the time of the Bali bombings in 2002 – and the Foreign Minister Penny Wong were both reduced to tears on Wednesday at a 20th anniversary commemoration of the atrocity.

Of the 202 people who were murdered by terrorist bombs at nightclubs in Kuta on October 12, 2002, 88 were Australian.

Mr Howard, who then led a nation united in grief, was overcome with emotion during a service in Canberra on Wednesday, some two decades on.

At a similar service in Sydney, Prime Minister Anthony Albanese called the Bali bombings an ‘act of malice and calculated depravity’ and said the hurt has not dimmed for Australians. 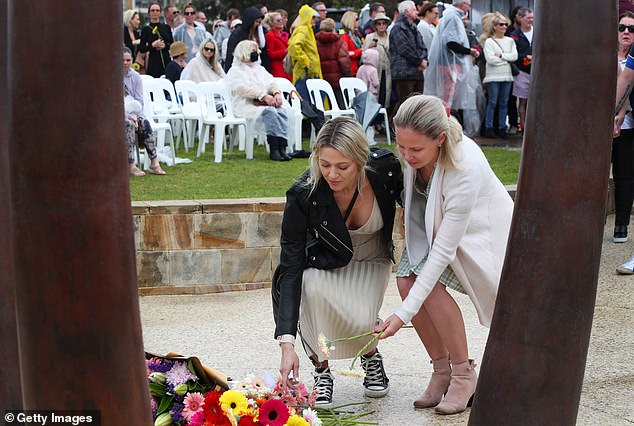 Candice Buchan and her best friend Ashleigh Airlie lay flowers during the Bali Bombing Memorial at Dolphins Point, Coogee Beach on October 12, 2022. Ms Buchan was orphaned in the blast and Ms Airlie’s mother was killed 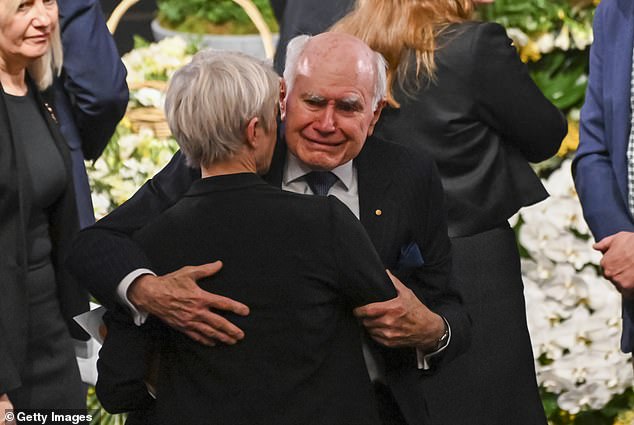 Former Australian prime minister John Howard is overcome with grief as he comforts a woman on October 12, 2022 in Canberra, Australia

Images of death and debris still haunt the memories of families who lost children, parents, aunts, uncles, cousins and friends.

Mr Albanese attended a memorial at eastern Sydney’s Dolphin’s Point, which is named in memory of the six players from the Coogee Dolphins Rugby League Club who died in the blasts.

‘For most of us, what happened on that fateful night is beyond imagining,’ he told the crowd in an emotional speech on Wednesday.

Many people’s futures were stolen, while others would forever carry the scars of the attack, he said.

Among the victims were local workers, alongside many Australians from sporting teams celebrating the end of their season including members of the Kingsley Football Club, Southport Sharks, Dulwich Hill Newtown Basketball Club and Coogee Dolphins.

Candice Buchan and her best friend Ashleigh Airlie left flowers at the scene in Coogee. They were aged 15 and 14 when they and their families were caught up in the bombings.

Candice was orphaned, losing her parents Steve and Gerardine, as well as her aunt Cathy Seelin. She was injured but survived. Ashleigh lost her mother Gayle. 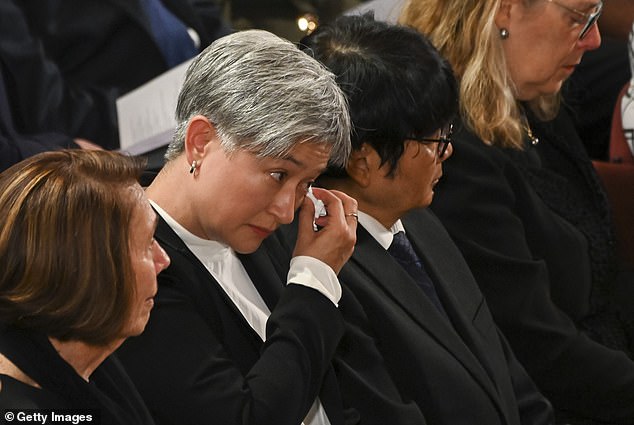 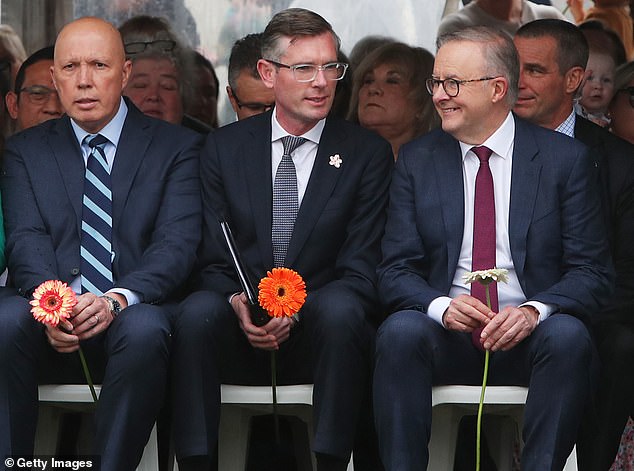 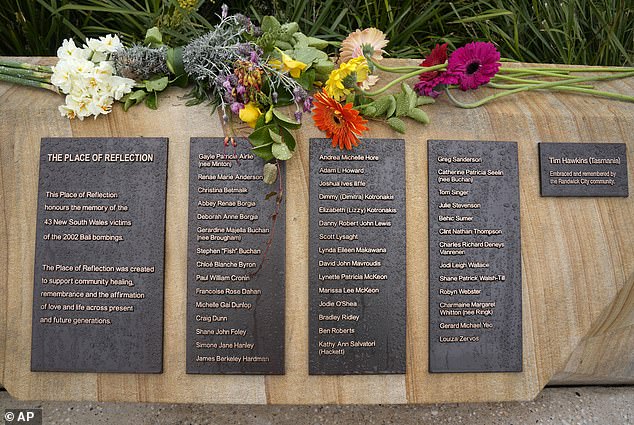 A commemorative plaque with the names of victims is adorned with flowers during a memorial ceremony in Sydney, Australia, Wednesday, October 12, 2022, honoring the victims of the 2002 Bali bombing that killed 202 people, mostly foreign tourists, including 88 Australians 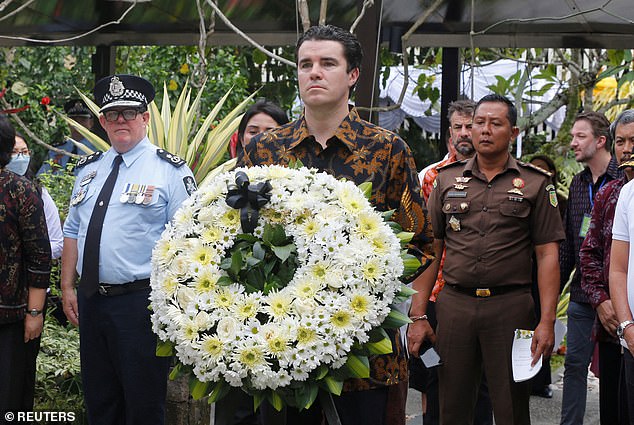 Australian Assistant Minister for Foreign Affairs Tim Watts carries a wreath during the commemoration of the 20th anniversary of the Bali bombing at the Australian Consulate in Denpasar, Bali, Indonesia, October 12, 2022 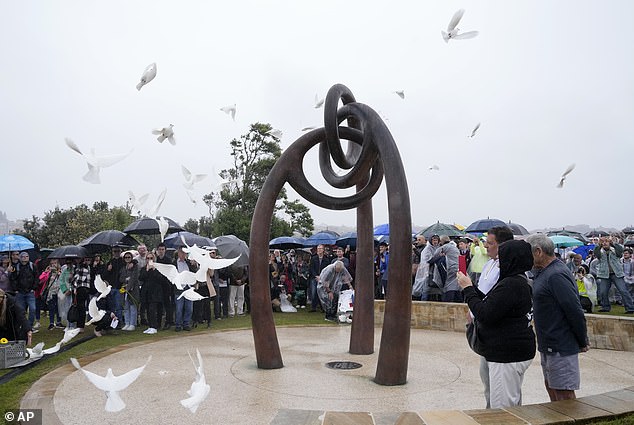 Doves are released during a memorial ceremony in Sydney, Australia, Wednesday, October 12, 2022, honoring the victims of the 2002 Bali bombing that killed 202 people, including 88 Australians

A decade ago, on the 10th anniversary of the bombings, Ms Buchan said: ‘When you see the images they show (on the news), the fire, I just can’t believe that we were there and we’ve seen that.

‘I still don’t think I comprehend it and understand that we survived that, and experienced such a tragedy,’ she told The Australian.

Ms Airlie said: ‘Fortunately my best friend went through the exact same thing as me, so we have each other. It doesn’t get easier, it’s still hard every day. But you have good people around you to help you cope with it.’

Ms Buchan said she didn’t know where she got her strength from.

‘It’s not easy to be an only child and not have a mum and dad,’ she said. 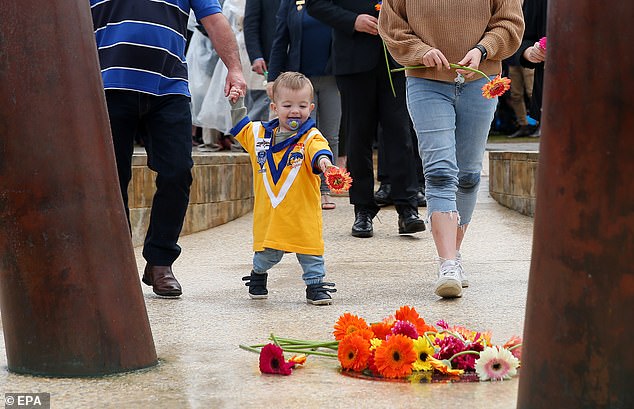 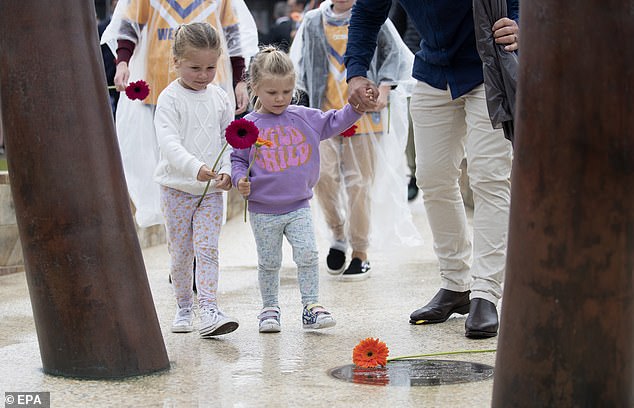 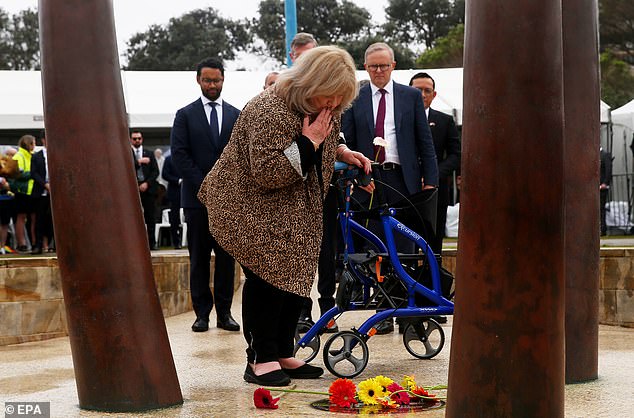 A woman is pictured paying her respects at Coogee Beach in Sydney to the victims of the 2002 Bali bombings. Anthony Albanese is pictured to her right 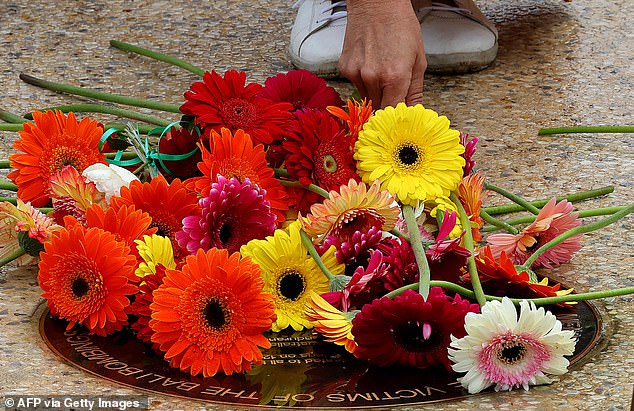 A woman lays a flower at the end of a commemoration ceremony to mark the 20th anniversary of the Bali bombings, at Coogee Beach

‘But they both worked hard and they were strong and obviously there’s nothing I can do, they’re not here, and I just have to work hard and make them proud.’

Mr Albanese said the terrorists failed in their aim because they struck at the very heart of the Australian identity – ‘the great fabric of dreams and ideals and compassion and fairness that make us who we are as Australians’.

‘They struck at the joy of a free people.’

Mr Albanese said that ’20 years on, so many hearts are still tethered to that night’.

‘Many currents of the great river of life were stranded that night. We hold onto their names and faces, we will never forget them,’ he said. 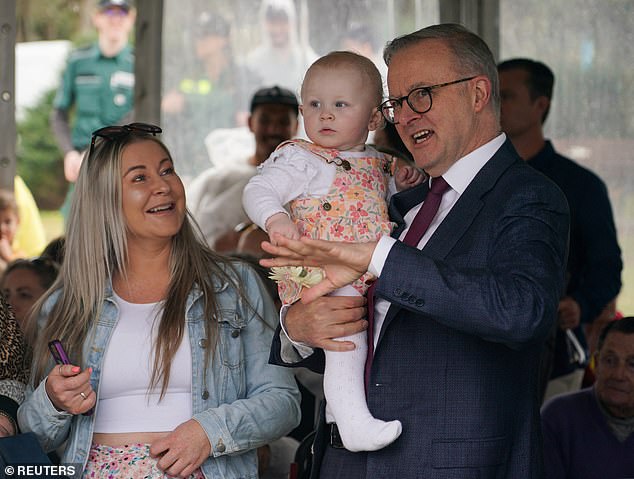 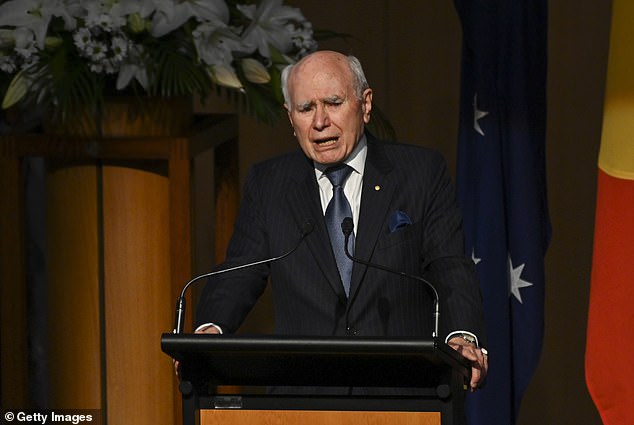 Former prime ministerJohn Howard speaks at a ceremony on October 12, 2022 in Canberra, Australia to mark the 20th anniversary of the Bali bombings 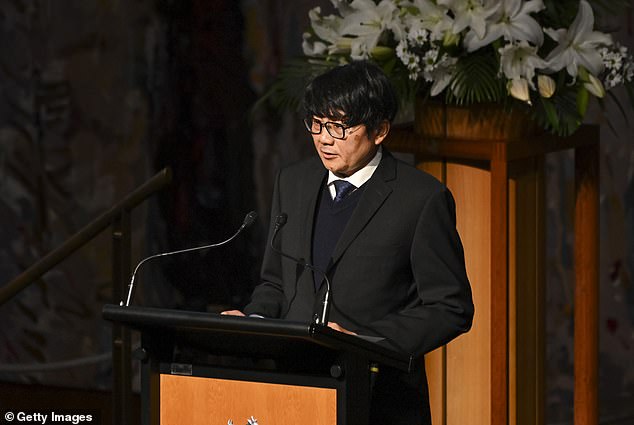 Indonesian Ambassador to Australia Dr Siswo Pramono speaks at the ceremony on October 12, 2022 in Canberra, Australia to mark the anniversary of the Bali bombings in 2002

NSW Premier Dominic Perrottet said the terrorists who targeted the Sari Club failed in their goal to instil fear and create division.

‘In the aftermath of the attack, we witnessed an outpouring of kindness, courage and hope for all Australians,’ he said.

The anniversary would forever belong to the survivors and first responders who helped in the aftermath of the bombing, the Premier said.

‘Although all of us may remember that day – we cannot even begin to imagine what it feels like to you,’ he said addressing survivors and their loved ones. 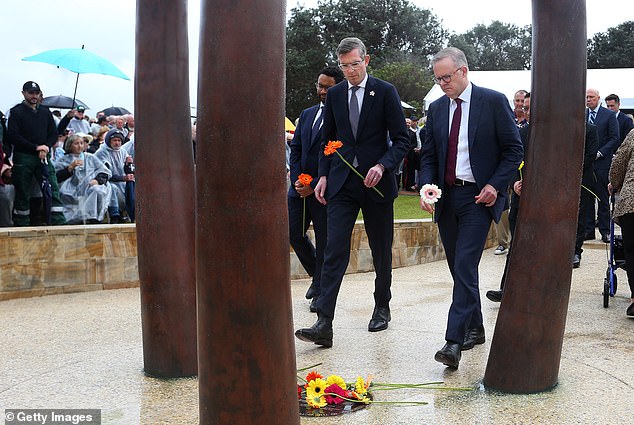 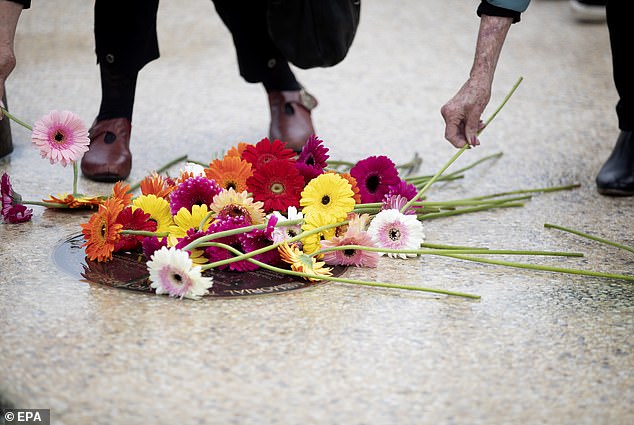 Commemorative services are taking take place across the nation.

A memorial service was held at Parliament House in Canberra and Australian flags flew at half mast across the country.

A twilight service will be conducted at Allambe Memorial Park on the Gold Coast, featuring a bronze plaque listing the names of the 88 lost.

Among them is Robert Thwaites, whose parents initiated the Indonesian-style memorial after he was killed in the bombings.

His father Geoff said the memory was no easier, 20 years on.