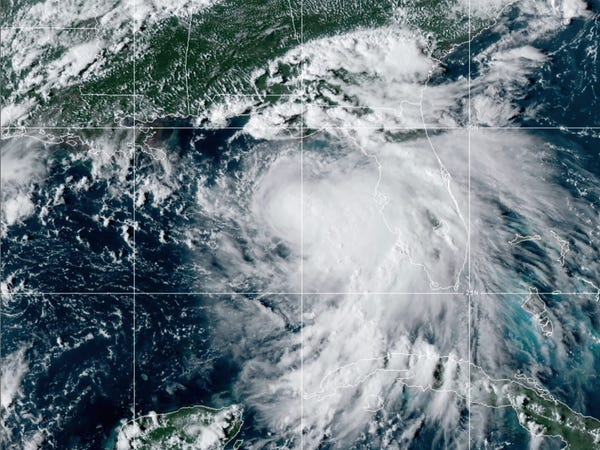 Just weeks after Hurricane Laura struck Louisiana as a Category 4 storm, Gulf Coast states are bracing for yet another hit.

Hurricane Sally intensified from a tropical storm to a Category 2 hurricane between Sunday and Monday afternoon. It's currently 145 miles southeast of Biloxi, Mississippi with wind speeds around 100 miles per hour.

Sally is expected to make landfall between Louisiana and Mississippi as a dangerous hurricane on Tuesday at 7 p.m. local time.

The National Hurricane Center (NHC) warns of "life-threatening storm surge" and flash flooding along portions of the Gulf Coast starting Monday night. A hurricane warning is in effect between Morgan City, Louisiana and Navarre, Florida. Parts of metropolitan New Orleans are also under warning.

"I know for a lot of people this storm seemed to come out of nowhere," Louisiana Gov. John Bel Edwards said Sunday. "We need everybody to pay attention to this storm. Let's take this one seriously."

He added: "Based on all of the available information, we have every reason to believe this storm represents a significant threat."

After the hurricane moves over land, the NHC expects Sally to weaken to a tropical depression by Wednesday evening as it travels north through Alabama and into Georgia.

Forecasters say Hurricane Sally could bring storm surge of up to 11 feet from the mouth of the Mississippi River to Ocean Springs, Mississippi. That, coupled with high tides, "will cause normally dry areas near the coast to be flooded by rising waters moving inland from the shoreline," the NHC said.

Sally isn't moving quickly — the storm is traveling northwest at a speed of 6 mph — and it's expected to slow down even more as it approaches the coast on Tuesday. That gives the storm more time to dump rain, which will likely lead to "life-threatening flash flooding," according to NHC forecasts.

The hurricane is expected to bring up to 2 feet of rain in isolated areas between southeastern Louisiana and the Florida panhandle.

"That system is forecast to bring not only damaging winds but a dangerous storm surge," Daniel Brown, an NHC expert, told the Associated Press on Sunday, adding, "because it's slowing down, it could produce a tremendous amount of rainfall over the coming days."

Nearly 90% of hurricane-related deaths result from rainfall flooding and storm surge, according to Weather.com.

On Monday afternoon, the NHC announced it was tracking five storms in the southern Atlantic Ocean — which ties the record number of storms ever to swirl at one time. (The record was set in 1971, nearly 50 years ago.)

In addition to Hurricane Sally, the NHC is keeping tabs on Hurricane Paulette, which is moving northeast away from Bermuda, as well as Tropical Storms Vicky, Teddy, and Rene.

Tropical Storm Teddy is expected to become a hurricane on Tuesday, the NHC reported.

Climate change overall makes hurricanes more frequent and devastating than they would otherwise be, since storms feed on warm water. Higher water temperatures also lead to sea-level rise, which in turn increases the risk of flooding during high tides and in the event of storm surges. What's more, warmer air holds more atmospheric water vapor, which enables tropical storms to strengthen and unleash more precipitation.

"Our confidence continues to grow that storms have become stronger, and it is linked to climate change, and they will continue to get stronger as the world continues to warm," James Kossin, an atmospheric scientist at NOAA, told the Washington Post last month.