Hurricane Dorian was once a category 5 hurricane and wreaked havoc across the Atlantic Ocean. Throughout this week the system has thrashed the Bahamas, causing storm surges to rise above two stories and widespread destruction in the island nation. The storm has now hit the US coast, where it is expected to bring similar conditions. 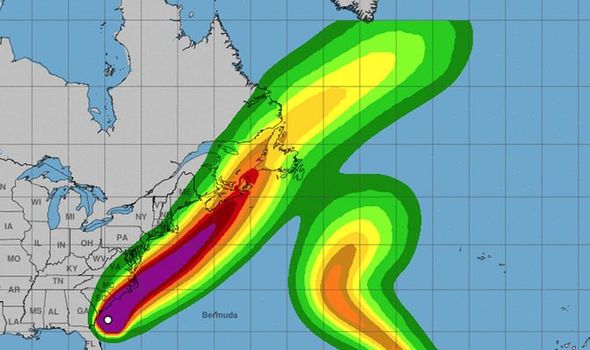 They said: “A Weatherflow site at Shutes Folly in Charleston Harbor recently reported a wind gust of 73 mph (117 km/h).

Gusts of 73mph are just short of a category 1 hurricane on the Saffir-Simpson scale.

Overall, this shows a general weakening in the system, which was a category 5 just days ago.

However, the NOAA has warned the storm could still pack a punch to the US coast.

The NOAA has warned Dorian will bring “life-threatening storm surge, winds, heavy rainfall and tornadoes to portions of the Carolinas”.

Per their latest official public advisory, the NOAA has laid down the following warnings for the US: