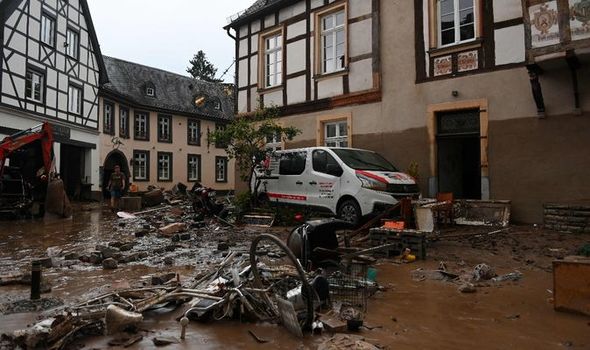 Dozens are missing after the shocking deluge, with others forced to clamber onto their roofs until rescuers could reach them. Thousands have been left homeless by the lethal downpour, which ripped buildings apart and caused rivers to burst their banks.

Roads were transformed into fast-flowing torrents which swept away cars and trucks, before piling them up on top of each other.

Among the fatalities were two firefighters who had been trying to save residents trapped in flooded cellars.

Helicopters airlifted victims to safety and soldiers used tanks to clear away mounds of debris.

Local authorities in Germany have confirmed at least 93 fatalities, with 12 deaths recorded in Belgium so far.

German Chancellor Angela Merkel said: “I am shocked by the catastrophe that so many people in the flood areas have to endure. My sympathy goes out to the families of the dead and missing.”

Police in Ahrweiler, in Rhineland-Palatinate, south of Bonn, said 18 people were dead and many more missing after the River Ahr flooded. State premier Malu Dreyer said: “It’s a catastrophe. There are dead people, there are missing people, and many who are still in danger.

“All of our emergency services are in action round the clock and risking their own lives. We have never seen a catastrophe like this.”

In neighbouring Schuld, the floodwaters had receded yesterday to reveal houses reduced to piles of debris.

Eight people died in nearby Euskirchen and 30 others were killed elsewhere in North Rhine-Westphalia state.

Three people died in Cologne and Solingen after sections of the River Rhine were swelled by rainfall. About 470 people had to be evacuated from a hospital in Leverkusen after the Dhunn breached its banks.

In Belgium, two men were killed and a 15-year-old girl is missing after being swept away by a swollen river.

In the Netherlands, the rising waters led to houses being damaged and a number of care homes being evacuated in the province of Limburg.

Experts said the heavy rain was caused by a belt of low pressure. German politician Armin Laschet blamed the weather patterns on global warming. He said: “We will be faced with such events over and over, and that means we need to speed up climate protection measures.”