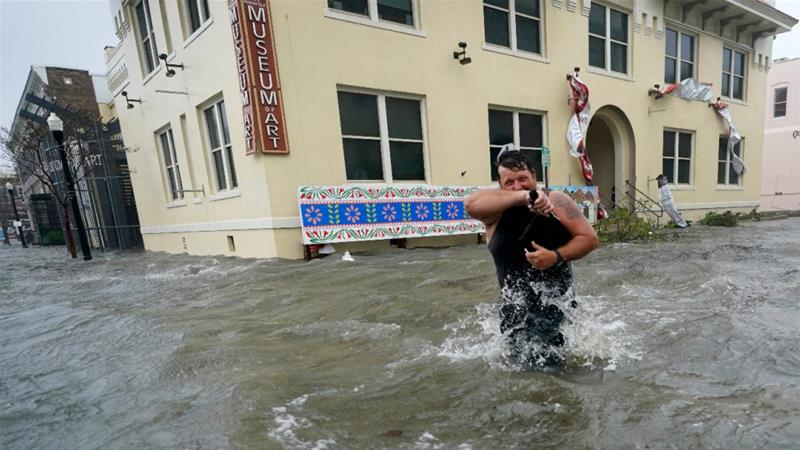 Hurricane Sally uprooted trees, flooded streets and cut power to hundreds of thousands of homes and businesses on Wednesday as it brought what the United States’ National Hurricane Center (NHC) called “historic and catastrophic” flooding to the Alabama-Florida coast.

Sally, which made landfall early Wednesday near Gulf Shores, Alabama as a Category 2 storm, was downgraded in the afternoon to a tropical storm as maximum sustained winds dropped to 113km/h (70mph).

Some parts of the Gulf Coast had been inundated with more than 46cm (18 inches) of rain over the previous 24 hours, with more precipitation expected as the storm’s winds slow further, the NHC said.

Several residents along the Alabama and Florida coasts said damage from the slow-moving storm caught them off guard.

“Normally it goes away. But with this one it was first the anxiety of it coming and then when it finally came, it didn’t move,” said Preity Patel, 41, who has resided in a downtown Pensacola apartment for two years. “It was just constant rain and wind,” Patel said.

The coastal community of Pensacola, Florida, suffered up to 1.5m (five feet) of flooding, and travel was cut by damaged roads and bridges. More than 500,000 homes and businesses across the area were without power as the storm knocked over stately oak trees and tore power lines from poles.

A section of the Pensacola Bay Bridge, known also as the “Three Mile Bridge”, is missing a “significant section,” Florida Governor Ron DeSantis said at a press conference. 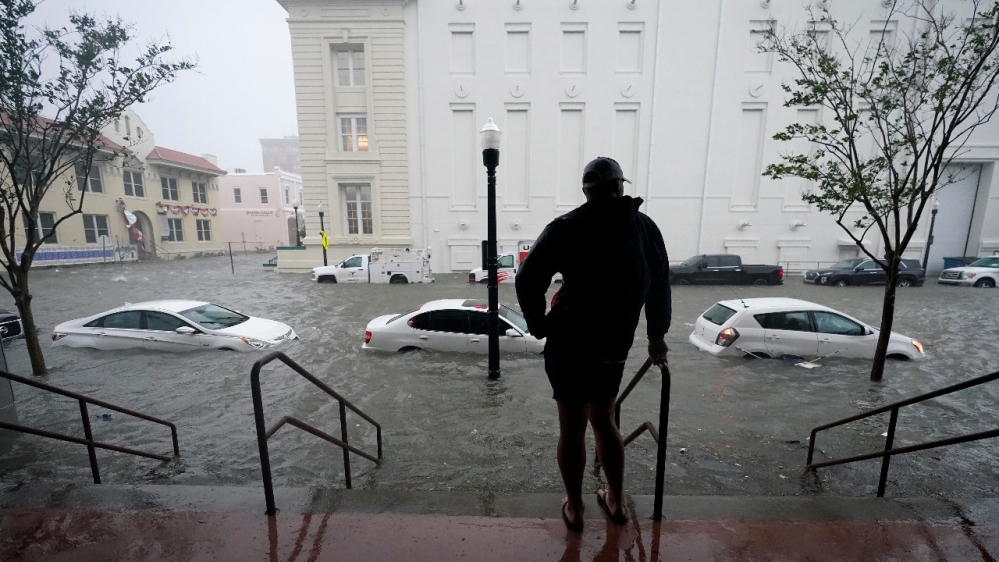 The storm was moving at a slow 8km/h (5mph) pace towards the Alabama-Florida border, but was predicted to pick up speed, the NHC said.

“The rain is what stands out with this one: It’s unreal,” said Cavin Hollyhand, 50, who left his home on a barrier island and took shelter in Mobile, Alabama, where he viewed the damage on Wednesday. Some isolated areas could see up to 89cm (35 inches) of rain before Sally is done, the NHC said.

Upon landfall at Gulf Shores, Sally’s winds were clocked at 169km/h (105mph). Along the coast, piers were ripped away by the storm surge and winds.

Alabama Governor Kay Ivey told residents not to go outside to check on damage unless necessary, and to stay away from live power lines and fallen trees.

“We had strong winds for a long period of time,” said 38-year-old Grant Saltz as he took a break from clearing debris outside his Mobile restaurant. “Instead of a few hours, we got it for 12 hours.”

In Pensacola, where wind gusts were clocked at 124km/h (77mph) at one point, images on social media showed major floods. One witness reported hailstorms in the city as well and the NHC warned of possible tornados.

Pensacola police warned of high winds and urged residents not to drive around looking at damage.

“We see lots of ‘lookers’ out,” the police department wrote on Twitter. “It’s slowing our progress down. Please stay at home!”

Electrical crews from other states have arrived in Pensacola to aid in restoration efforts.

“This year we’ve just got hurricane after hurricane,” said Matt Lane, 23, a member of a crew from New Hampshire Electric Coop, who arrived late Tuesday directly from Hurricane Laura recovery efforts in Texas.

“We’ve only got one name left,” said Jim Foerster, chief meteorologist at DTN, an energy, agriculture and weather data provider, referencing the procedure to name storms and the prospect of running out of letters.

“That’s going to happen here soon, Wilfred, and then we’ll be into the Greek alphabet.”

Hurricanes have increased in their intensity and destructiveness since the 1980s as the climate has warmed, according to researchers at the US National Oceanic and Atmospheric Administration. Climate change is also a factor in the increasing frequency of record-breaking wildfires plaguing the western US, scientists say.

Damage from Sally is expected to reach $2bn to $3bn, said Chuck Watson of Enki Research, which tracks tropical storms and models the cost of their damage. That estimate could rise if the heaviest rainfall happens over land, Watson said.

As the storm moved east and inland, ports on the western Gulf Coast were reopened to travel and energy companies were beginning to return crews to offshore oil platforms.