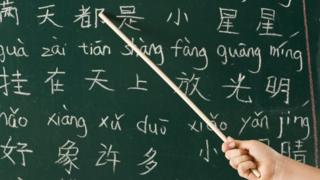 Learning a new language can be tricky, but how many words do you need to know before you can actually get by in a foreign tongue?

That was the question posed to BBC Radio 4’s More or Less programme by one frustrated listener. Despite learning German for three years, and practising nearly every day, they still couldn’t seem to retain more than 500 words.

“I was hoping,” they wrote, “you could give me a shortcut, by working out how many words we actually use on a regular basis.”

To work out how many words you need to know to be able to speak a second language we decided to look into how many words we know in our first language, in our case English.

We considered dusting off the dictionary and going from A1 to Zyzzyva, however, there are an estimated 171,146 words currently in use in the English language, according to the Oxford English Dictionary, not to mention 47,156 obsolete words.

To quote a well-known internet meme “ain’t nobody got time for that”. What we needed was a mathematical cheat. Fortunately for us somebody beat us to it.

Linguists Paul Nation and John Read (who doesn’t love a bit of nominative determinism?), along with their colleague Robin Goulden, came up with a test involving only 50 words.

Their theory is that if you count up how many of the 50 words you understand and multiply the total by 500 you are able to estimate your total English vocabulary.

Words start off simply enough; dog, editor, immense but they quickly become more obscure, for example would you know how to use “oleaginous” or “cowsucker” in a sentence? (Hint: the latter doesn’t have anything to do with cows…. or sucking).

So how many words do we know?

Stuart Webb, professor of applied linguistics at the University of Western Ontario, has studied the process of learning vocabulary or – to give it its sexier name – language acquisition.

He discovered that it is incredibly difficult for a language learner to ever know as many words as a native speaker.

Word family/lemma is a root word and all its inflections, for example: run, running, ran; blue, bluer, bluest, blueish, etc.

So does someone who can hold a decent conversation in a second language know 15,000 to 20,000 words? Is this a realistic goal for our listener to aim for? Unlikely.

Prof Webb found that people who have been studying languages in a traditional setting – say French in Britain or English in Japan – often struggle to learn more than 2,000 to 3,000 words, even after years of study.

In fact, a study in Taiwan showed that after nine years of learning a foreign language half of the students failed to learn the most frequently-used 1,000 words.

And that is the key, the frequency with which the words you learn appear in day-to-day use in the language you’re learning.

You don’t need to know all of the words in a language: for example it seems unlikely that anyone reading this has suffered from not knowing that “Zyzzyva” is a kind of tropical weevil and not a Spice Girls lyric.

So which words should we learn? Prof Webb says the most effective way to be able to speak a language quickly is to pick the 800 to 1,000 lemmas which appear most frequently in a language, and learn those.

If you learn only 800 of the most frequently-used lemmas in English, you’ll be able to understand 75% of the language as it is spoken in normal life.

These 800 lemmas are a lot more valuable than other words, simply because they’re used far more often. For example it’s much more useful to know the word “house” than the word “abode,” and you’ll get fewer odd looks if you say “perhaps” rather than “peradventure”.

So is there light at the end of the tunnel for our frustrated German student? Well it depends why he wants to learn the language.

Eight hundred lemmas will help you speak a language in a day-to-day setting, but to understand dialogue in film or TV you’ll need to know the 3,000 most common lemmas.

And if you want to get your head around the written word – so novels, newspapers, excellently-written BBC articles – you need to learn 8,000 to 9,000 lemmas.

If you want to find out what it would be like to restrict your native tongue to the most common 1,000 words, Theo Sanderson has created a site where you can test your linguistic skills or lack thereof.

Good luck, or as the Italians would enigmatically say “in bocca al lupo!”

You can listen to the latest edition of More or Less, and others from the series, online and via the programme podcast.