It was time. Tarek El Moussa and Christina Haack were ready for a change before ending their HGTV series Flip or Flop.

Read articleTV Shows Renewed and Canceled for the 2022-2023 Season

“They mutually agreed they didn’t want to go forth with another season,” a source exclusively tells Us Weekly, noting that their contract was up on the show after 10 seasons. “They’re both very busy working on their own projects and have a lot going on in their personal lives.”

The timing “couldn’t be better for the both of them,” the insider says, adding that making it to season 10 was a “really big milestone” for the former couple.

El Moussa, 40, and Haack, 38, made their HGTV debut with the home remodeling series in April 2013 when they were still married. They announced their separation in 2016, finalizing their divorce two years later. 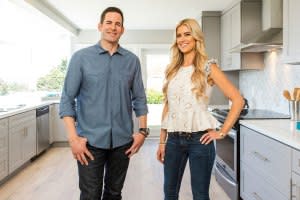 The exes — who share daughter Taylor, 11, and son Brayden, 6 — have since continued their professional relationship, but confirmed earlier this month that season 10 would be their last as a reality TV duo.

“Filming Flip or Flop took up a lot of time,” the source tells Us, revealing that the former spouses “weren’t the happiest on set together.”

As the years went on, El Moussa and Haack would have “disagreements” amid filming, according to the insider. (El Moussa made headlines in July 2021 after reports surfaced that he called his ex a “washed-up loser” during a verbal tiff on set. He addressed the incident in September of that year, telling Entertainment Tonight, “Some choice words were said on both sides,” adding that he was “sure” they both “wish the whole thing never happened.”)

“Once the cameras went away you noticed a different vibe. They just went their separate ways, did their own thing, and would speak to the cast and crew more than they would each other,” the source adds.

Their decision to focus on their solo projects with the network — El Moussa is the star of Flipping 101 and Haack helms Christina on the Coast — has been a welcomed change.

“It’s a relief for the both of them that they don’t have to work together on set again,” the insider tells Us. “Now they can focus more on their spinoffs while still giving the fans what they want.”

Despite butting heads on their joint series, the duo have remained “amicable when it comes to their kids,” the source says.

“They want their kids to be happy and want to show their kids they can make it work as coparents,” the insider explains, adding that outside of working on Flip or Flop and coparenting their kids they are “not involved in each other’s lives.”

Haack previously announced the “bittersweet” conclusion of the TV show via Instagram on Thursday, March 10.

“Next week’s episode of Flip or Flop will be the SERIES finale. I’m filled with gratitude to have done 10 seasons of a hit show,” she wrote at the time. “I remember filming the pilot and thinking, ‘wouldn’t this be crazy if is this actually made it to network tv?’ And here we are, a decade later. … It’s been a wild ride to say the least!!”

El Moussa — who married Heather Rae Young in October 2021 after two years of dating — shared his own social media message to the fans on Thursday and thanked them for their continued support.

“You guys have been with us through it all — you watched me beat cancer, you’ve watched the babies grow up into the most amazing little humans, and everything in between,” he wrote via Instagram. “But I’m not going anywhere and I can promise that you are going to love what comes next!”

Following her split from El Moussa, Haack married Ant Anstead in December 2018. The pair welcomed their son, Hudson, in September 2019, but called it quits one year later.

The Wellness Remodel author moved on with Joshua Hall and announced in September 2021 that they were engaged.

The series finale of Flip or Flop airs on HGTV Thursday, March 17 at 8 p.m. ET.