The warning to Scott Morrison about a crisis in virus testing was made very clear last year after the Prime Minister told Australians to prepare for a world where they would emerge from lockdowns and live with the coronavirus.

The warning was so loud it was almost impossible to ignore. Almost. Now, only a few months later, voters can see the way Morrison has lost the race to bring in huge supplies of rapid antigen tests when people needed them most. 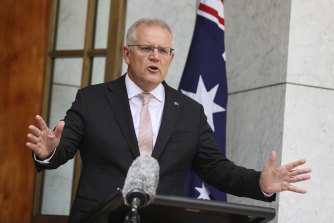 The government’s twin talents, arrogance and complacency, have been at work again in an astonishing repeat of the slow supply of vaccines last year.

Yet Morrison is not the only one who bears responsibility for the RAT shortage. There was nothing to stop premiers and chief ministers ordering more kits sooner to ease the load on state and territory testing centres.

Employers said last August they needed political leaders to release cheap and easy tests to millions of workers in the same way Britain had done for months, usually free of charge, with an online system to register the results.

“Our Olympic athletes successfully used rapid antigen testing in Tokyo, so why can’t we use the same tests here right now and make them available to all?” Ai Group chief Innes Willox said. 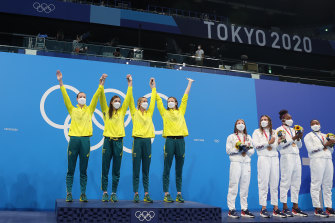 This was not a complaint to Morrison from critics trying to find fault. It was a practical question, not an ideological one. Tony Shepherd, the company director who led the government’s 2014 commission of audit, was urging federal ministers to move fast. Liberal backbenchers, such as paediatrician Katie Allen in the Melbourne seat of Higgins, went public about the need to deploy the rapid tests. Allen had been arguing for more RAT kits since at least June.

This makes the slow response all the more surprising. Politicians hate good advice from their rivals, but the Morrison government was getting good advice from its friends. Its response was that health officials had it all under control. It now turns out they did not.

While Britain and others embraced rapid antigen tests, the Therapeutic Goods Administration was very cautious in Australia. It approved more than a dozen different brands for sale from November 1, but this was months after employers had asked for them and more than a year after Britain cleared its first kits. This might have made sense in the Delta outbreak but was poor planning for future variants – as things turned out when early results showed Omicron was less severe but more transmissible. 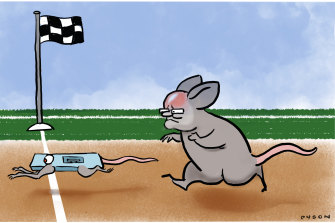 Asked in August about rapid antigen tests, chief medical officer Paul Kelly said they should only be used under the supervision of a health professional. The message from Canberra was that it did not want millions of people using RATs to find out for themselves whether they had the virus. Would the government change that approach? “We’re certainly looking at that as a component of our next steps,” Kelly said on August 6. But those steps took forever.

Today, of course, Morrison wants Australians to use RATs at home to keep track of infections, limit the spread and keep people at work whenever possible. He has finally embraced what he was asked to do five months earlier.

As an aside, the testing nightmare should lead to a more thoughtful debate about health advice. The partisan arguments over the pandemic often include calls to respect the health advice and ignore economists or reject calls from business. On testing, the employers were right and the health chiefs were too slow. This week’s decisions prove this point.

It is important to note that the rapid tests are not as precise as PCR tests. Even so, a series of daily RAT results can increase that reliability. That means volume helps. And that is where governments failed. 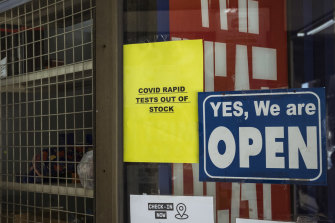 One concern among federal ministers last year was that making RAT kits free would lead to unchecked demand and uncapped costs. In one estimate, matching the British approach could cost $200 million every week. But the government did not have to make them free to make them more widely available. It could have ordered more, and perhaps subsidised them, to prepare for the next wave – just as it has done with other medical items.

Some state leaders were so confident about their PCR testing centres that they played down the need for RATs as well. Asked in July if he saw a place for rapid kits in major events and aged care, Victorian Premier Daniel Andrews worried about “false positives” and said PCR remained the gold standard.

With state test centres overwhelmed, the mess is not all Morrison’s problem. It was up to the states to plan for their share of the load. Only now, reacting too late to immense pressure, have NSW and Victoria set up online systems to register RAT results – the very systems Britain has been running for months. There really is no excuse for that failure to prepare Australia for what was happening overseas.

Morrison admitted on Monday that Omicron had spread faster than he and his officials expected. Did they not think to prepare for a bigger wave of cases? While the Prime Minister has argued that testing is a job for the states, his excuse will not wash with voters. They expect the national leader to lead. 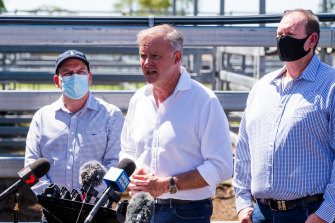 The test kit shortage has turned into a national emergency by leaving millions of workers in the dark about whether they have the virus at the very time the rules require them to use the rapid kits to find out if they should go to work.

Most Australians have played by the rules throughout this pandemic and made everyday sacrifices to observe lockdowns and border controls, but now they are being asked to do the impossible: test themselves with kits they cannot find.

This is fertile ground for Labor leader Anthony Albanese, given his call, which is uncosted but popular, to make the tests free. While the federal government has placed urgent orders for 70 million tests this month and next, those kits will come too late for some. The result is a bizarre disconnect between Morrison’s assurances at his press conferences – “we have to push through” – and the lived experience of people staring at empty shelves in pharmacies and supermarkets.

“They have ample rapid antigen tests to meet their need,” Morrison said of the big retailers on Monday. For their staff, perhaps, but not their customers.

Morrison paid a political price last year for telling Australians the vaccine rollout was not a race. Now he discovers he is in another race. And he is losing this one, too.