Washington: Since leaving the White House on January 20, Donald Trump has been remarkably quiet. Stripped of his Twitter account and told by advisers to lay low during his Senate impeachment trial, the normally garrulous former president has barely been seen or heard.

That changed this week when Trump released his most extensive public comments since leaving the White House: a savage attack on Republican Senate Leader Mitch McConnell. As well as a feud between two very different men, the battle between these former allies is emblematic of a war for the soul of the Republican Party.

Who is Mitch McConnell?

The 78-year-old senator from Kentucky is the most senior Republican in the US Congress. Since 2007 McConnell has been the Republicans’ Senate leader, giving him enormous power over what becomes law in America and what does not. McConnell has gleefully described himself as the “grim reaper” – reflecting the fact the Senate became the place where progressive legislation went to die under his leadership. 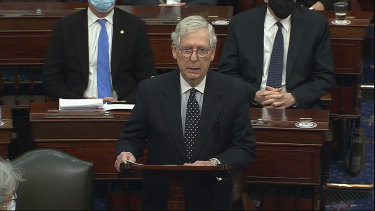 Republican Senate Minority Leader Mitch McConnell said there was no question Donald Trump was responsible for the January 6 assault on the Capitol. Credit:AP

McConnell has played a pivotal role in preventing the Senate from taking action on issues such as gun control and climate change. He also famously blocked it from holding confirmation hearings for Barack Obama’s Supreme Court nominee Merrick Garland in 2016. That decision helped Trump win the election and tilted the balance of the nation’s most powerful court towards conservatives. 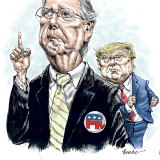 “In the real world no one knows who Mitch McConnell is but he makes Democratic Party activists want to set their hair on fire,” Democratic strategist Scott Ferson previously told the Sydney Morning Herald and The Age.

“In terms of tactical manoeuvring in the Senate he is one of the best we have ever seen.”

When Trump became the Republican Party’s 2016 nominee, McConnell gave him only a tepid endorsement. Then, during the election campaign, he criticised Trump when he called a Hispanic judge biased, when he disparaged a Muslim military family and when a tape emerged of him bragging about groping women.

Trump and his allies, meanwhile, looked upon McConnell as a creature of the “Washington swamp”, beholden to the party’s wealthy donors. But after Trump’s victory, the pair formed an effective transactional relationship. McConnell rarely spoke out against Trump during his presidency and, in exchange, was able to appoint hundreds of conservatives to the judiciary and pass a massive program of tax cuts.

What happened this week?

Last Sunday McConnell joined most of his Republican colleagues in voting to acquit Trump of inciting the January 6 riot at the Capitol. But in a scathing speech immediately after the vote, he heaped scorn on Trump for his behaviour in the aftermath of his election defeat.

“There is no question, none, that President Trump is practically and morally responsible for provoking the events of the day,” McConnell said.

“A mob was assaulting the Capitol in his name. These criminals were carrying his banners, hanging his flags and screaming their loyalty to him.” 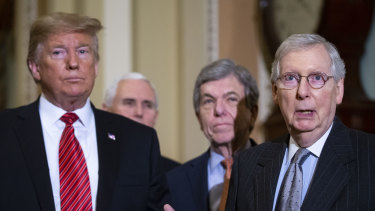 Thorn in his side: McConnell with US President Donald Trump in 2019. Credit:Bloomberg

Why is this important?

The stoush between McConnell and Trump reflects a broader battle playing out inside the Republican Party following Trump’s November defeat and the loss of the party’s Senate majority.

McConnell and his establishment allies want to see the party abandon Trump and his divisive style of politics. They are angling for the party to return to a more traditional style of conservatism that can appeal to suburban and college-educated voters.

Liz Cheney, the third-most senior Republican in the House of Representatives, recently told Fox News that Trump “does not have a role as a leader of our party going forward” and that “we should not be embracing the former president”.

Trump, on the other hand, wants to remain as the kingmaker in Republican politics. In his statement attacking McConnell, he said: “Where necessary and appropriate, I will back primary rivals who espouse Making America Great Again and our policy of America First.”

His daughter-in-law Lara Trump is considering running for the Senate in North Carolina in 2022, setting up what may be just one of many future contests between the Trump and McConnell wings of the party. Republican Senator Lindsey Graham is among those firmly on Trump’s side, saying this week: “We don’t have a snowball’s chance in hell of taking back the majority without Donald Trump.”

As influential as McConnell is within the party, so far the conservative base is sticking with Trump.

Although McConnell may be keen to put Trump in the rear-view mirror, the former president is likely to remain an irritant to him for some time yet.

What in the World

A note direct from our foreign correspondents about what’s making headlines around the world. Sign up for our weekly newsletter here.