London: It is the linguistic equivalent of the epic siege of Troy: how to say “Omicron”, the new coronavirus variant.

Classicists say it should be “oh-MY-cron”, the closest to how the ancient Greeks would have said it.

But the BBC disagrees, as does the World Health Organisation – which is responsible for naming variants – and most of modern Greece. 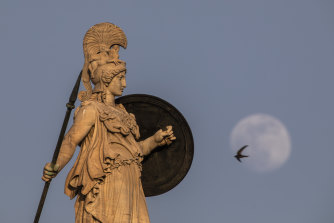 The flower moon rises behind the statue of the ancient Greek goddess of wisdom, Athena, atop the Academy of Athens building.Credit:AP

They instead think it should be “OH-me-cron”, with the emphasis on the first syllable.

Dr Armand D’Angour, an Oxford professor of classical languages, clears things up: “In ancient Greece, they would have said oh-mee-kron.

In English, that became a long i, so that’s why we see microscope and micron, and ‘oh-my-kron’.

But in modern Greek they have dropped that central i or ee, and so it makes sense to me to say oh-me-cron, as the modern Greeks do.”

Others agreed, including Aris Katzourakis, an Oxford professor who is not only a leading voice on the evolution of Sars-CoV-2 but a London-born Greek speaker, thanks to his Greek parents.

He says the pronunciation question is far easier to answer than the others he faces about Omicron, from how transmissible it is to how dangerous. All of that needs more work to establish, he said.

Before being named Omicron the new COVID-19 variant was known as B.1.1.529 or the easier-to-say “nu” variant.