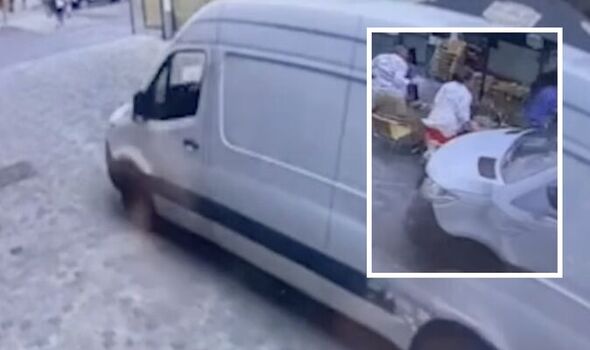 Six people have been injured in the incident which the driver then fled in his van. The vehicle was found abandoned a short distance away. Brussels mayor Philippe Close said it was too early to determine why the driver had smashed into the crowded restaurant.

Brussels police have said that just before 1pm, August 26 the driver drove into the terrace in Sint-Michielsstraat.

None of the six injured were taken to hospital. CCTV footage from the scene shows a white van hit part of the outdoor seating area, knocking several customers out of their chairs.

The van then continues on and begins to turn onto another road. The driver reportedly hit two terraces, a café and a tavern.

One witness told the Belgian broadcaster VRT: “The driver drove from left to right down the street and hit everything he came across. We, my girlfriend and I, had to jump for our lives.”

However, Brussels mayor Philippe Close who reviewed the footage said that it was too early to determine the drivers motive. He did confirm that the footage showed that the driver acted alone.