The incident was just one of many recorded by terrified victims of the most intense storm to hit eastern India for 20 years. Sky News explained: “The Indian authorities say around 1.2 million people have ben forced from their homes by Cyclone Fani; the biggest storm to hit the country since 2014. Boats, buses and trains have been used to move people to safety as the cyclone batters eastern India.

“The cyclone had been circulating in the Bay of Bengal before battering the eastern coastal state of Odisha with heavy rains and wind speeds of over 120 mph.

“Trees bend like twigs under the force of Odisha’s fiercest storm in 20 years.

“As it peels the roofs of buildings and hurls debris through the streets, powerless, those in its path can only watch the destruction.

“But even inside they aren’t safe from its fury.” 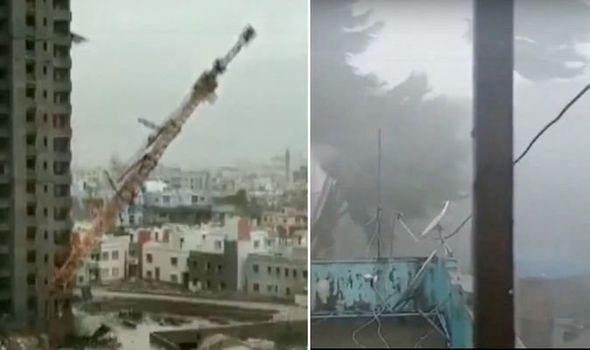 Bangladesh, which lies further up the path of Tropical Cyclone Fani, ordered the evacuation of 2.1 million people before the storm arrives on Saturday.

Indian government spokesman Sitanshu Kar said there were no reports of deaths but 160 people were believed injured.

Fani spent days building up power in the northern reaches of the Bay of Bengal before it struck the coast of Odisha at around 8 a.m., the state-run India Meteorological Department (IMD) said.

Cyclone tracker Tropical Storm Risk put Fani as a powerful category four storm on a scale of one to five. The IMD said the storm was now weakening.

Close to 60 km (37 miles) inland, winds brought down electricity poles in Bhubaneswar, where authorities had ordered the airport to stay closed. Schools and colleges in Odisha were also shut. A major hospital in the city suffered extensive structural damage but all patients and staff were safe, authorities said.