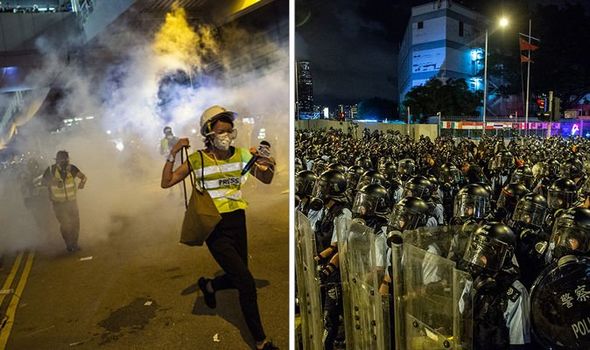 Around 550,000 people have taken to the streets in Hong Kong to protest against the now-suspended extradition bill that would allow people to be sent to China to face trial in courts controlled by the Communist Party. Protesters have even broken into the Legislative Council debating chamber and have resorted to spray-painting messages on the walls. Hong Kong riot police have taken back the city’s parliament from anti-government protesters who had taken over the building.

Hong Kong chaos: Why China is terrified of British-inspired uprising

This has left the police officers lining up outside the government building carrying riot shields and wearing goggles and breathing equipment.

The demonstrators are concerned that China’s justice system is stained by torture, forced confessions and detentions.

The extradition proposals has raised fears of curbing freedoms in the country, protesters want the bills to be formally withdrawn and Hong Kong’s leader Carrie Lam to stand down. 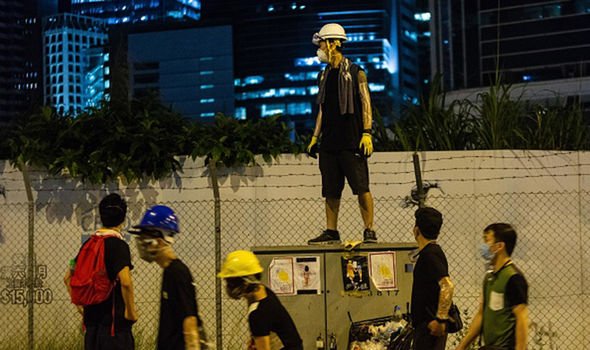 After Hong Kong ended its more than 150 years as a British colony in 1997, residents were not automatically given British citizenship

The Chinese government has issued a condemnation of the protesters calling them “totally intolerable”.

The Chinese government said: “Some extreme elements used excessive violence to storm the legislature building and carried out a series of large-scale assaults. This is shocking, heart-breaking and angering.

“Their violent acts are an extreme challenge to Hong Kong’s rule of law and seriously undermined Hong Kong’s peace and stability. It is totally intolerable.”

It is thought that public support could weaken following scenes of demonstrators wreaking havoc on government buildings.

Speaking of the protests, Ms Lam said: ”This is something that we should seriously condemn, because nothing is more important than the rule of law in Hong Kong.

“So I hope the community at large will agree with us that with these violent acts that we have seen, it is right for us to condemn it and hope society will return to normal as soon as possible.”