HONG KONG (Reuters) – Hong Kong leader Carrie Lam said on Tuesday she hoped a peaceful weekend anti-government protest was the start of an effort to restore calm and that talks with non-violent protesters would provide “a way out” for the Chinese-ruled city. 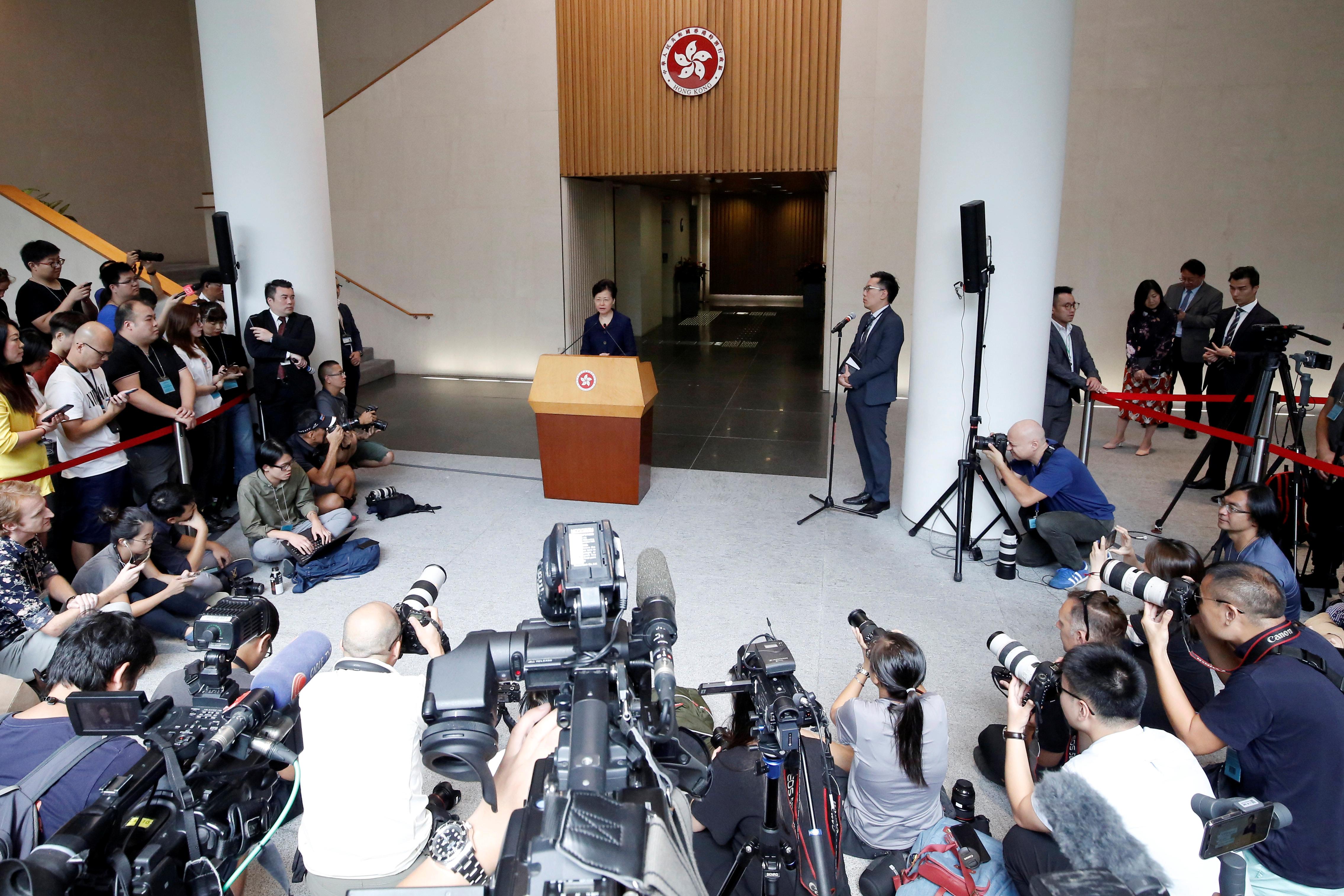 Hundreds of thousands of protesters rallied peacefully in torrential rain on Sunday in the eleventh week of what have been often violent demonstrations.

“I sincerely hope that this was the beginning of society returning to peace and staying away from violence,” Lam said.

“We will immediately start the work to establish a platform for dialogue. This dialogue, I hope, will be based on a mutual understanding and respect and find a way out for today’s Hong Kong.”

Anger erupted in June over a now-suspended bill that would allow criminal suspects in the former British colony to be extradited to mainland China for trial.

The unrest has been fueled by broader worries about the erosion of freedoms guaranteed under the “one country, two systems” formula put in place after Hong Kong’s return to China in 1997, including an independent judiciary and the right to protest.

Three people were wounded, one critically, in a knife attack by an unknown assailant near a “Lennon Wall” of colorful pro-protest messages in the city’s Tseung Kwan O district in the New Territories overnight, police said. One man was arrested.

The protests have prompted sharp reactions from Beijing, which has accused foreign countries, including the United States, of fomenting unrest in the territory. China has also sent clear warning that forceful intervention is possible, with paramilitary forces holding drills in neighboring Shenzhen.

Britain’s Foreign Office said it was extremely concerned about reports that a Hong Kong staff member had been detained in mainland China, but there was no immediate suggestion that there was any link to the protests.

Twitter Inc and Facebook Inc also said on Monday they had dismantled a state-backed social media campaign originating in mainland China that sought to undermine protests in Hong Kong.

Further protests are planned in the next few days, including by MTR subway workers on Wednesday, secondary school students on Thursday and accountants on Friday.

The protests are exacting a toll on the city’s economy and tourism, with the Asian financial hub on the verge of its first recession in a decade.

Singapore’s foreign ministry said in an advisory last week large protests in Hong Kong had become unpredictable and could turn violent with little or no notice.

Sunday’s protest turnout, which organizers put at 1.7 million, showed that the movement still has widespread support despite chaotic scenes last week when protesters occupied the airport.

Some activists had apologized for the airport turmoil and protesters could be seen on Sunday night urging others to go home peacefully.

Aside from seeking Lam’s resignation, demonstrators have five demands – complete withdrawal of the extradition bill, a halt to descriptions of the protests as “rioting”, a waiver of charges against those arrested, an independent inquiry and resumption of political reform.

“The bill is dead,” Lam told Tuesday’s news briefing. “There is no plan to revive the bill, especially in light of the public concerns.”

Police have been criticized for using increasingly aggressive tactics to break up demonstrations but there was a minimal police presence on Sunday and no arrests were made. More than 700 people have been arrested since June.

Lam said the police watchdog had set up a task force to investigate complaints.

She said she hoped Hong Kong had “unique advantages in attracting overseas companies”, stressing the rule of law, but warned of the risk of pressure on the economy which shrank 0.4% in April-June from the previous quarter.

China has put strong pressure on big companies in Hong Kong over the protests, especially Cathay Pacific Airways. CEO Rupert Hogg quit in a shock move last week after Beijing targeted the airline over staff involvement in the protests.

Hogg’s departure was announced by Chinese state television and was seen as a signal to other multinationals, such as HSBC Holdings and Jardine Matheson Holdings, to support Beijing. 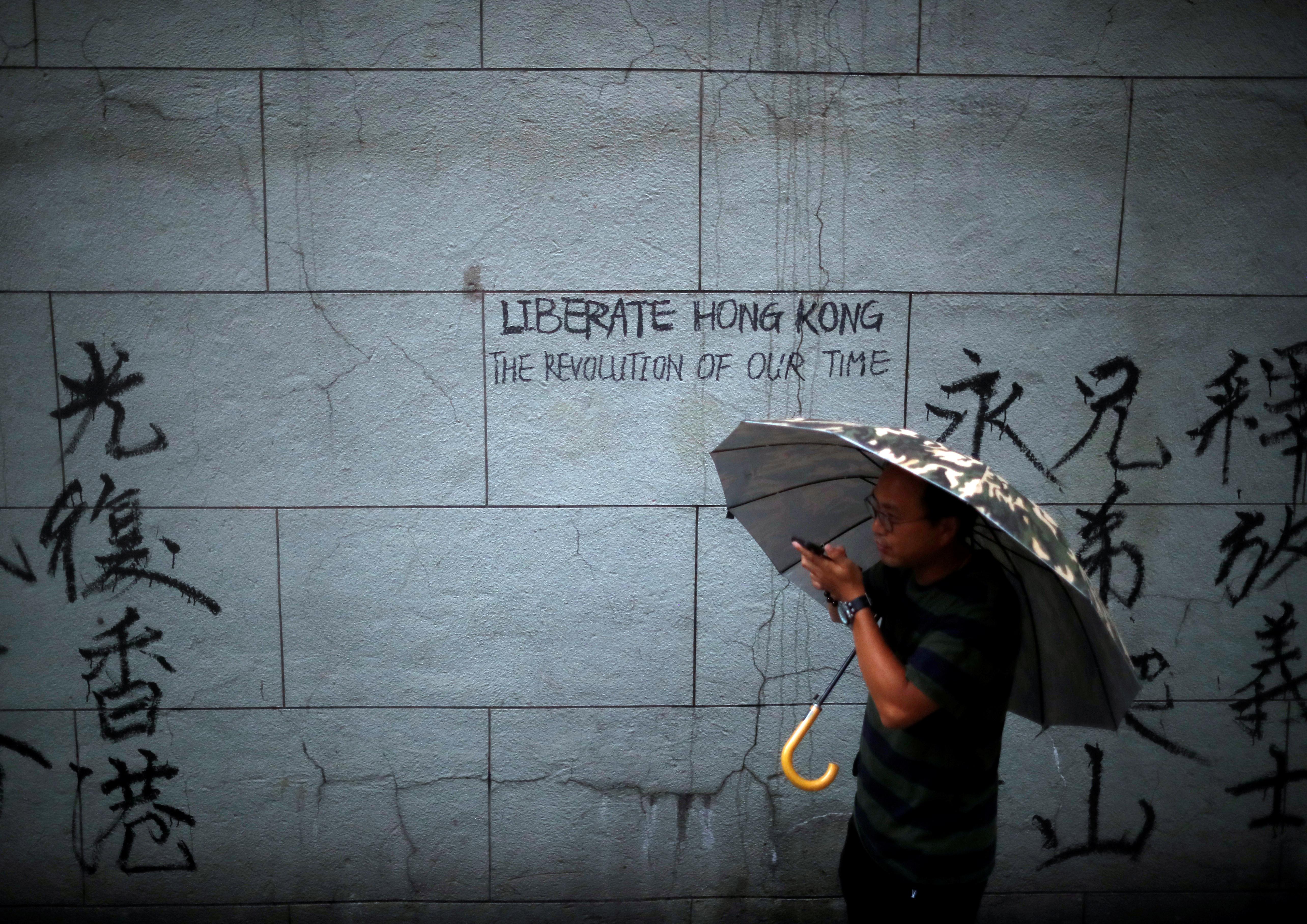 China’s State Council called on Monday for greater development of the southern city of Shenzhen and integration of its culture and economy with neighboring Hong Kong and Macau, a former Portuguese-run enclave that returned to China in 1999.