Alan Bennett’s former home that featured in film The Lady In The Van has become a run-down magnet for drunks and drug addicts, neighbours say

Alan Bennett’s former home that featured in the film The Lady in the Van has become a ‘magnet for drunks and drug addicts’.

Neighbours have complained over the state of the dilapidated former home of the legendary British playwright and are now welcoming plans to restore it.

The home in Camden, North London, which Mr Bennett bought for just £13,500 in 1969, became known after he let a homeless woman named Margaret Fairchild live on his driveway in different vans for 15 years.

Mr Bennett wrote the novel The Lady in the Van after she died in 1989 and it was subsequently adapted in a 2015 British comedy-drama starring Dame Maggie Smith and Alex Jennings – which was filmed at his home.

He sold the property in 2017 after listing it with a guide price of £3million. It last changed hands in December 2019 for a price of around £2million.

Since then neighbours claim it has become ‘dilapidated and is a magnet for antisocial behaviour.’ 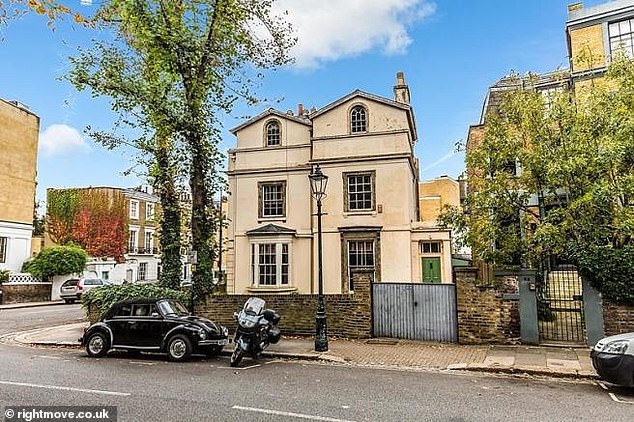 Alan Bennett’s Camden home – which was the setting of The Lady in the Van – has become ‘dilapidated and a magnet for antisocial behaviour,’ neighbours say 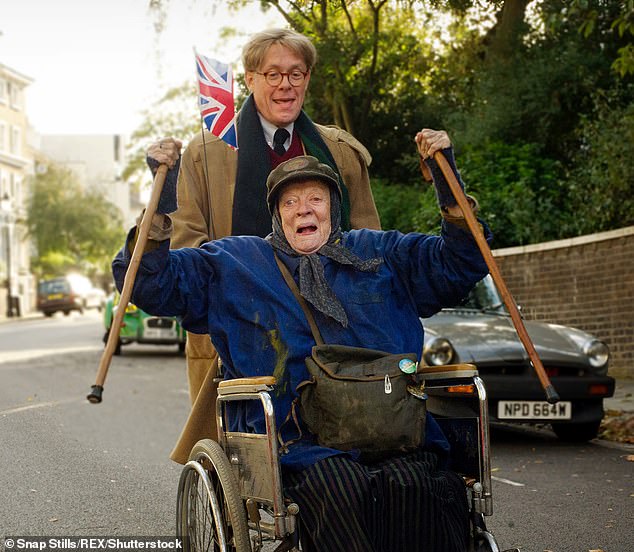 The British playwright allowed filming for the 2015 adaptation of his book, starring Dame Maggie Smith and Alex Jennings, to be filmed outside his home

Council planners will this month consider the proposals to transform the home, which include removing a leaking terraced roof at the front of the property, installing a damp proofing system and a smoke detector.

Plans to restore the home will see a hearth reopened for an internal cooker and dado panelling dating back to 1968 restored.

Original fixtures will be used to hang radiators inside, while iron guttering will be installed on the roof.

The sons of playwright Sir Jonathan Miller both live opposite the house and are backing the plans. 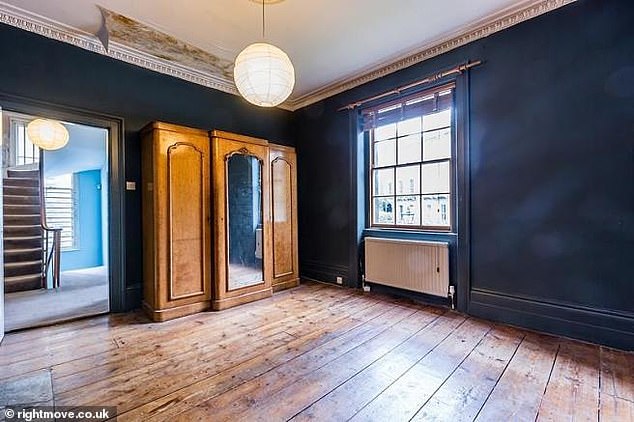 Mr Bennett purchased the property for £13,500 in 1969, but put it up for sale with a guide price of £3million in 2017. Last December it was purchased for around £2million 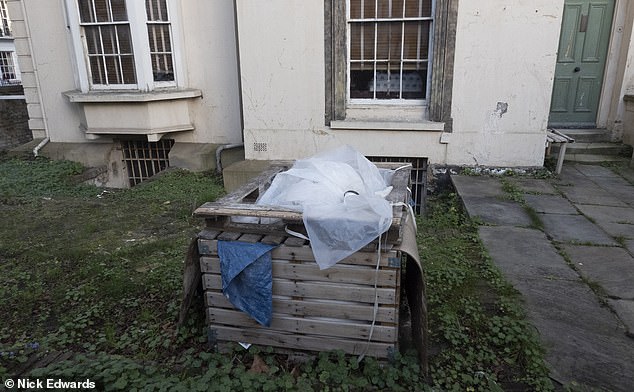 The home in Camden has been empty for the past five or years, with locals complaining that is has started to attract anti-social behaviour 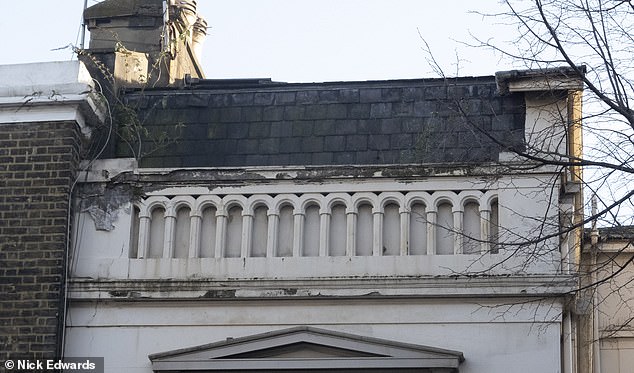 Work to the roof and outside of the house is set to go ahead, subject to council approval, which will include iron guttering

William Miller said in documents submitted to Camden Council: ‘The house has pretty much been empty for the last five years and is now falling down and has been suffering from neglect.

‘Its current state leaves it open to vandals and encourages the kinds of ASB that are worrying in the Crescent and the current derelict state of the house and front garden leaves it wide open as a place for drug dealing and drunks to hide out.

‘So we 100 per cent support this application believing it is both essential and in keeping with an architecturally important house and street.’ 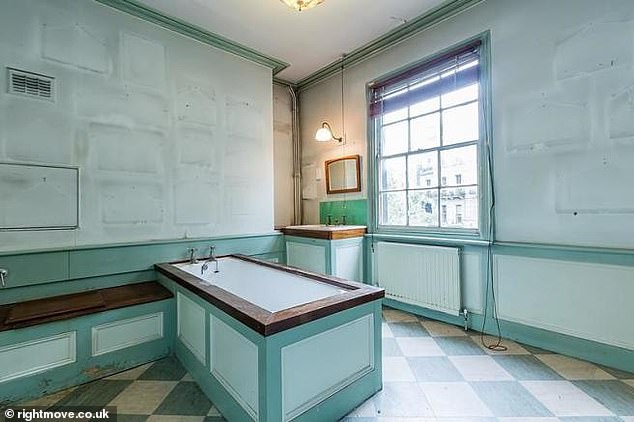 Neighbours have welcomed plans to renovate the home, after an application was sent to the local council to fix a leaking terraced roof at the front of the property, install a damp proofing system and a smoke detector. 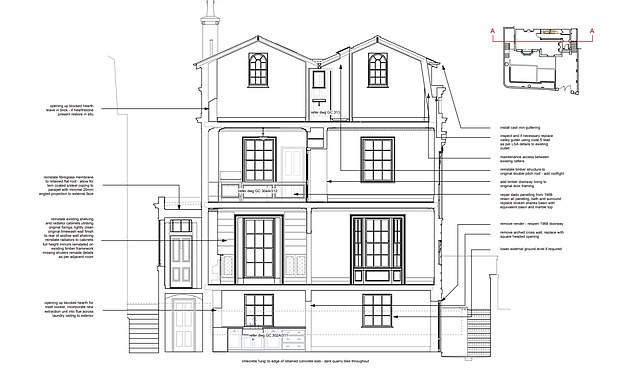 Plans to restore the home will see a hearth reopened for an internal cooker, while iron guttering will be installed on the outside. Original fixtures will be used for radiators and other items, while dado panelling from 1968 will be restored 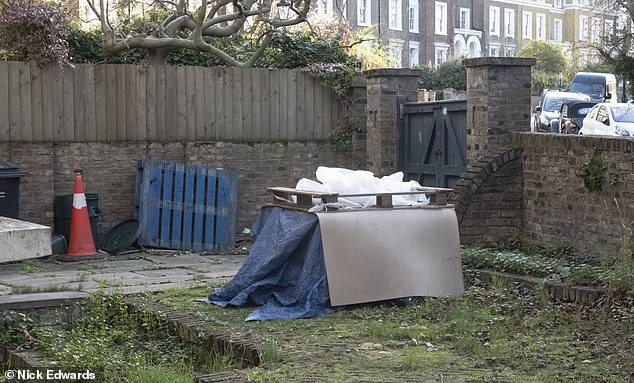 The property is listed, meaning any works to the inside or outside require prior approval from the local authority, Camden Council

His brother Tom added: ‘Having lived across the street from this house for most of my life and known it (and the previous owner) well, I can’t see any problems with this application.

‘In fact the alteration will only help to reinstate the original aesthetics of the building and help prevent it from falling into further decay.’ 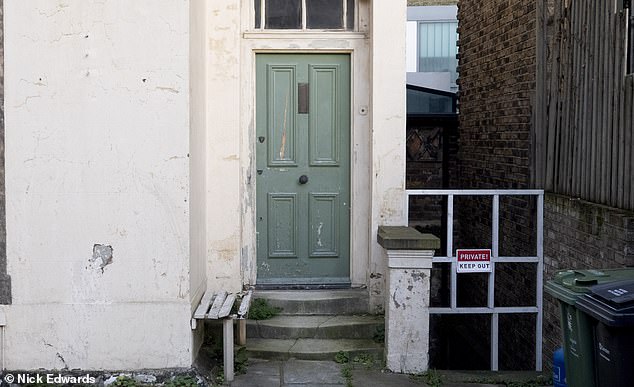 Filming for The Lady in the Van took place at Alan Bennett’s former home, but the house has fallen into disrepair since the film’s release in 2015 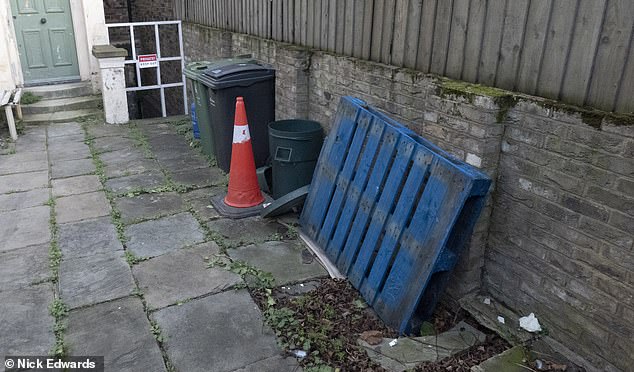 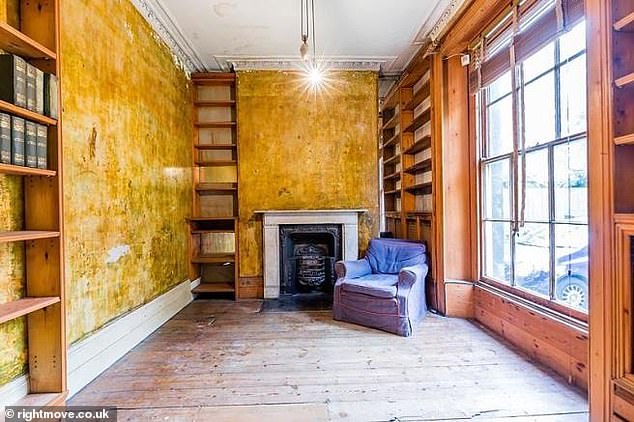 Locals say the house is known for its ‘obvious architectural, historical and literary renown,’ after Bennett let a homeless woman named Margaret Fairchild live on his driveway in different vans for 15 years – following her death in 1989, the writer immortalised her story in his book The Lady in the Van

‘The property has become dilapidated and is a magnet for antisocial behaviour, e.g., drinking and drug dealing.

‘It will be excellent to have a family living there and their proposed improvements to the property are sensitive and appropriate to the aesthetics and architectural merits of the immediate area.’

Another neighbour Ewen Fergusson added: ‘Very pleased to see this house which has been empty and looking derelict being restored and occupied – it has been a location for anti-social behaviour for a few years now.

‘The scope of work looks very sensible and proportionate and I can’t see anything to object to.

‘Really pleased the roof terrace is going as it did look out of character.’

Hugo Drayton said: ‘We have lived as a family in this house for 17 years.

‘Number 23 is a hugely important part of the Crescent, forming the corner with Inverness St, as well as its obvious architectural, historical and literary renown. 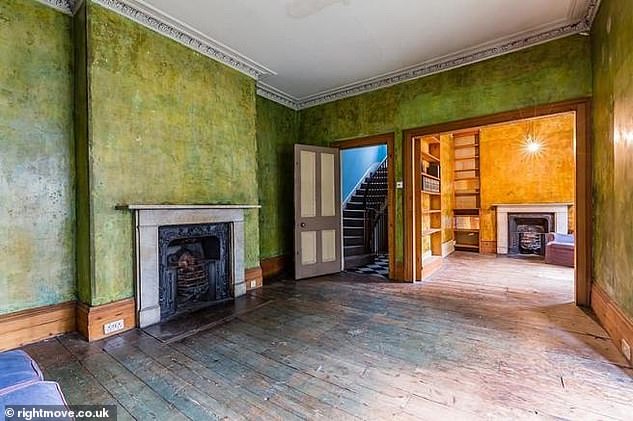 There are hopes a family could move into the property, as neighbours fear it is being used for ‘drinking and drug dealing’ activity 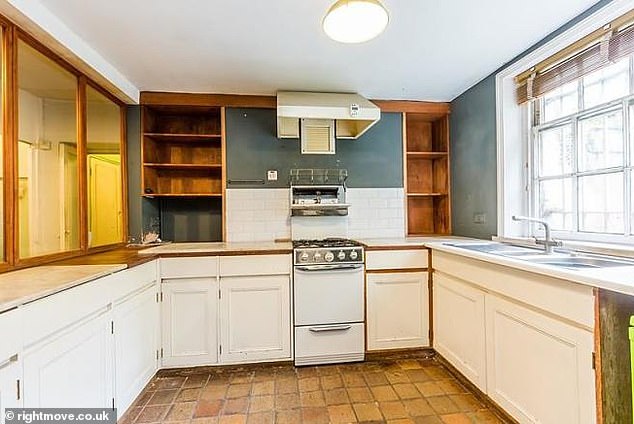 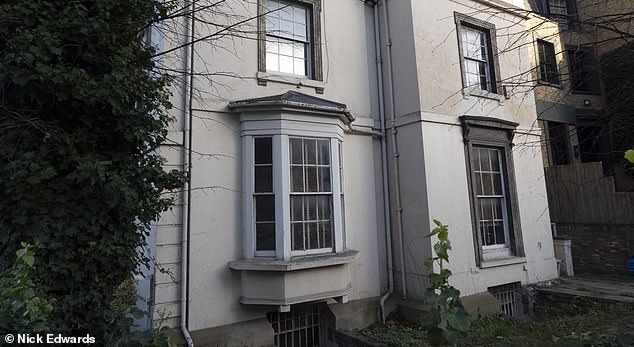 William Isaac Lander, believed to be a restaurant group’s director, and Henrietta Spiegelberg bought the property in December last year for £2,050,000

‘We are delighted that the new owners are ready to update the house: it has been in a sad state of disrepair for several years, and has been (still is, while it lies empty) a magnet for criminal and delinquent behaviour.

‘The plans put forward by the new owners have our total support: they will bring the house up-to-date, and improve the safety and the visual appeal of the Crescent; it is very positive news that the new owners will restore the building as a proper, balanced family residence, in keeping with the street and other sensitive updates which have been completed in recent years.

‘The changes they have planned make total sense in the context of the house and its environment.’ 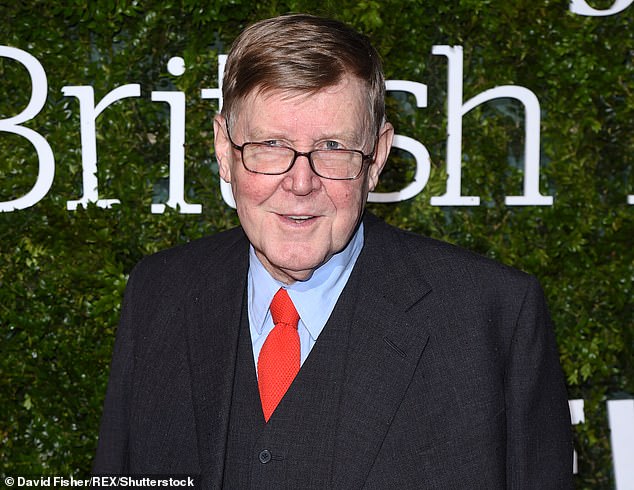 Mr Bennett, 86, whose works include The History Boys and Talking Heads, owned the property for nearly 50 years, but lived in it for closer to 40 years after moving to Primrose Hill 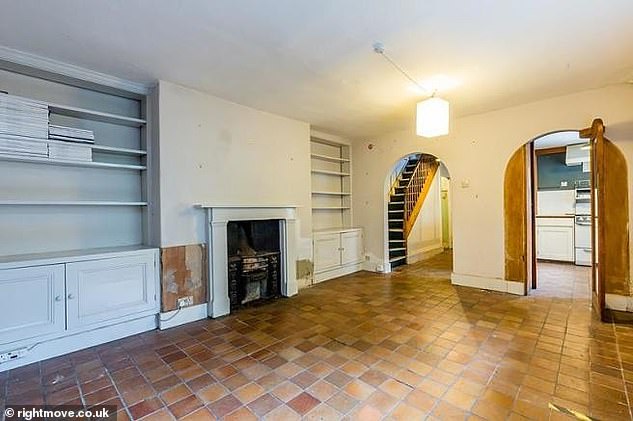 Gloucester Crescent is home to other famous literaries, including the sons of British theatre and opera director Jonathan Miller, who have both backed proposals to renovate Mr Bennett’s former home 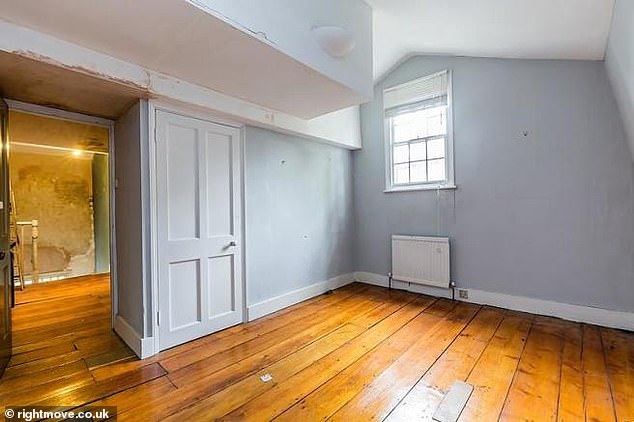 In its design plan, architects Arts Lettres Techniques Ltd said: ‘The house is to become a family home again rather than a museum and the current proposal seeks to make that transition of ownership, whilst retaining a tangible presence of the former occupants through retention of many of his 1969 interventions in the house.’

William Isaac Lander, believed to be a restaurant group’s director, and Henrietta Spiegelberg bought the property in December last year for £2,050,000.

Alan Bennett lived in the house for about 40 years before he moved to nearby Primrose Hill.

He allowed Ms Fairchild to live on his drive after Camden Council introduced parking restrictions in 1974.

Ms Fairchild is buried nearby in an unmarked grave.