London: The Palace of Westminster, with its cinematic Big Ben clock, set beside the River Thames, is a survivor – of epic fire, German bombs, sulfuric smog and bad plumbing.

An eccentric masterwork of Victorian genius, its dual chambers for lords and commoners are the living, breathing heart of constitutional monarchy, the home of Parliament, and one of the most photographed buildings in the world. 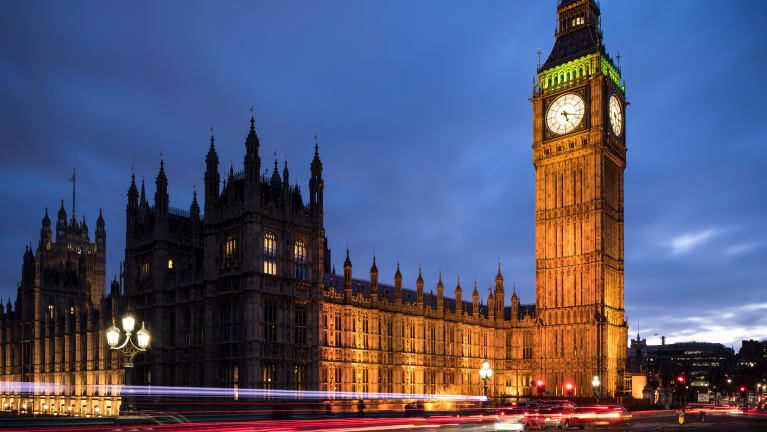 Westminster is one of the most photographed buildings in the world, but rotting from the inside.

But Westminster is a wreck, its caretakers say.

The palace is not falling down. Not at all. Its bones, the superstructure, are solid enough, and carrying on, in British fashion, even if its dermis of Yorkshire limestone is spotty.

Rather, Westminster is rotting from the inside, its water and waste pipes sclerotic, its ventilation shafts congested, its neural networks – the communication, electric, fire systems – nearly shot.

And so earlier this year, after a decade of delay, study and debate, British lawmakers approved one of the most ambitious restoration projects of the modern age, a £3.5 billion ($6.3 billion) scheme that would see the entire Parliament – the lawmakers, clerks, staff, guards, journalists, bartenders, everybody – decamp to nearby buildings for six years while a massive refurbishment is undertaken. 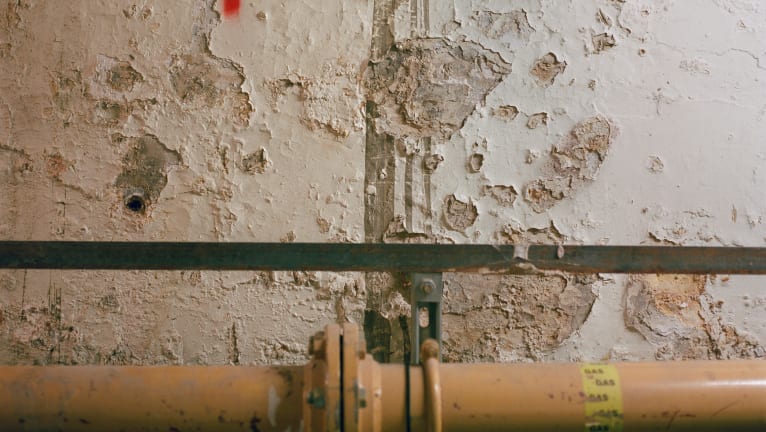 Moisture in the plaster has caused this basement wall to peel.

The work is scheduled to begin in 2025, with the hope that, sometime in the early 2030s, Parliament will return to its home. Exact dates are fuzzy, because the restorers say they won't really know what they're dealing with until they start ripping things apart.

Those who love the building all reach for the same metaphor: They describe Westminster as a living entity, which has reached a ripe old age and desperately needs a lifesaving operation.

The Washington Post wrangled an invitation to tour the guts of Westminster – guided by Tom Healey, director of the restoration and renewal program, and Robert Stewart, lead engineer for the same.

Our journey began when we stepped into an aging retrofitted elevator the size of an upright coffin to descend to the Dickensian depths.

"Watch your heads!" Healey called upon entering the dank catacombs. Here, even a short man walks the claustrophobic corridors bent over.

"Best not to touch that," Stewart advised as we reached toward a dodgy coil of cable, as thick as a gorilla's arm. Maintenance workers carrying bags of tools and balancing cups of tea passed by, muttering, "pardon, pardon." 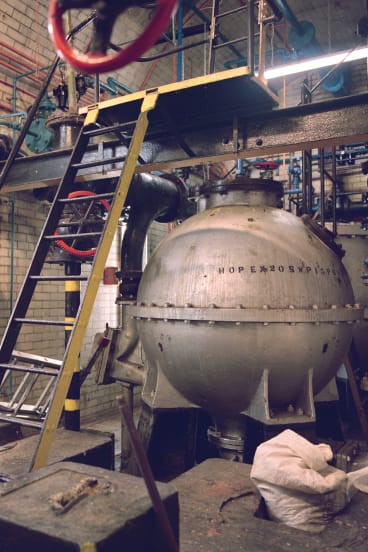 The Victorian sewage-ejector system dates from 1888.

Floors above our heads, in the spectacular legislative halls, central lobby, gardens and grand rooms, Westminster is a dusty jewel, a stage set. But a keen eye can spot the symptoms of decrepitude.

The roofs leak, badly – sometimes there are buckets to catch the weepy drip in the Lords chamber. Moths are nibbling at Augustus Pugin's wallpaper, mice scurrying across the encaustic tiles, and bad humours rising from the bowels below, where an 1880s sewage ejector plays the role of Sisyphus, condemned to spend its eternity trying to keep up with the flushing loos above.

Which are failing, by the way, occasionally catastrophically.

One of the classic complaints came from Ben Bradshaw, a member of Parliament for the Labour Party, who tweeted, "Urine seems to be pouring through the ceiling into my Commons office for the second day running!" 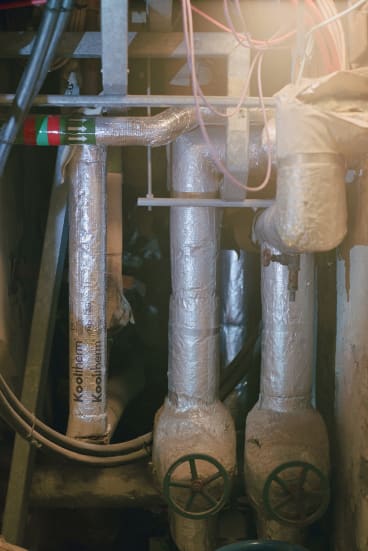 The original medieval palace mostly burned down in 1834, a conflagration set by two workers ordered to burn tally sticks – short wooden pegs used to account for taxes owed and paid. Awestruck mobs gathered in the streets and hired river boats on the Thames to lament – and to cheer on – the great fire.

The competition to create a purpose-built home for Parliament was awarded to the architect Charles Barry, with construction contracted to steam-powered railroad builders, who began in 1840, finished in 1870 – only 26 years overdue with a tripling of the budget.

The Westminster complex covers eight acres, 17 football fields, and has more than 125 staircases and 1,100 rooms, probably more, and almost 5 kilometres of passageways.

The palace sees thousands of staff and lawmakers a day pass through and a million visitors a year. The kitchens serve up to 3,000 meals a day in the old-school dining rooms, another 2,500 in the modern cafeteria, and untold cups of tea.

There are eight bars. 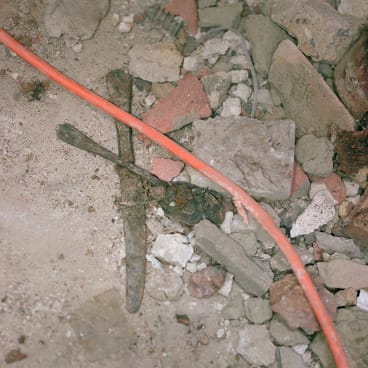 The palace is alive.

"Westminster does feel like a living presence, an organic machine for making legislation," said Caroline Shenton, the former director of the Parliamentary Archives and author of "Mr. Barry's War," the story of rebuilding of the palace after the 1834 fire.

"This is a body that does stuff," she said.

But its current state, she told The Post, is "a legacy of generations of neglect," by all previous governments and departments. "Instead of ever removing the obsolete, they just added to it," Shenton said.

It's in the basements where the truth lies.

We saw a bewildering maze of custom-bent pipe and postwar landlines that dated to Winston Churchill's time. Someone had covered junction boxes with plastic bags. There were odours. Moist things. Miles of confused wire.

The engineers confessed that there had been so many ad hoc repairs and workarounds over the past half-century that no one was sure what went where.

"We can have an educated guess," said Stewart, pointing at a mass of water, electric, Internet and phone lines. 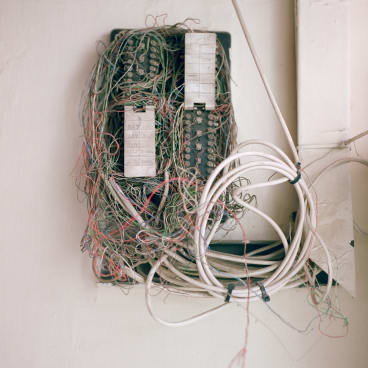 A tangle of phone wires and cables extends from a junction box in the basement.

"But a phone line to where?" He arched an eyebrow.

Say what you will, the original engineers did many things right. Today's Westminster still rests upon its 1840s massive raft of hand-mixed concrete 13 feet deep. When you are in the basements, just a few feet away are the mudbanks and flood tides of the Thames.

"So we are underwater," Stewart said.

But the complex was built for a different era – with 600 coal fireplaces, now all replaced by steam heating.

The Westminster of the mid-1800s was a marvel of its day, employing cutting-edge technology – such as air-conditioning, which never quite worked, freezing everyone in winter, stifling them in summer. 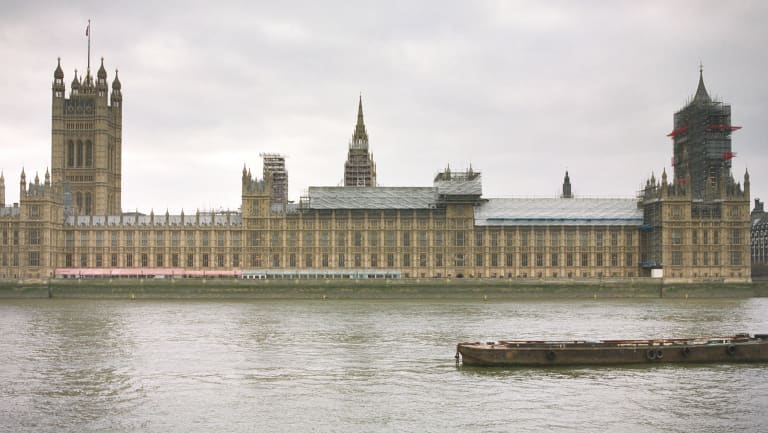 The basement is “underwater”: Westminster lies next to the River Thames.

"All the building's systems – all the pipes and wires, the power, the ventilation, the air-conditioning, water drainage, fire systems, data, security systems – all of those systems which were retrofitted into Victorian ventilation points are now really beyond the end of their usable life," Healey said.

He mentioned the palace was also an asbestos pit.

And a disaster for people with disabilities, Stewart added.

Healey said Westminster was the "best example of Victorian Gothic architecture in the world," which now has the highest energy bills in England.

"We have thousands and thousands of bronze windows, none of which closes. It's a terrible waste of heat," he said.

Repairs have been delayed for years – because the Parliament did not want to pay for them, and also because of the potential disruption.

"You can't do anything that's too noisy when Parliament is sitting, so there is always an imperative to do everything in short time frames. You need a new bit of plumbing? Somebody has to come down here and fit it in over the weekend. You need to replace a boiler? It has to be done over summer recess," Healey said.

Studies and committee reports over the past decade warned that major renovations are at least 40 years overdue. The inquiries revealed dozens of incidents that could have led to catastrophe.

Today, fire crews wander the premises 24 hours a day, seven days a week. There were a half-dozen minor but worrying blazes last year, and hundreds of toilet failures, and a crack in a main sewage pipe.

A few years back, Damian Green, a Conservative Party lawmaker, said it would be an exaggeration to describe Westminster as a "death trap" but not "a wild exaggeration."

"We can't fix it as fast as it falls apart," Healey said. "The Palace of Westminster is 150 years old, and every building has a kind of life cycle."