The cause of a three-alarm fire that ravaged a Portland historic church overnight, sparking concerns of a major infrastructure collapse, remains under investigation as of Wednesday.

Portland Fire & Rescue was called to the Old Portland Korean Church, at the intersection of Southwest 10th and Southwest Clay Street, around 5:30 p.m. Tuesday. There were reports that fire was pushing out of a church and that the flames were impinging up against the home to the east of the building.

As of Wednesday morning, water was still being poured onto the structure, though the blaze has since been deemed contained. Initially, 85 firefighters were at the scene, though the response has been downgraded to two engines and two trucks that have been operating overnight.

There is still major concern of a structural collapse of a 65-foot-tall exterior wall of the church that could take out the aerial power source for the area if it comes down, according to Portland Fire’s Public Information Officer Rick Graves, who spoke to Fox News Digital by phone Wednesday morning. 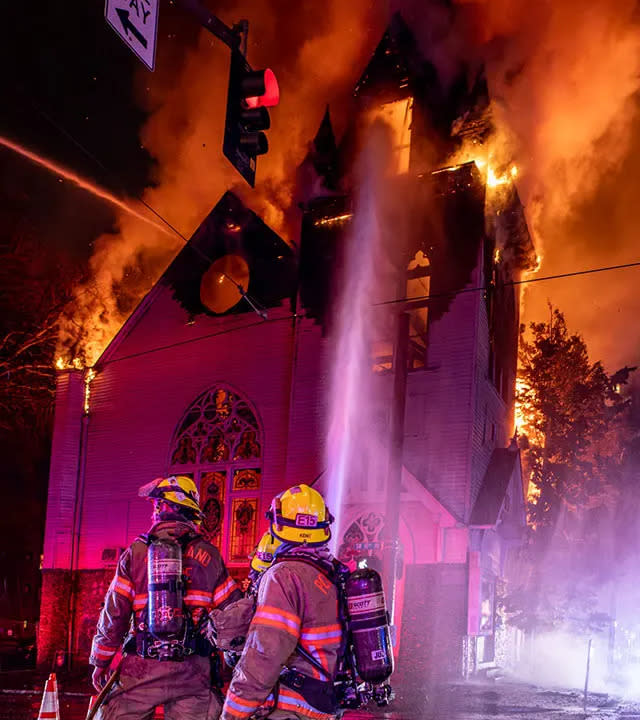 The three-story wooden, 3,000-square foot church, completed in 1905, had already been deemed unsafe in September 2020 due to previous fire activity that left major damage to the floor. 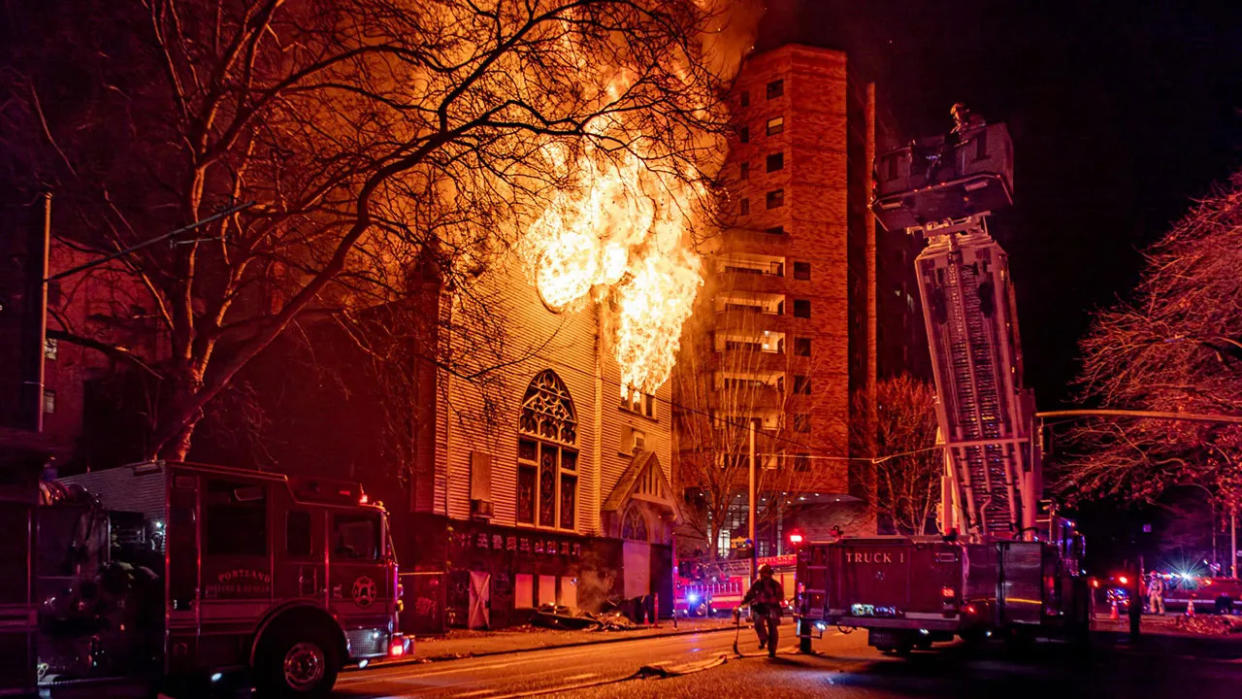 READ ON THE FOX NEWS APP

All lower-level entry points, including doors and windows, were boarded up to prevent unwanted entry, and the church was regularly checked by both the owner and a fire safety specialist, Graves said. The last inspection happened on Friday. 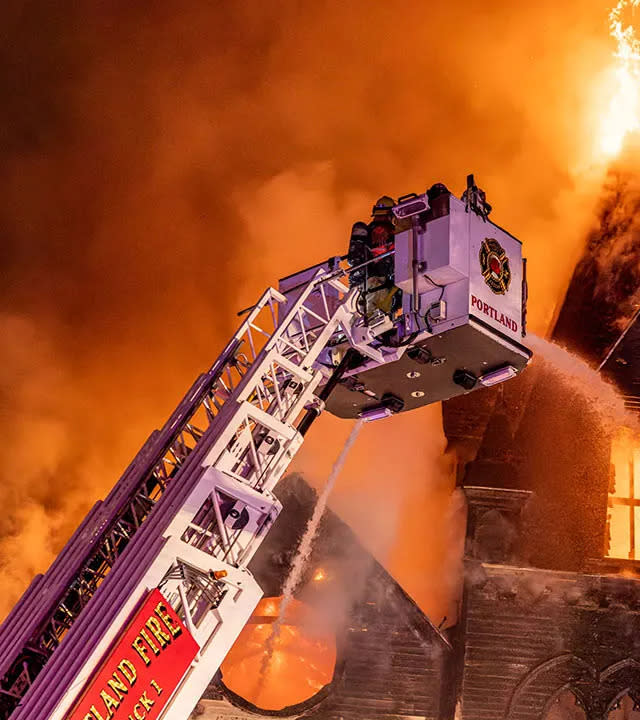 The church "was currently unoccupied and not actively in use" when the fire broke out, the department said.

"It being investigated. Any investigation by the fire investigative unit has a criminal element to it, but there’s no predetermined suspicion of criminal activity, but doesn’t mean there isn’t any," Graves said. 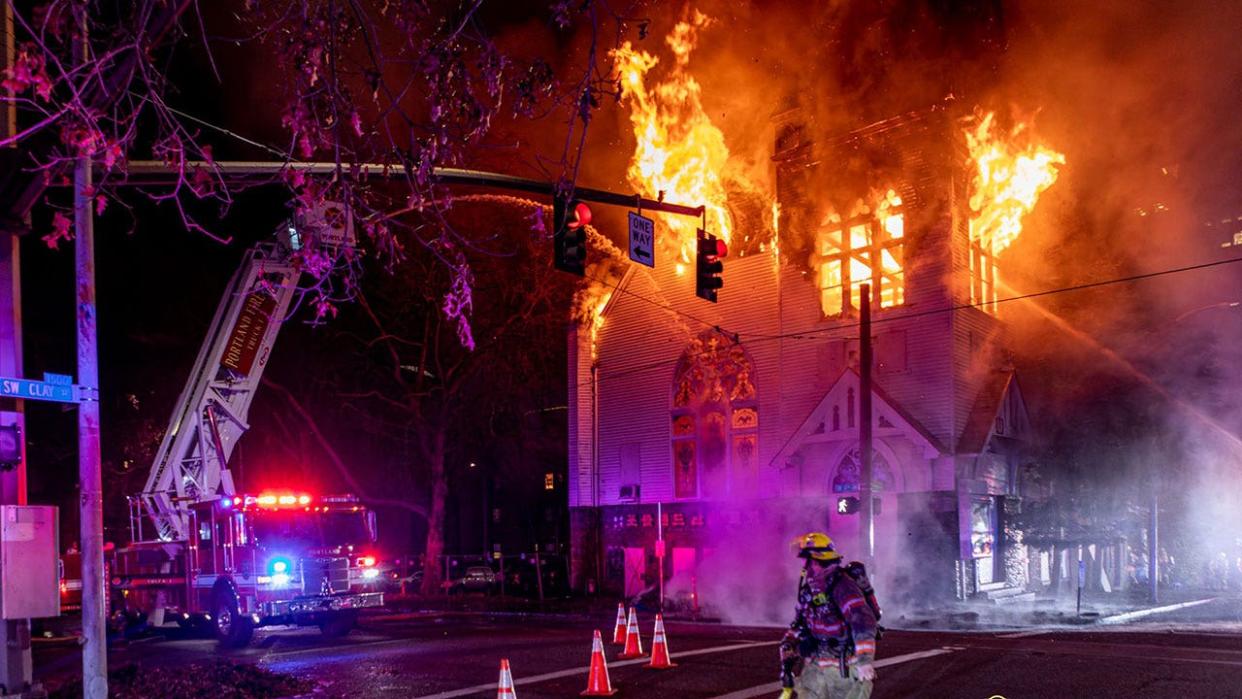 The structural stability of the church will be evaluated by the city engineer Wednesday morning. 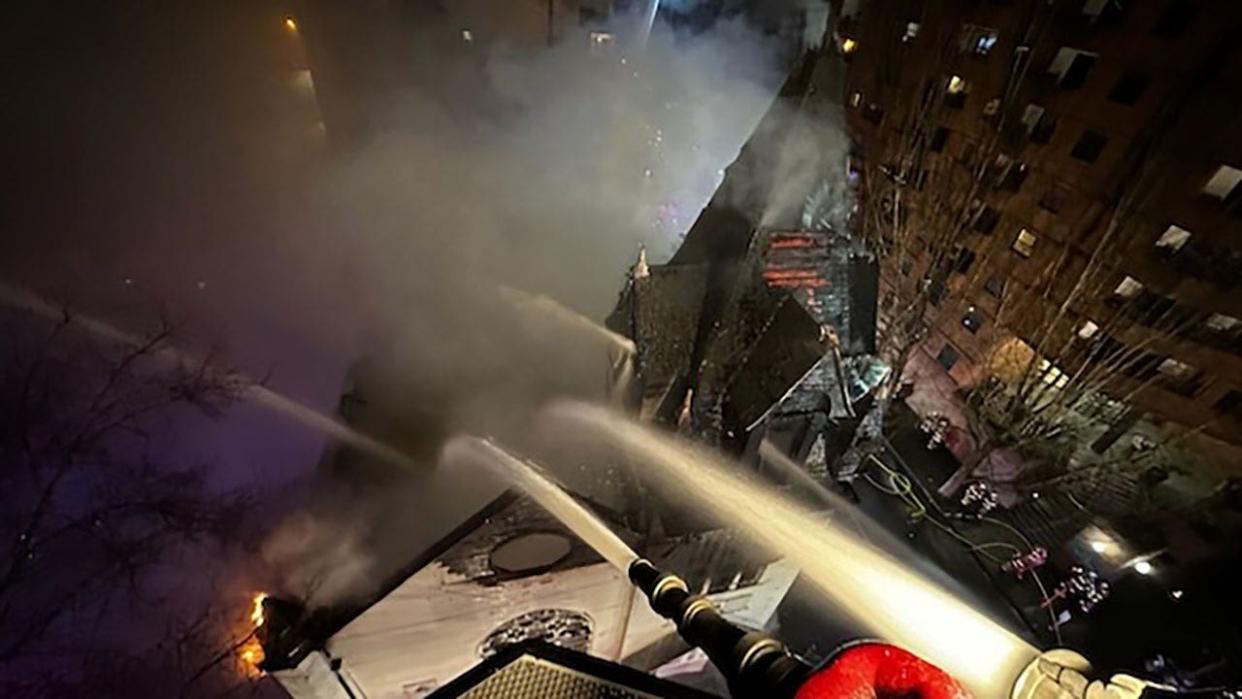 Due to the height of the steeple, a collapse would potentially reach the overhead power lines that serve the Portland Streetcar, Graves said in a statement also obtained by Fox News Digital. 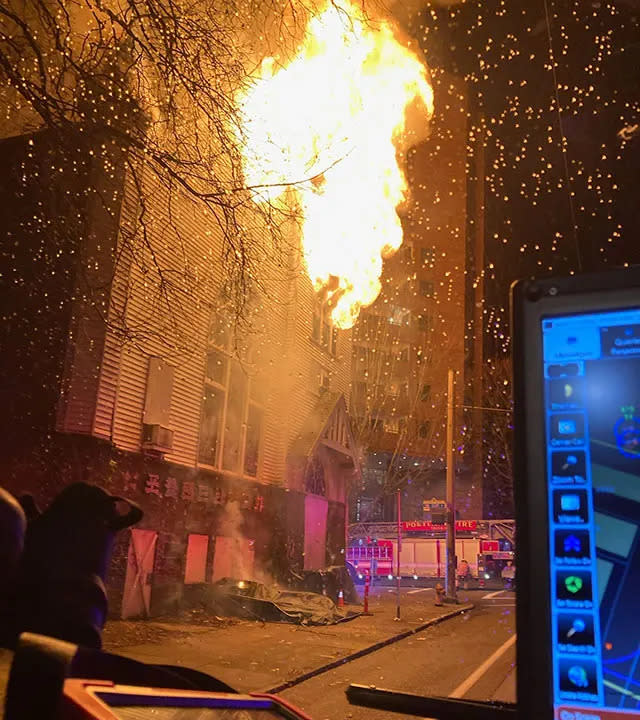 Because the structure was previously deemed unsafe, Graves explained that firefighters did not enter and deployed what is called a defensive strategy from an exterior position pouring water on the blaze. When they removed the boards on the first floor, it created a chimney effect, as the sudden airflow surged the fire up through the steeple. 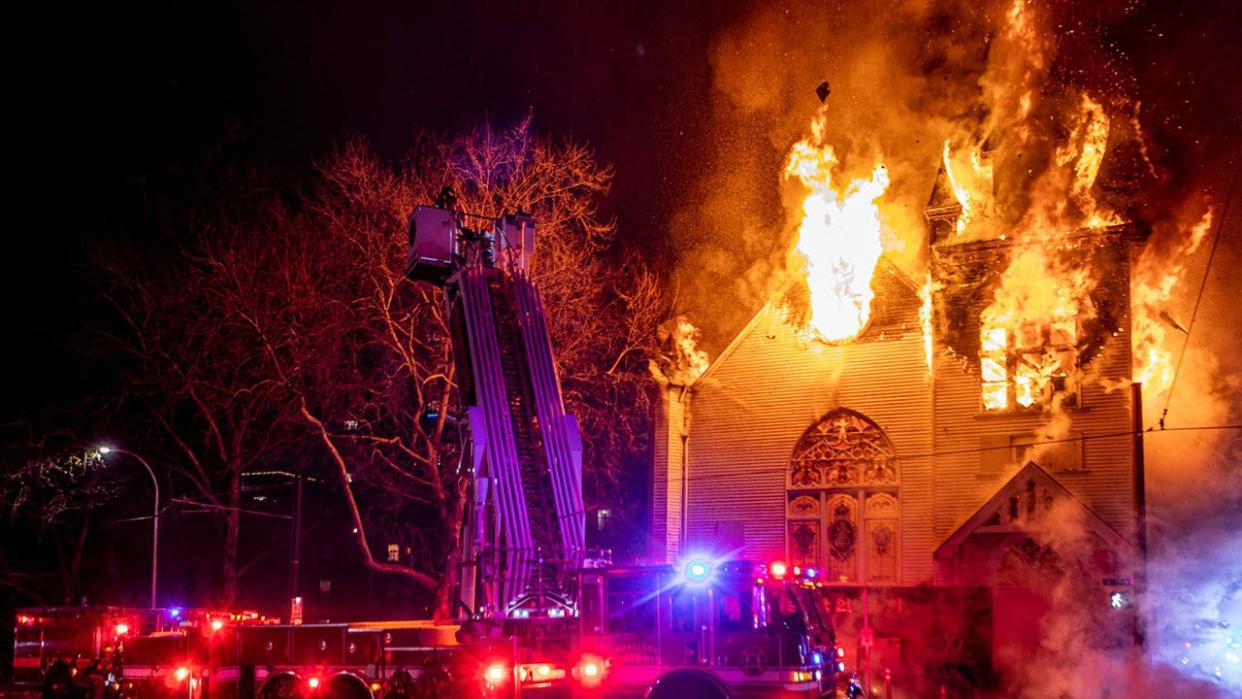 The full investigative report is not expected for some time, Graves said. 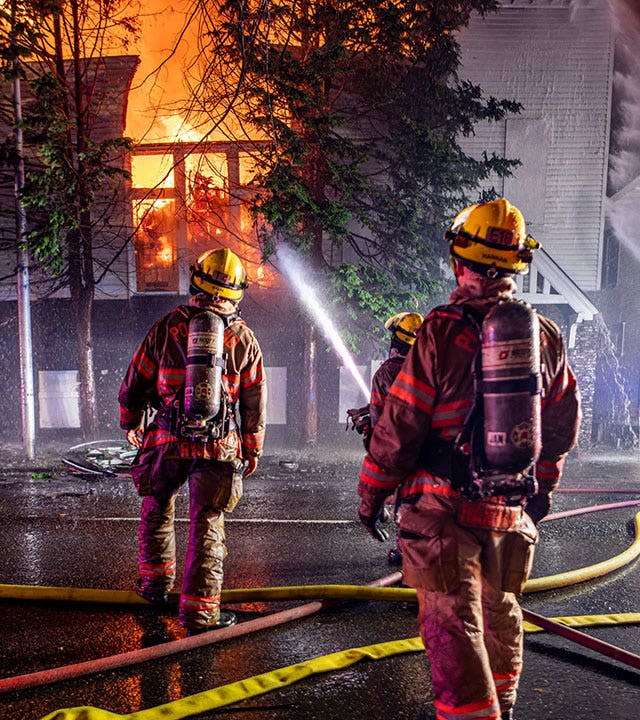 There were no reported injuries on scene. There will be five residents of the neighboring home displaced. Initially deemed a one-alarm, the fire grew aggressively in the church to a second and then third alarm status as the crews delayed by rush hour traffic hurried to set up their trucks. 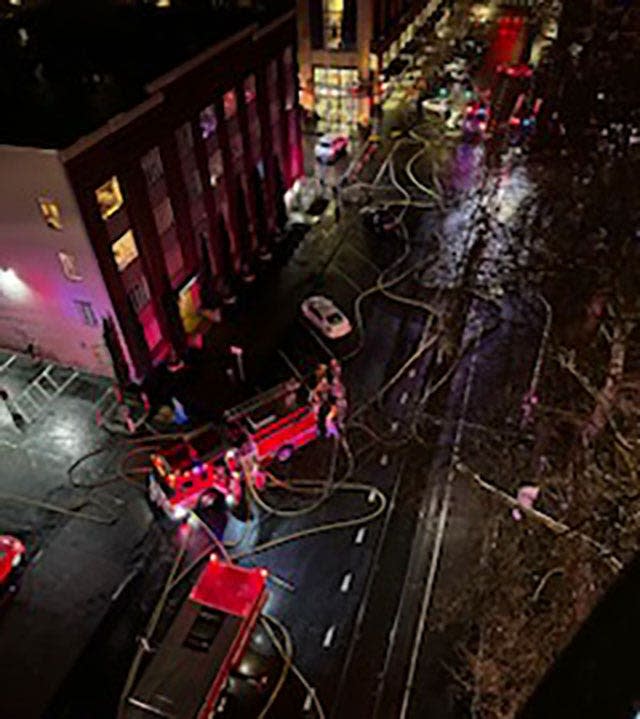 The church walls bulged and leaned due to fire damage combined with the water flow, forcing a few of the apparatus on scene to reposition out of the collapse zone.

Crews also withdrew from a nearby home out of fear the church would collapse.