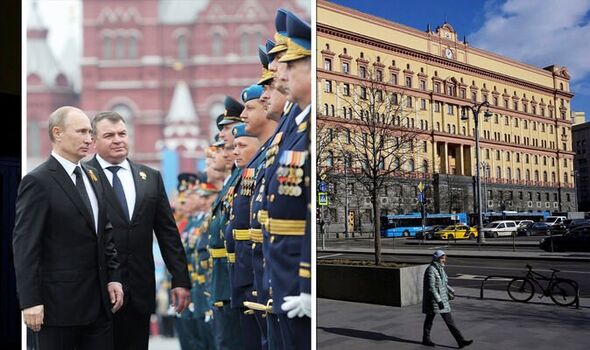 Senior officers at MI5 have briefed Home Secretary Priti Patel and her team about the high-level threat, with Special Branch tasked to increase the monitoring of travellers to the country, sources revealed.

The Prime Minister and his Chief of Staff, Steve Barclay, have been informed of the situation, while GCHQ is understood to be liaising with European colleagues.

The threats range from “deniable” attacks on key infrastructure to operations intended to humiliate the British government and reduce popular support for actions which are helping theUkrainian fight.

A security source said: “There is a serious concern that officers or agents attached to Russia’s security services may attempt to enter the UK and target strategic locations.

“We are well aware of their capabilities and have seen how Putin is using these agencies in Eastern Europe.”

Evidence has also emerged of a new and extensive disinformation campaign, said by the Foreign Office to be linked to troll farms in St Petersburg.

Ed Johnson, head of global intelligence at the Sibylline strategic risk group, said there are a range of possible targets for a would-be saboteur.

He said: “They’ll aim to sow chaos, panic or distrust in the Government.

“This could range from taking down a substation and amplifying the effect through a cyber attack, to bringing hard currency into Britain to finance separatist organisations, to targeting ministers, agents and officials and releasing embarrassing documents.

“The aim is to humiliate Britain and reduce popular support for Ukraine.

“You don’t need to blow up a power station to do this.”

He said Russia’s FSB intelligence service, disgraced over its failures in Ukraine, “now has a lot to prove”.

“Russia’s three intelligence agencies, the more traditional SVR, the military-led GRU and the FSB all have intelligence sections and they’re highly competitive.

“The FSB has a lot of ground to make up since its failed intelligence briefings to Moscow ahead of the February 24 invasion.”

He added: “It should come as no surprise that the UK is Russia’s number one target in Europe. The UK is seen as Kyiv’s staunchest ally.

“It signed a political, free trade and strategic agreement in January, before the conflict, and after the invasion it set a precedent which others followed to increase pressure on Russia.”

UK-Russian relations have been plummeting since the poisoning of former spy Alexander Litvinenko in 2006, and hit rock-bottom following the 2018 Salisbury poisonings.

Its aftermath saw the UK co-ordinating the largest expulsion of Russian intelligence officials since the end of the Cold War, with more than 100 diplomats expelled from Britain, the
US, France, Germany and Hungary.

In March, Kremlin spokesman Dmitry Peskov said Russia saw Mr Johnson as “the most active participant in the race to be anti-Russian”. Meanwhile, last night it was revealed Russia had embarked on an “extensive and large-scale” new disinformation campaign.

The operation is said to have links to a troll factory in St Petersburg operated by Yevgeny Prigozhin, founder of infamous bot-farm the Internet Research Agency.

With lessons learned from Isis and QAnon, followers keep within social media rules on Telegram, Twitter, Facebook and TikTok by targeting politicians and Kremlin critics.

They also amplify genuine and “sympathetic” accounts by boosting their reach with additional followers.

Foreign Secretary Liz Truss said: “We cannot allow the Kremlin and its shady troll farms to invade our online spaces with lies about Putin’s war.

“The UK Government has alerted international partners and will continue to work closely with allies and media platforms to undermine Russian information operations.”

Last night Dr Taras Kuzio, of the Henry Jackson Society think-tank, said: “Putin is angry that his invasion and his entry into Russian history books isn’t going to plan, and he’s angry that Russia seems incapable of attacking the military convoys entering Ukraine with weapons. He has been forced to look for other targets.

“There is no question that the UK is at the top of the table as the main suppliers of military equipment.”