Audrina Hatton-Wright has endured 14 rounds of radiotherapy after being diagnosed with a rare and aggressive cancer in July 2018.

But the tot hasn’t let it dent her spirits and she was filmed proudly ringing the bell at Nottingham Radiotherapy Centre after eight months of treatment.

In the video, the young girl was pictured walking down the hospital corridor in a Star Wars Stormtrooper outfit.

With a posse of nurses – all sporting lightsabers and masks – in tow, the youngster rings the bell to mark the end of her treatment.

She was greeted with a round of applause and celebrations as she was awarded a certificate by a nurse.

Mum Gemma Gould, 28, said Audrina wanted to mark the end of her radiotherapy in her own special way.

The young child was diagnosed with high-risk neuroblastoma – a rare childhood cancer with one of the lowest survival rates.

Since then she has spent her birthday in the hospital, endured four operations, five rounds of chemo and 14 rounds of radiotherapy.

But even after months of treatment Audrina still needs more help. 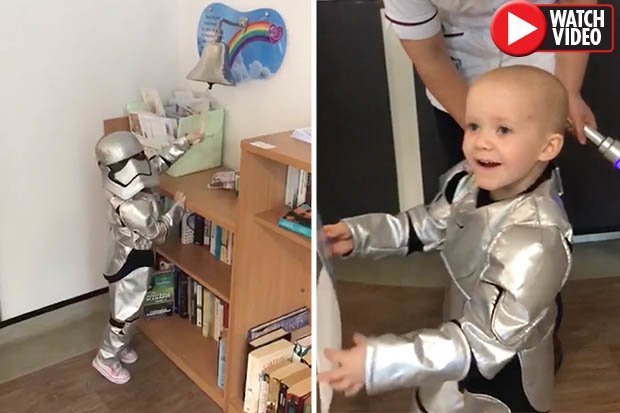 Her family say the risk of relapse with neuroblastoma is more than 50% and when it does relapse there is only a one in 10 chance of survival.

They are now battling to raise £200,000 for specialist treatment in the US to help prevent a relapse.

“We want to take her to New York and get the vaccine, it will give her a much better chance of staying cured of the disease,” said Gemma.

The youngster’s fundraising page can be found here.

Expert claims eating this one food could cut the risk of prostate cancer.