The director of Harry and Meghan’s Netflix docuseries claims Buckingham Palace tried to ‘discredit’ the couple’s bombshell allegations by claiming the filmmakers did not contact the royals for comment.

Director Liz Garbus, in an interview with Vanity Fair, claims the Palace was contacted about the series, but denied being asked for comment so they could ‘discredit the content of the show’.

Ms Garbus also revealed that the Duke and Duchess of Sussex wanted to showcase their love story and it was actually her idea to use the series as a platform to discuss ‘larger historical issues’ such as racism and colonialism.

Her remarks come as it was revealed that Meghan raised ‘gentle concerns’ about Harry’s decision to release his memoir and was worried if it was the right move. 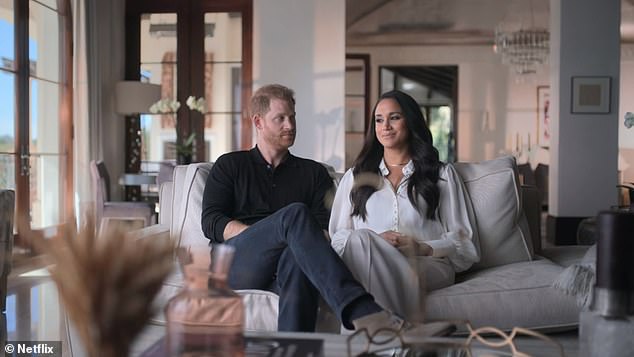 The director of Harry and Meghan’s Netflix docuseries claims Buckingham Palace tried to ‘discredit’ the couple’s bombshell allegations by claiming the filmmakers did not contact the royals for comment. The Sussexes are pictured in the show 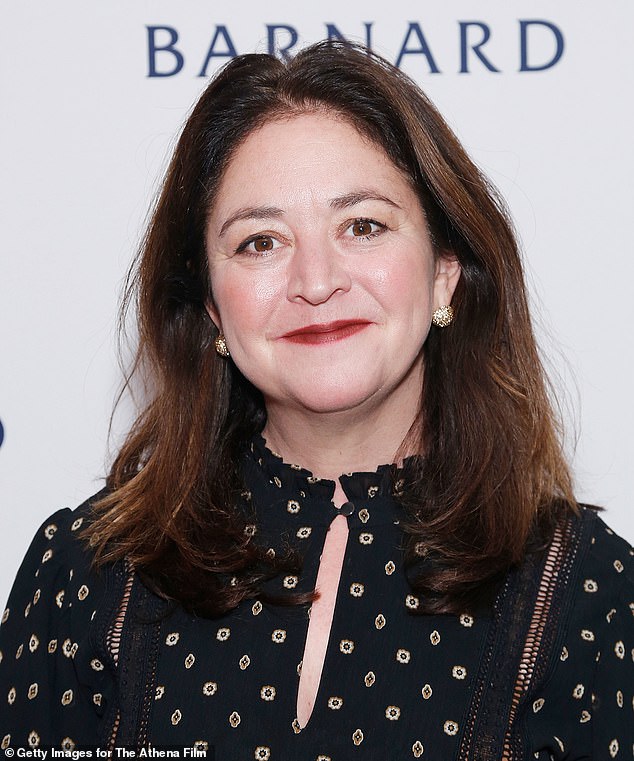 Director Liz Garbus (pictured in February 2020) claims the Palace was contacted about the series, but denied being asked for comment so they could ‘discredit the content of the show’

The release of the Harry & Meghan docuseries sparked a transatlantic war of words over whether the Royal Family were given the chance to properly respond to incendiary claims made by the Sussexes.

An insider last month insisted Buckingham Palace, Kensington Palace and members of the family were not approached for comment on content in the six-part series in a devastating blow to its credibility.

However, the show’s director is now claiming that was not the case and the royals only made those claims to discredit Harry, 38, and Meghan’s allegations.

‘For instance, Buckingham Palace said that we didn’t reach out for comment [on the docuseries] when we did,’ Garbus told Vanity Fair. ‘They did that to discredit us…and by discrediting us, they can discredit the content of the show.’

She compared their interactions with the Palace to ‘moments that were a little bit like’ the backwards world of ‘Alice Through the Looking Glass.’

Buckingham Palace declined to comment on the filmmaker’s remarks. MailOnline has approached Harry and Meghan’s Archewell Foundation and the Sussexes’ attorneys for comment. 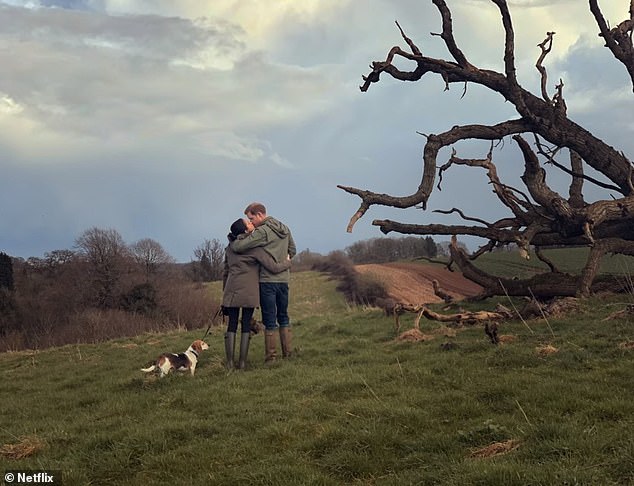 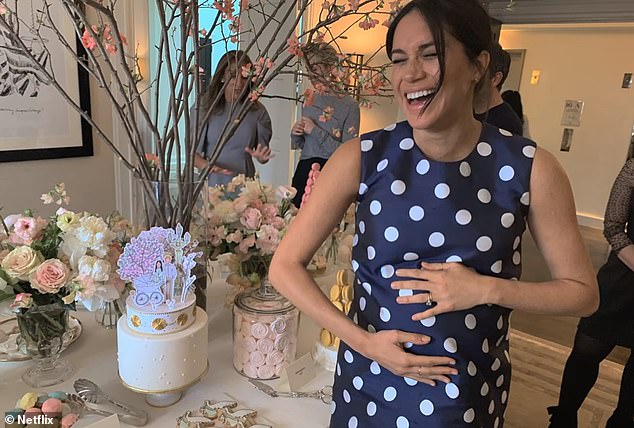 Ms Garbus also revealed that Prince Harry and Meghan Markle wanted to showcase their love story and it was actually her idea to use the series as a platform to discuss ‘larger historical issues’ such as racism and colonialism. Meghan is pictured in Episode 4 at her baby shower

Meghan Markle tells friends Prince Harry is a ‘shoo-in’ for a Grammy nod thanks to his ‘soothing voice’ and rendition of Elton John’s Your Song on the audiobook of Spare: Click here to read more 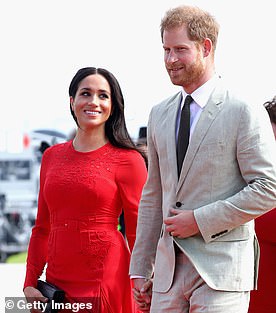 An insider told DailyMail.com exclusively that Meghan thinks Harry is a shoo-in to win a Grammy Award for Best Spoken Word for the audiobook of his memoir Spare

Ms Garbus’ comments further a row that began when at the beginning of episode one, for around 20 seconds, the screen went black apart from the words: ‘Members of the Royal Family declined to comment on the content within the series.’

But a senior source insisted the family had not been contacted.

A Netflix source then hit back, insisting the communications offices for the King and the Prince of Wales were contacted in advance and given the chance to react to Harry and Meghan’s ‘claims within the series’.

Kensington Palace then responded by saying that they had an email from a third-party production company, not Archewell or Netflix. The Prince of Wales’ aides then contacted the Sussexes and the streaming giant to verify if it was genuine, but got no reply.

‘In the absence of this verification, we were unable to provide any response. The substance of the email we received also did not address the entire series,’ a source said. A Buckingham Palace source had also disputed the Sussexes’ claims that the royals were asked to comment.

The insider stated last month, that for now, there will be no official comment from the King or the Prince of Wales on its incendiary contents, including allegations of racism and ‘unconscious bias’ and a series of barbs aimed at Charles, William, Kate Middleton and other royals.

Harry has said his family also failed to understand that his wife-to-be needed protection against racist attacks.

Ms Garbus, in her Vanity Fair interview published today, revealed exploring issues of racism, colonialism and alleged white supremacy in the British Monarchy was her idea.

‘For me, what was really important was to connect the dots to these larger historical issues,’ she told the magazine, adding that the couple was, ‘to their credit, very open and willing to journey down some of the paths that they might not have originally considered.’

‘The love story is the spine, but, for me, it was always necessary to…connect the dots to the personal story and the larger historical context,’ Ms Garbus stated. 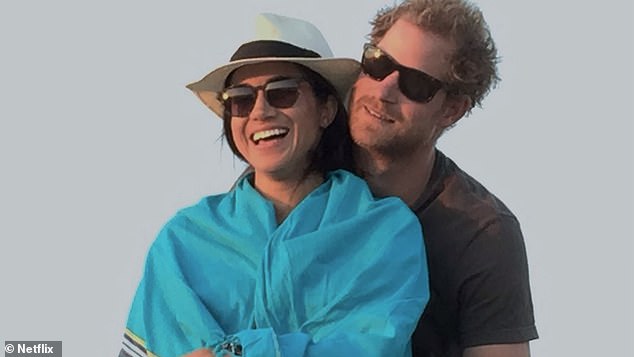 The Vanity Fair report comes on the heels of Harry’s memoir, Spare, which hit the couple’s popularity on both sides of the Atlantic. Meghan raised ‘gentle concerns’ about Harry’s decision to release Spare and was worried if it was the right move, it was claimed today. She and Harry are pictured in Episode 1 of Harry & Meghan

The Vanity Fair report comes on the heels of Harry’s memoir, Spare, which hit the couple’s popularity on both sides of the Atlantic.

Meghan raised ‘gentle concerns’ about Harry’s decision to release Spare and was worried if it was the right move, it was claimed today.

Meghan, 41, is said to have expressed concerns that the book could ruffle feathers.

The royal couple are known for putting on a united front, including during the incendiary interview with Oprah Winfrey in March 2021. Harry was also in the audience with schoolchildren in New York when Meghan promoted her book The Bench.

But as Harry released his explosive memoir, which slams his family and reveals that he killed 25 Taliban fighters, Meghan has been notably absent from any promotion or interviews.

She allegedly stayed away because she would have been accused of ‘trying to steal the limelight’ – but also ‘media-savvy’ Meghan may have raised gentle concerns about whether the book was the right move, one insider told the Telegraph.

The source said: ‘Is this the way she would have approached things? Possibly not. But she will always back him and would never have got involved in promoting such a personal project. This was about his own life, his journey and his own perspective.’

The book’s release has coincided with Harry’s popularity dropping to an all-time low after the fallout from his memoirs – in both the US and the UK. 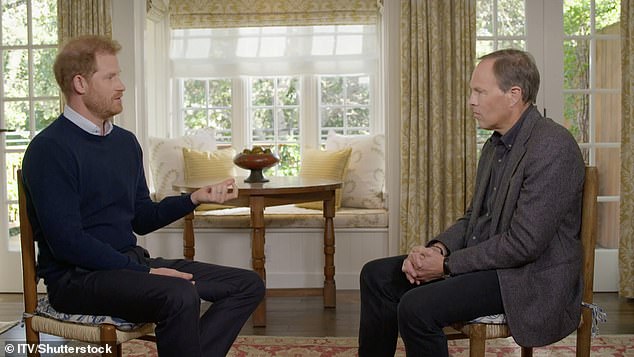 It was said by a source close to the couple that Meghan was ‘more wary’ about the extremely personal memoir than the prince was, adding she may have raised ‘gentle concerns’

The Duke of Sussex’s autobiography has sold 750,000 copies across all formats – print, audio and e-book – in the UK since its publication on January 10

Meghan Markle had ‘gentle concerns’ about Prince Harry’s memoirs but ‘stayed in the shadows’ as he sparked media storm with US publicity blitz: Click here to read more 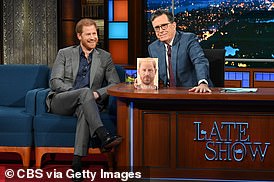 Since its release, Harry himself has admitted that he had made changes to the book.

The Duke told the Telegraph he chose to leave out several bombshells because he was concerned his father and brother would not ‘ever forgive’ him.

‘The first draft was different. It was 800 pages, and now it’s down to 400 pages. It could have been two books, put it that way. And the hard bit was taking things out,’ he said.

‘There are some things that have happened, especially between me and my brother, and to some extent between me and my father, that I just don’t want the world to know. Because I don’t think they would ever forgive me.’

But he warned the royals: ‘The way I see it is, I’m willing to forgive you for everything you’ve done, and I wish you’d actually sat down with me, properly, and – instead of saying I’m delusional and paranoid – actually sit down and have a proper conversation about this, because what I’d really like is some accountability. And an apology to my wife.’

The duke has faced a storm over Spare, which has driven an extraordinary wedge between him and the rest of his family.

Harry claimed he knew including details about intimate moments with his family would attract backlash – but ultimately decided he couldn’t truthfully tell his story without them.

There are other details, though, that he knew would cross the line if he published them.

These memories were shared with his ghostwriter only for context, and did not make the final cut. 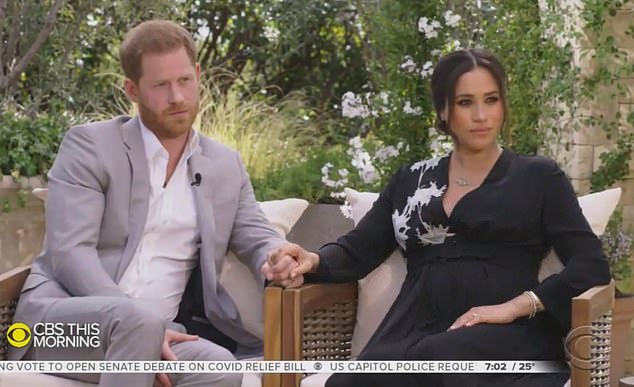 The royal couple typically put on a united front, with Prince Harry making an appearance at the end of his wife’s interview with Oprah Winfrey in March 2021. The couple are pictured during the Oprah interview 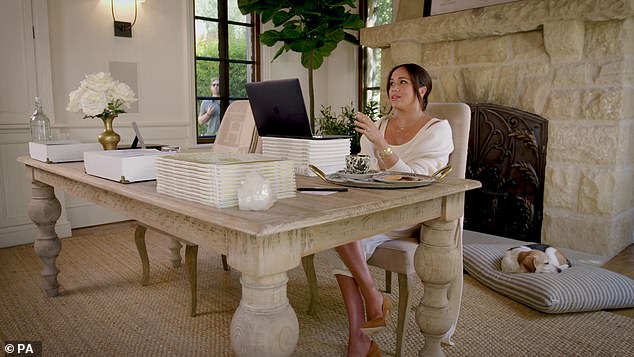 Harry and Meghan are said to have signed a four-book deal worth upwards of £16million ($20million) with publishing giant Penguin Random House.

He told the Telegraph that any chance of reconciliation with his family is ‘unlikely at the moment’, arguing that you don’t make friends – ‘especially within my family’ – if you talk about trauma.

He said: ‘How dare you talk about it, because that makes us feel uncomfortable.’

His message to the Royal Family is that while ‘you may not like me in the moment’, hopefully in five or 10 years’ time, ‘maybe you’ll thank me’.

The duke’s autobiography has sold 750,000 copies across all formats – print, audio and e-book – in the UK since its publication on January 10.

This makes it the biggest-selling memoir ever for its first week of publication, according to publishers Transworld, the UK division of Penguin Random House.

The Nielsen data shows the book has broken the previous record of 210,506 set by the first Pinch Of Nom cookbook by Kay Allinson in 2019.