Having a fright out! Halloween revellers have a scarily good time heading to pubs and clubs in fancy dress outfits

Halloween revellers across the UK showed off their spooky streaks on Sunday as they hit the nation’s pubs and clubs in style.

Ghoulish face paint, blood red lips and vampire teeth were still the order of the day as partygoers defied the bad weather for some light-hearted fun and frills.

Thousands of young people made up for lost time after many celebrations were cancelled last year due to the Covid pandemic. The UK entered a second lockdown on November 5, 2020, but swathes of towns and cities were already in Tier 2 restrictions – curtailing the chances for nights out. 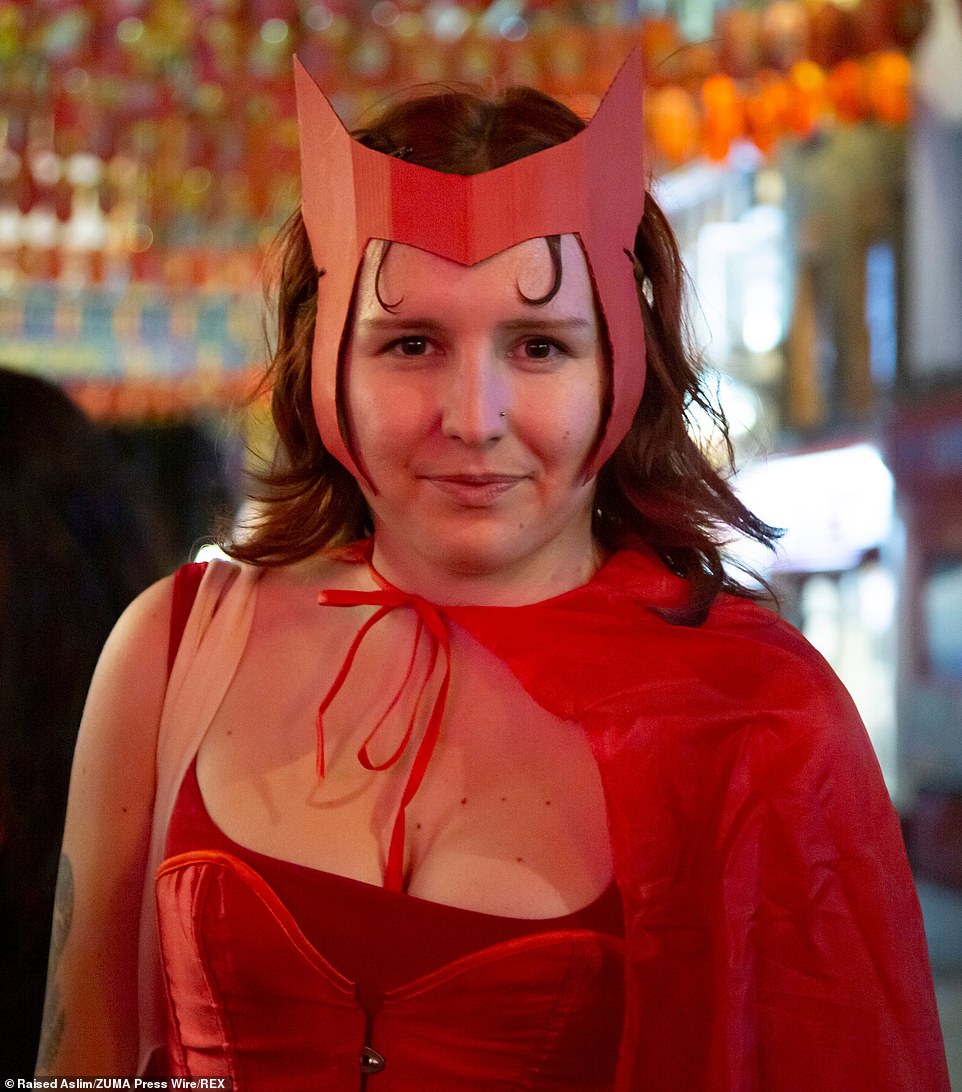 In London, this young woman dressed up in scarlet with a devilish tiara to match as she hit the streets for Halloween 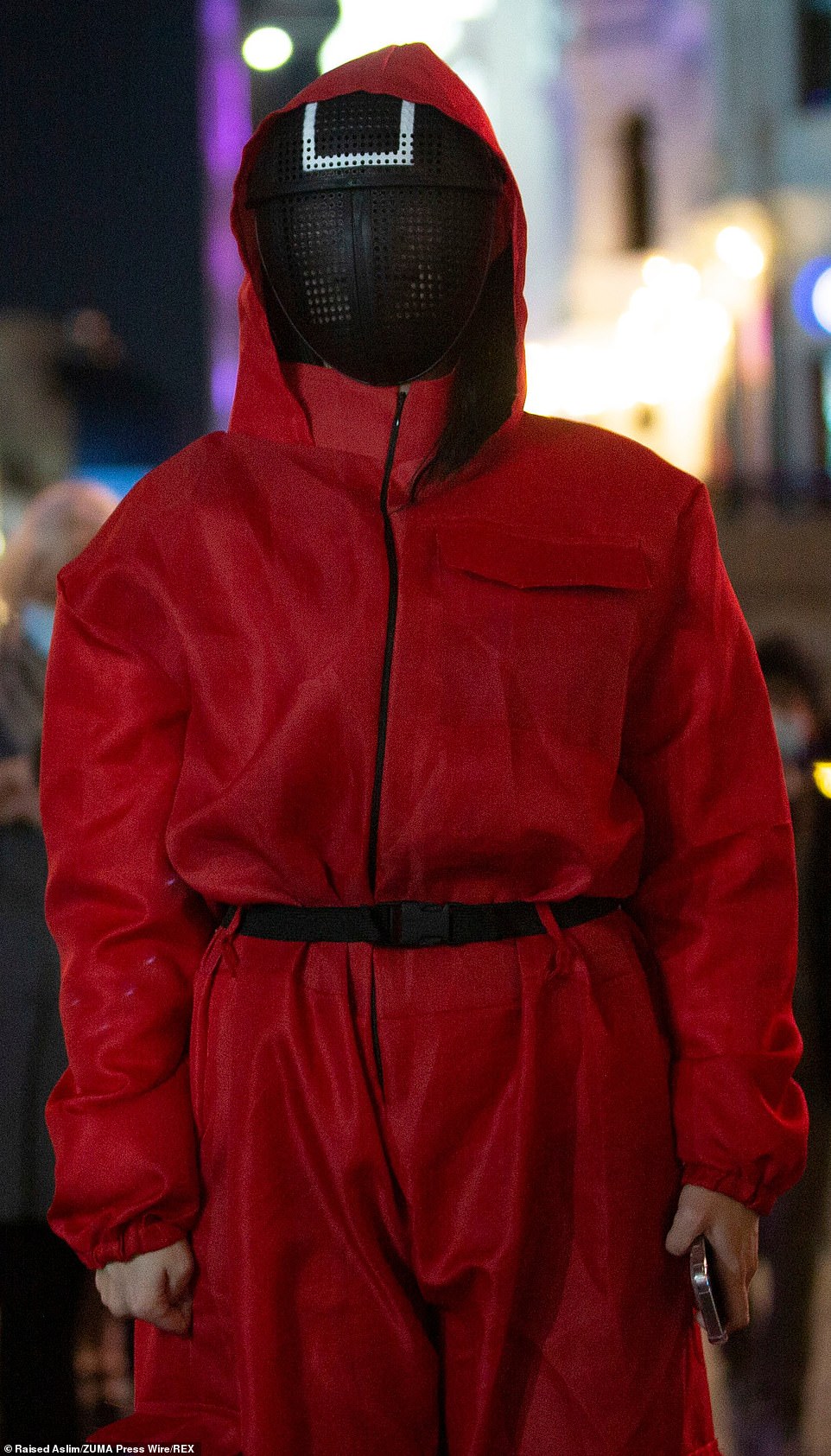 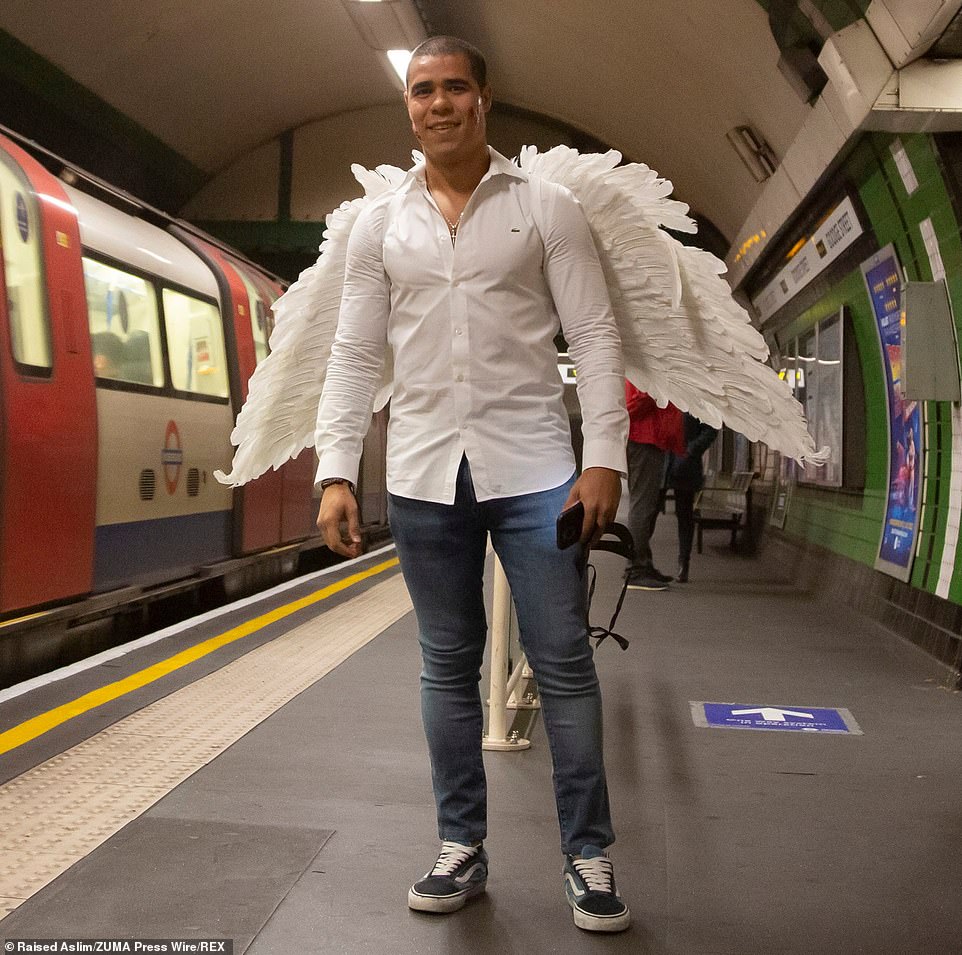 It wasn’t all demons and gore, as this traveller on the tube showed off his angel wings for the camera 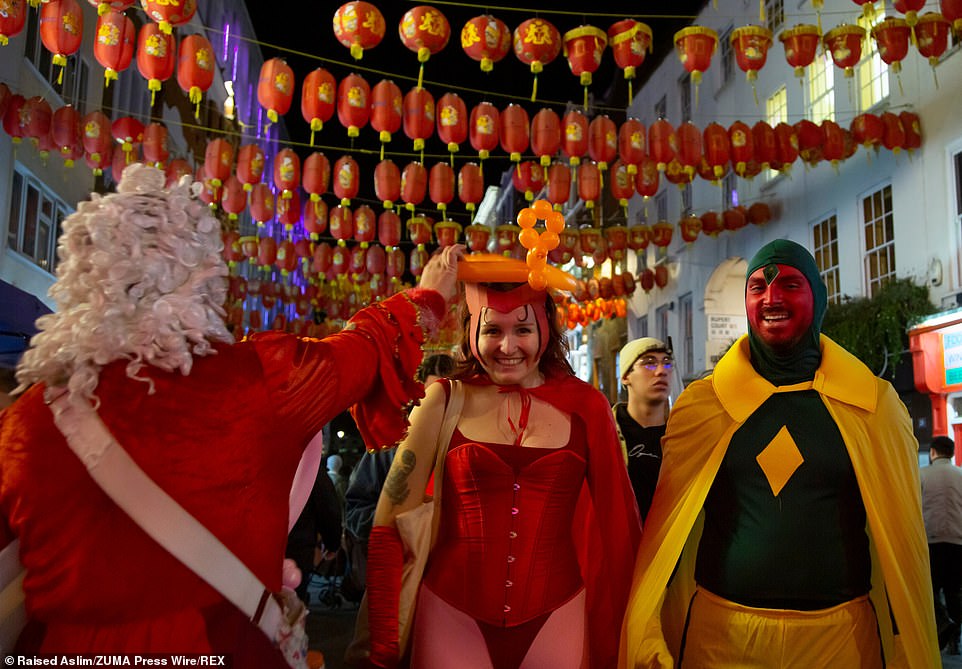 In London, partygoers donned science fiction-inspired costumes as the walked underneath hundreds of Chinese red lamps

In London, young people wore all sorts of bombastic outfits – many of them inspired by science fiction and hit shows such as Netflix’s current ratings winner Squid Game.

It wasn’t all demons and gore either, as some let their angelic side shine through – including a traveller on the tube wearing bold angel wings.

Others let their creativity flow free with costumes only loosely based on Halloween, with bunny rabbits and bridezillas happily joining the throngs of partygoers. 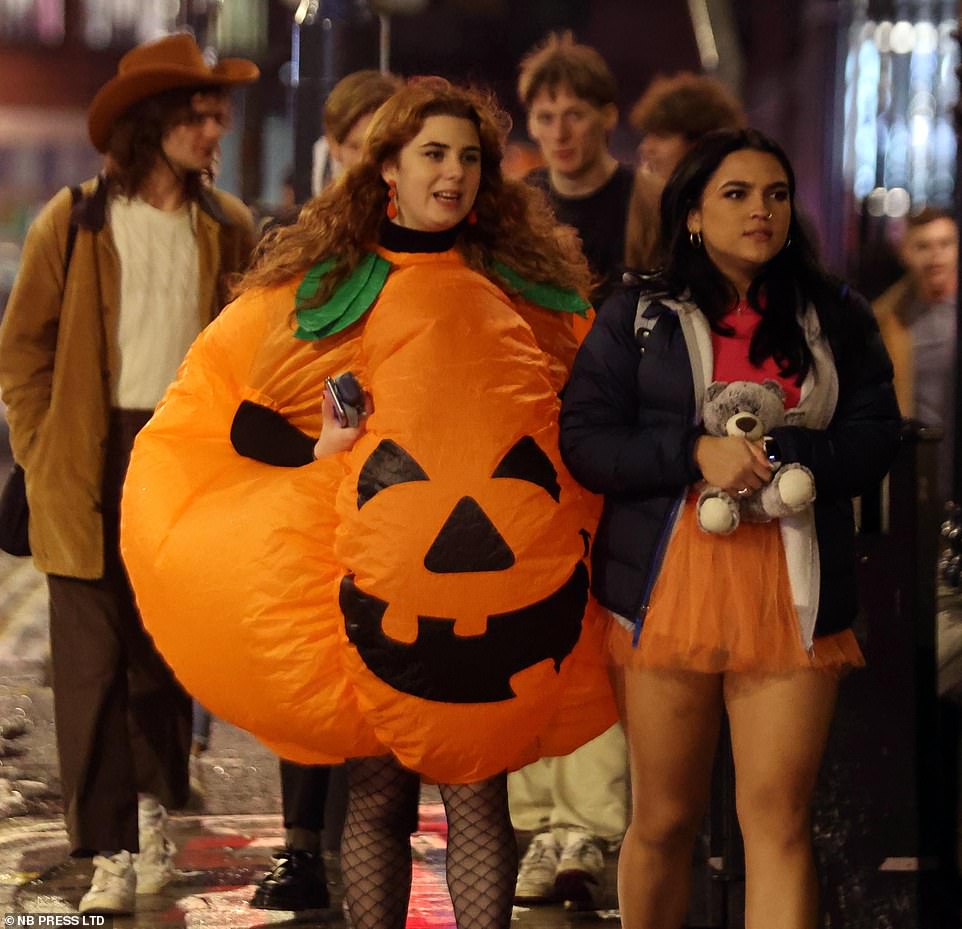 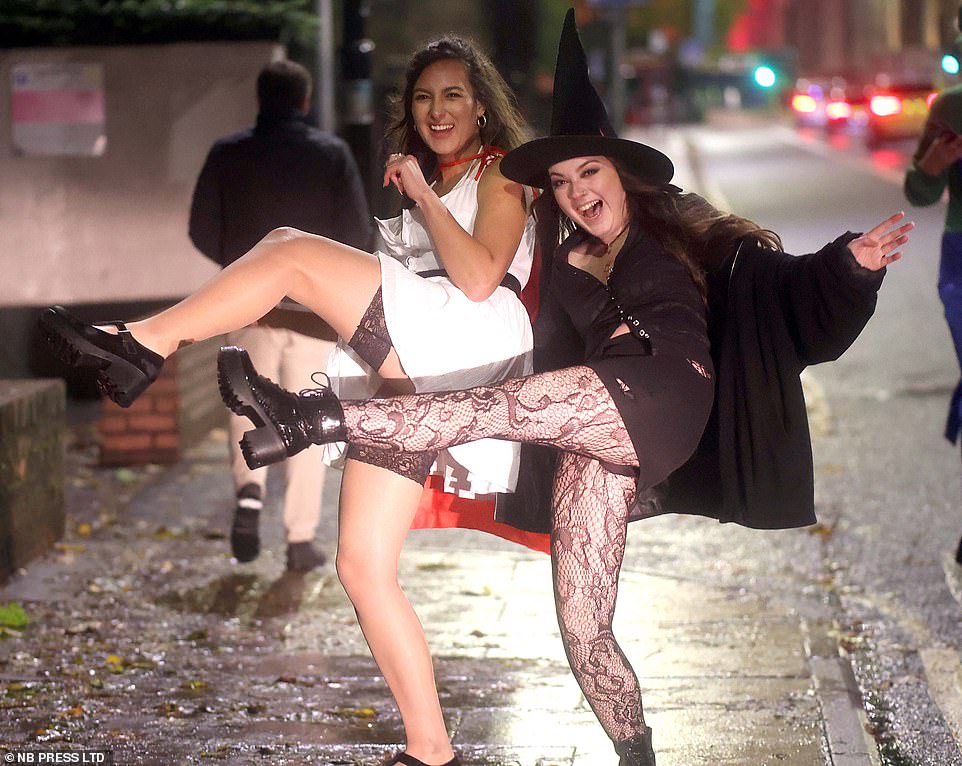 Elsewhere in Leeds, the party spirit broke out in the street with this can-can dancing witch and her equally happy sidekick 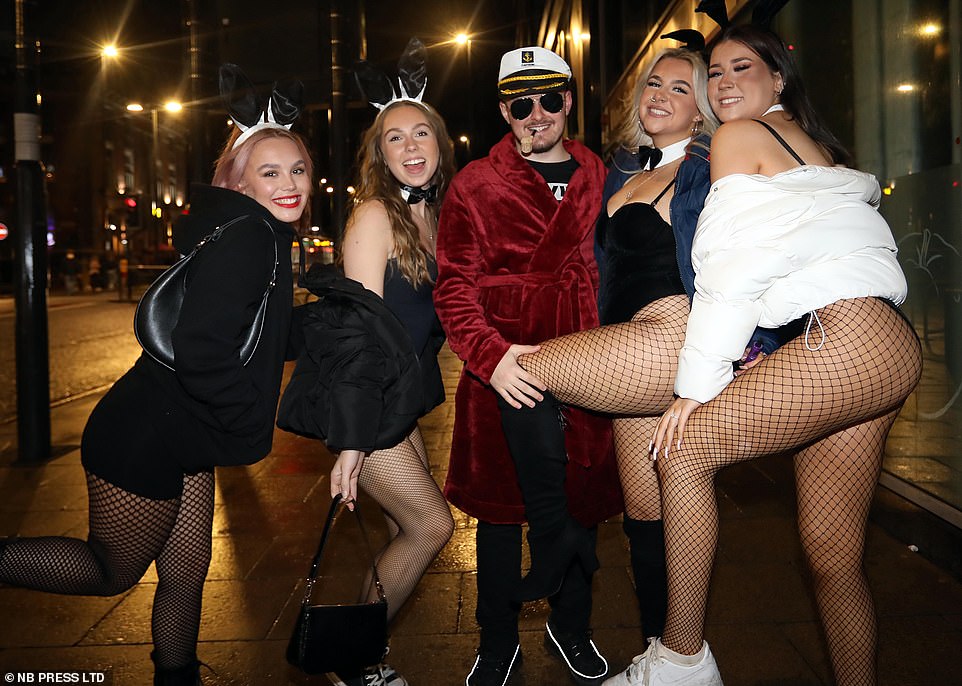 In Leeds, no amount of hellish bad weather was going to put off hundreds of university students who crowded the city’s bars in fancy dress.

Steampunk boots and corsets was a popular combination of the night along with leopard print leotards and other outfits perfect for the dance floor.

And while some remembered to take their umbrellas out with them, others made do by hiding from the rain under carrier bags! 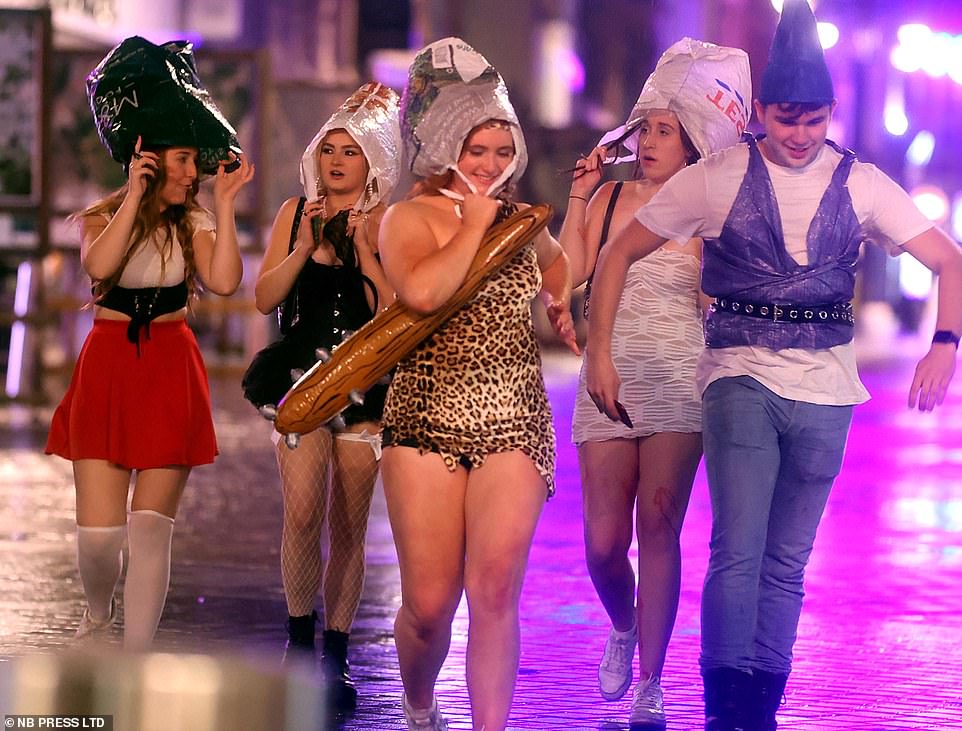 While some students remembered to take their umbrellas out with them, others made do by hiding from the rain under carrier bags! 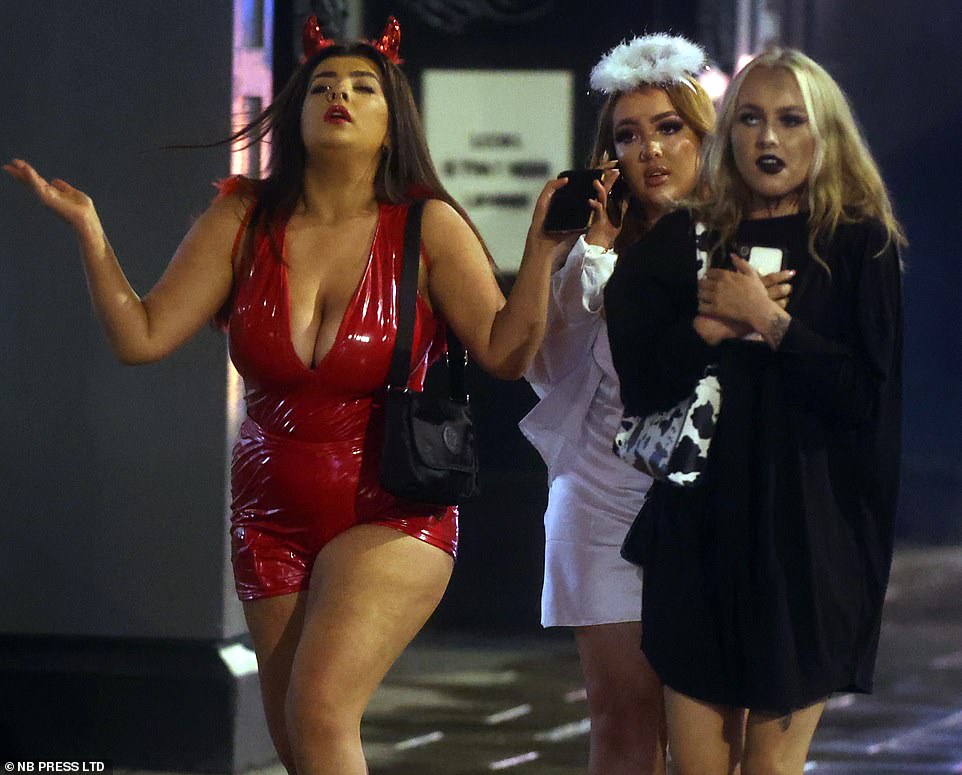 ‘What’s the big idea’: This devil gal and her pals made sure they were on fine form partying in Leeds for Halloween 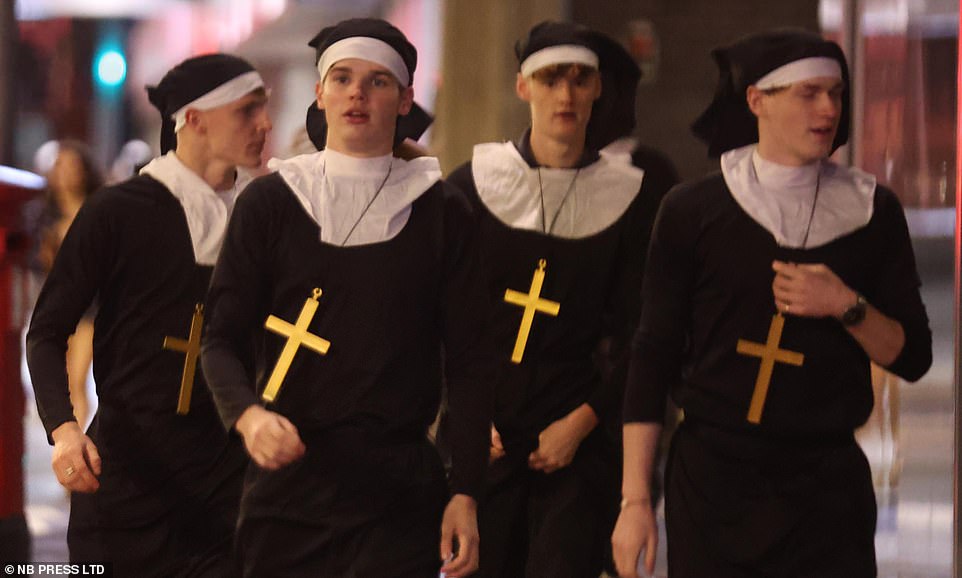 ‘Sisters of mercy’: This group of young men dressed up as cheeky nuns as they celebrated Halloween in Leeds 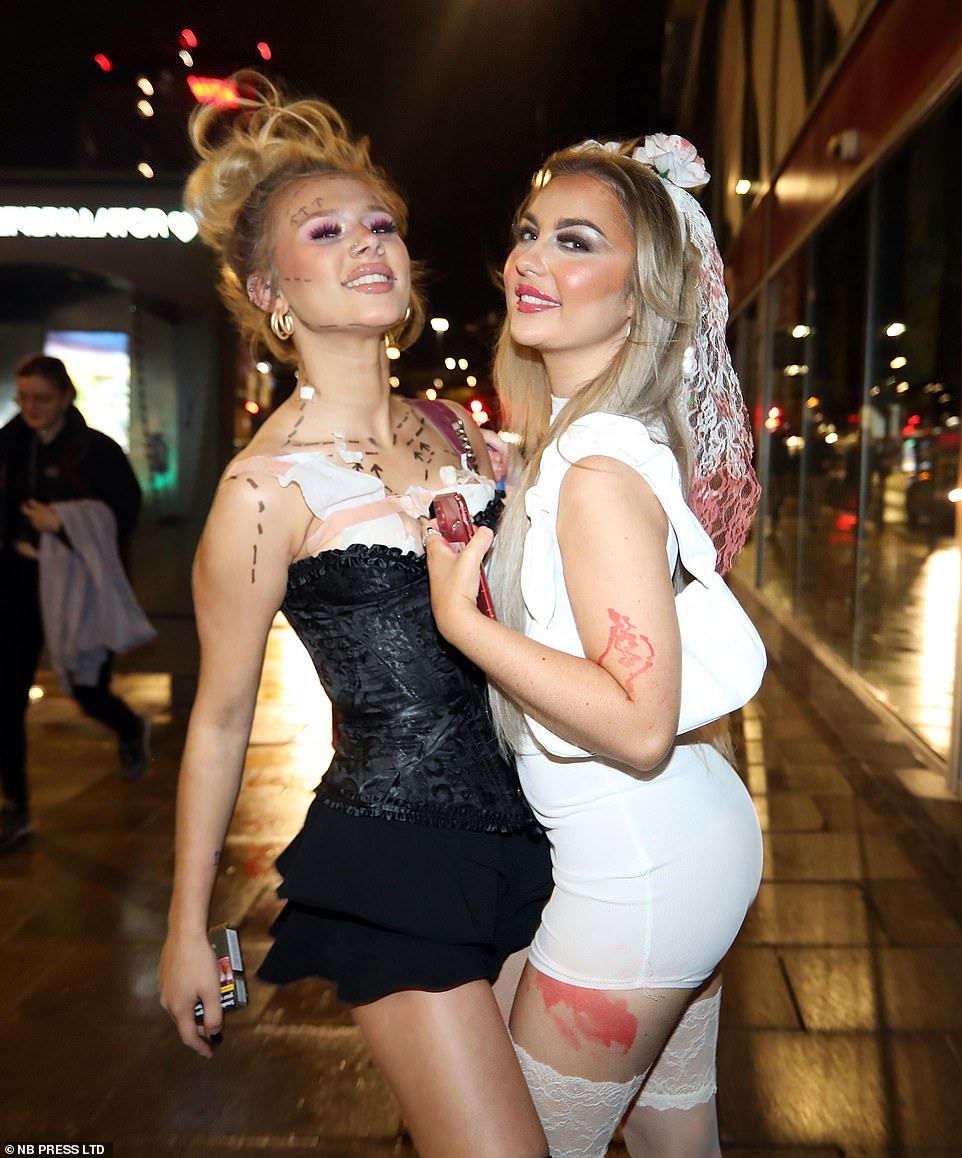 ‘Dressed for a wedding or a funeral?’:  These two girls in Leeds wore cinched corsets in contrasting black and white as they partied in Leeds

Thousands of people hit the bars and clubs in Portsmouth, Hampshire along Guildhall Walk with many dressed up for Halloween on Saturday night.

The most popular venue was the Astoria Nightclub and adjoining Mr Miyagi’s bar which had over 2000 people pack them out, including Love Island star Demi Jones and her pals.

There were many police patrolling the street with long queues to get into the venues, with people behaving themselves.

The most popular drink at the Astoria is Redbull Vodka, five pallets of Red Bull were delivered for the weekend, a whopping 17280 cans and hundreds of bottles of Vodka for Halloween.

The Astoria and Mr Miyagi’s bar had Drug Detection dogs, checking customers as they entered 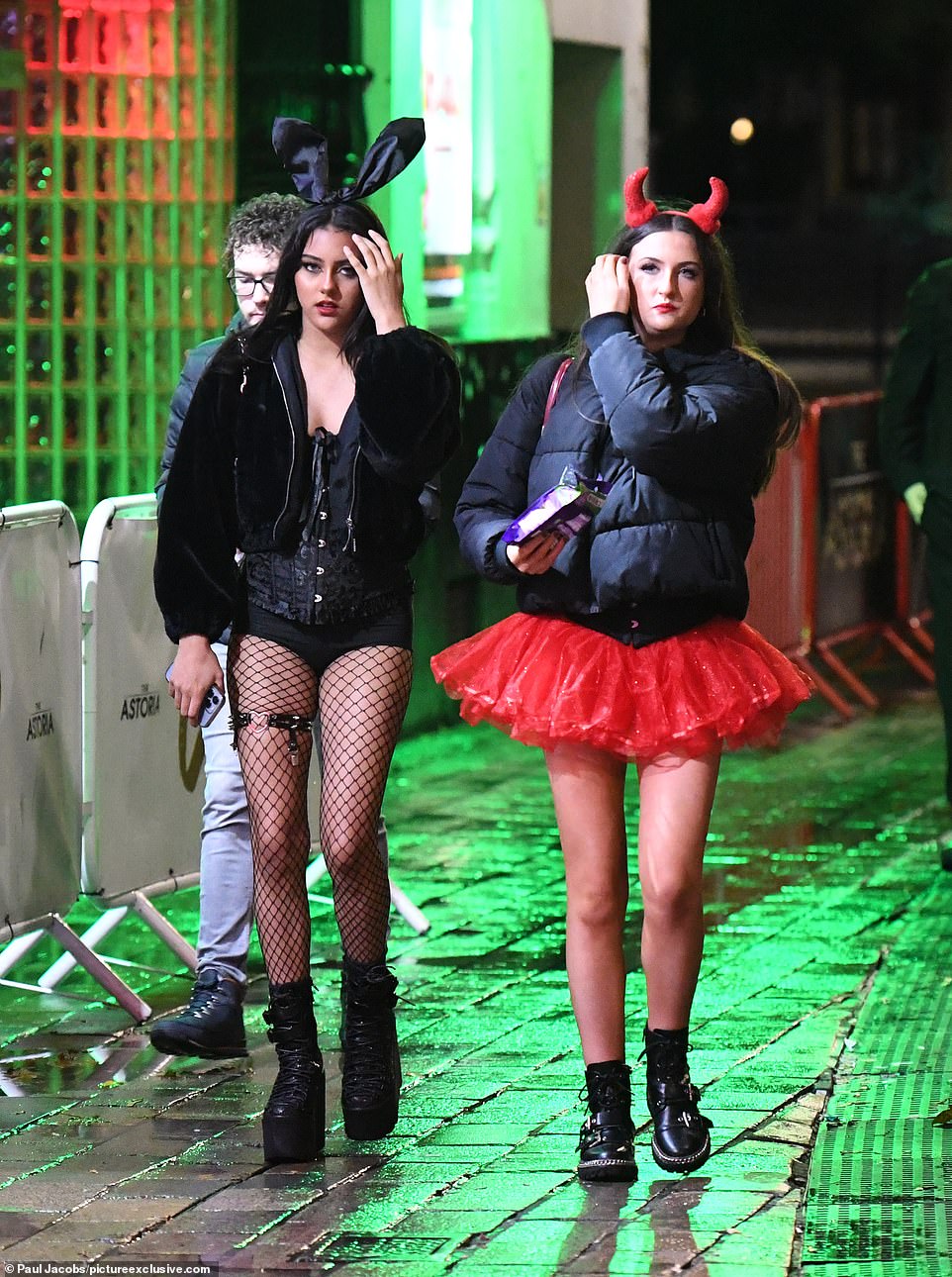 In Portsmouth, thousands of University students hit the bars and clubs, including these two girls dressed as a punk bunny and devil treading along Guildhall Walk 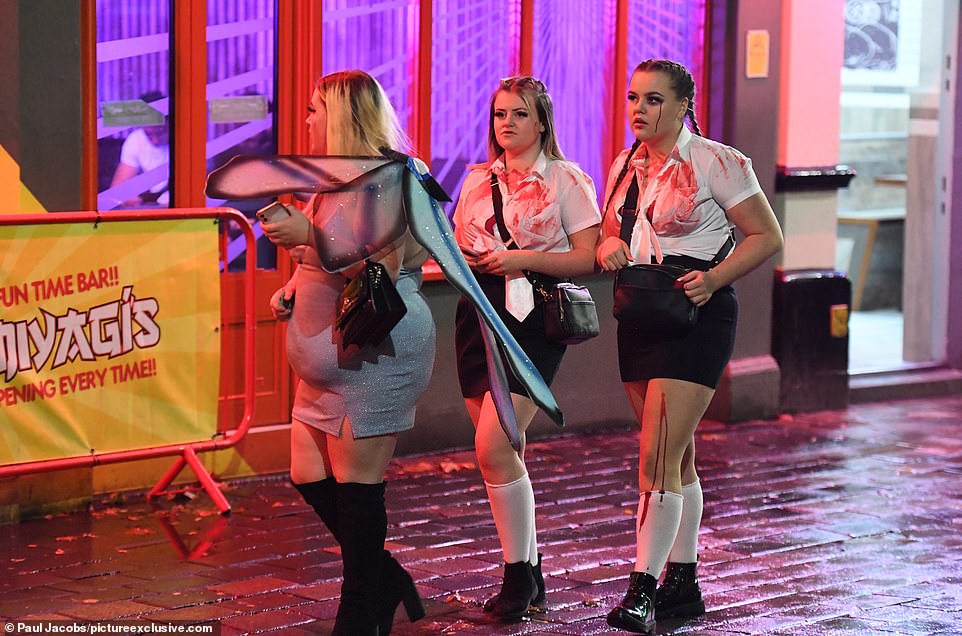 In Portsmouth, the most popular venue was the Astoria Nightclub and adjoining Mr Miyagi’s bar which sold over 2000 tickets for the night 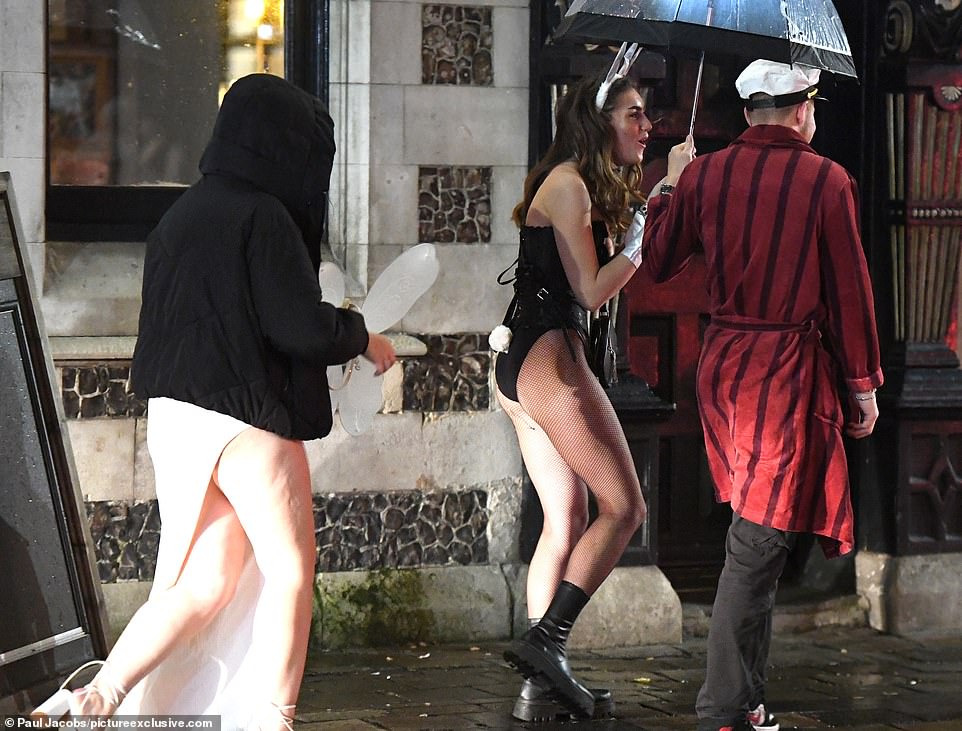 Students in Portsmouth took umbrellas out with them to shield from the rain, while wearing zany outfits for Halloween 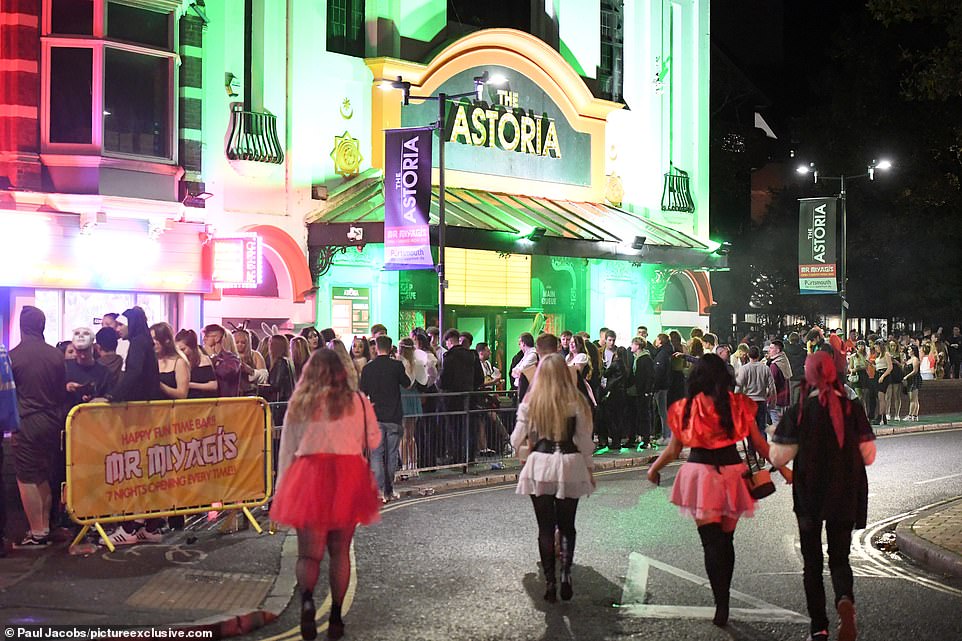 The most popular drink at the Astoria in Portsmouth is Redbull Vodka. Five pallets of Red Bull were delivered for the weekend, a whopping 17,280 cans and hundreds of bottles of Vodka for Halloween. 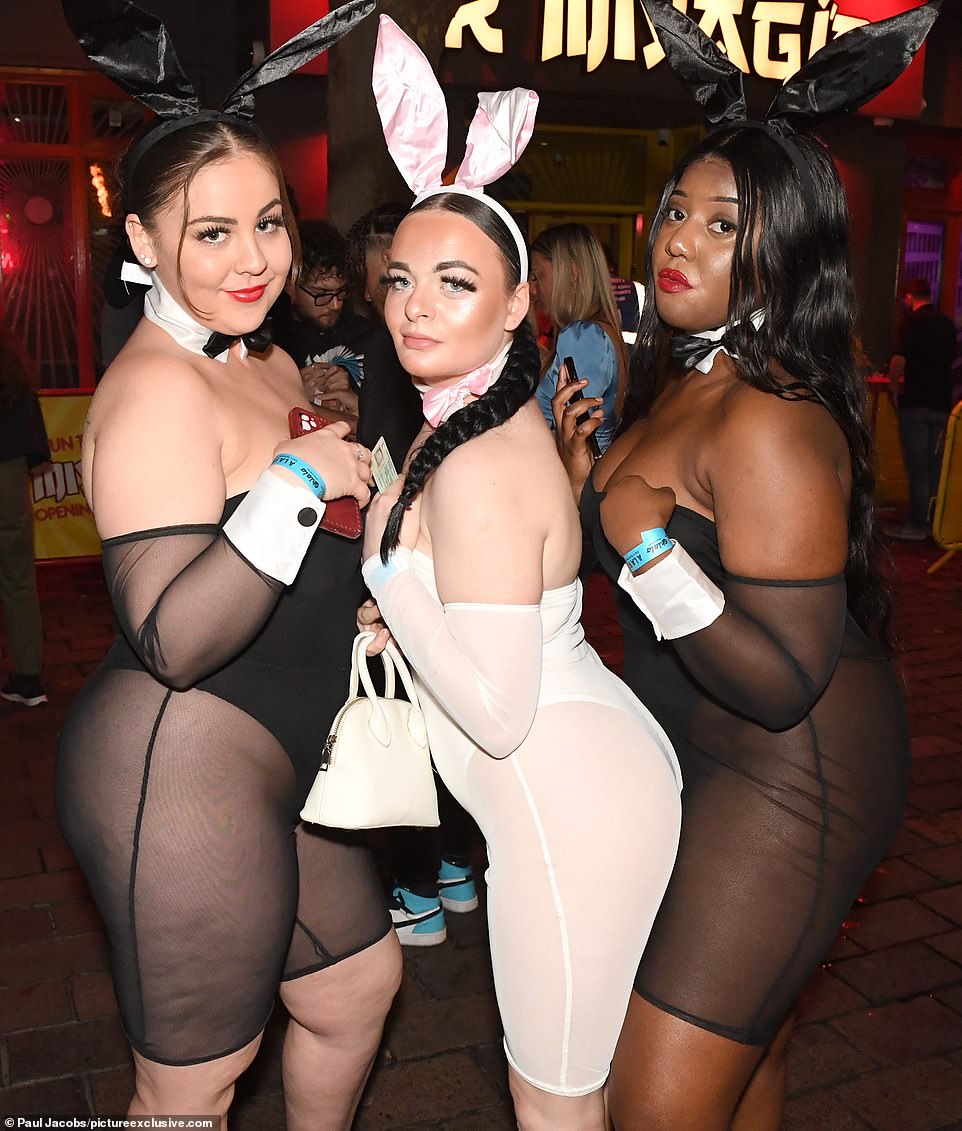 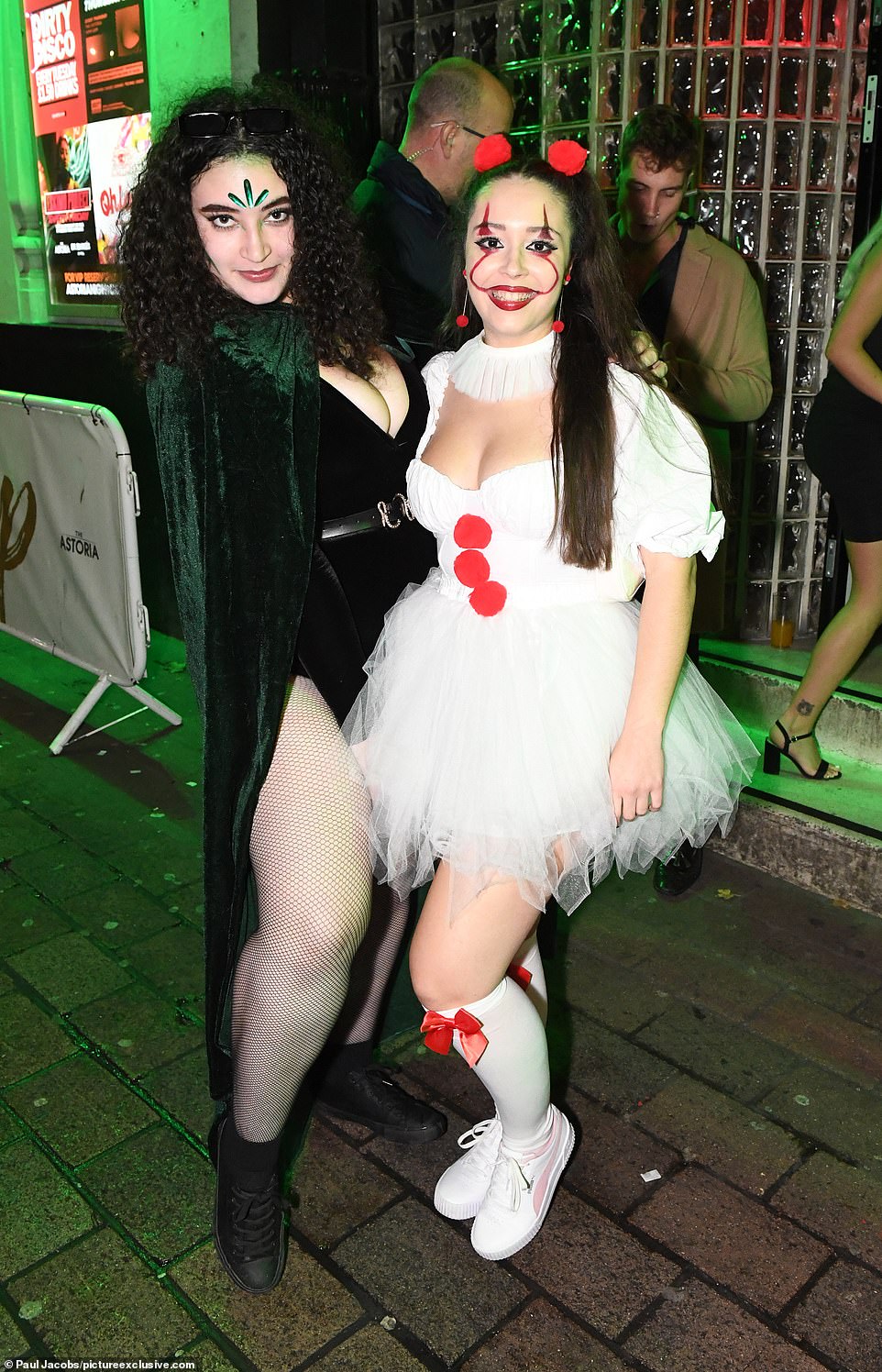 Beloved characters from Disney and other fairy tales were a popular theme of the night, including the Queen of Hearts 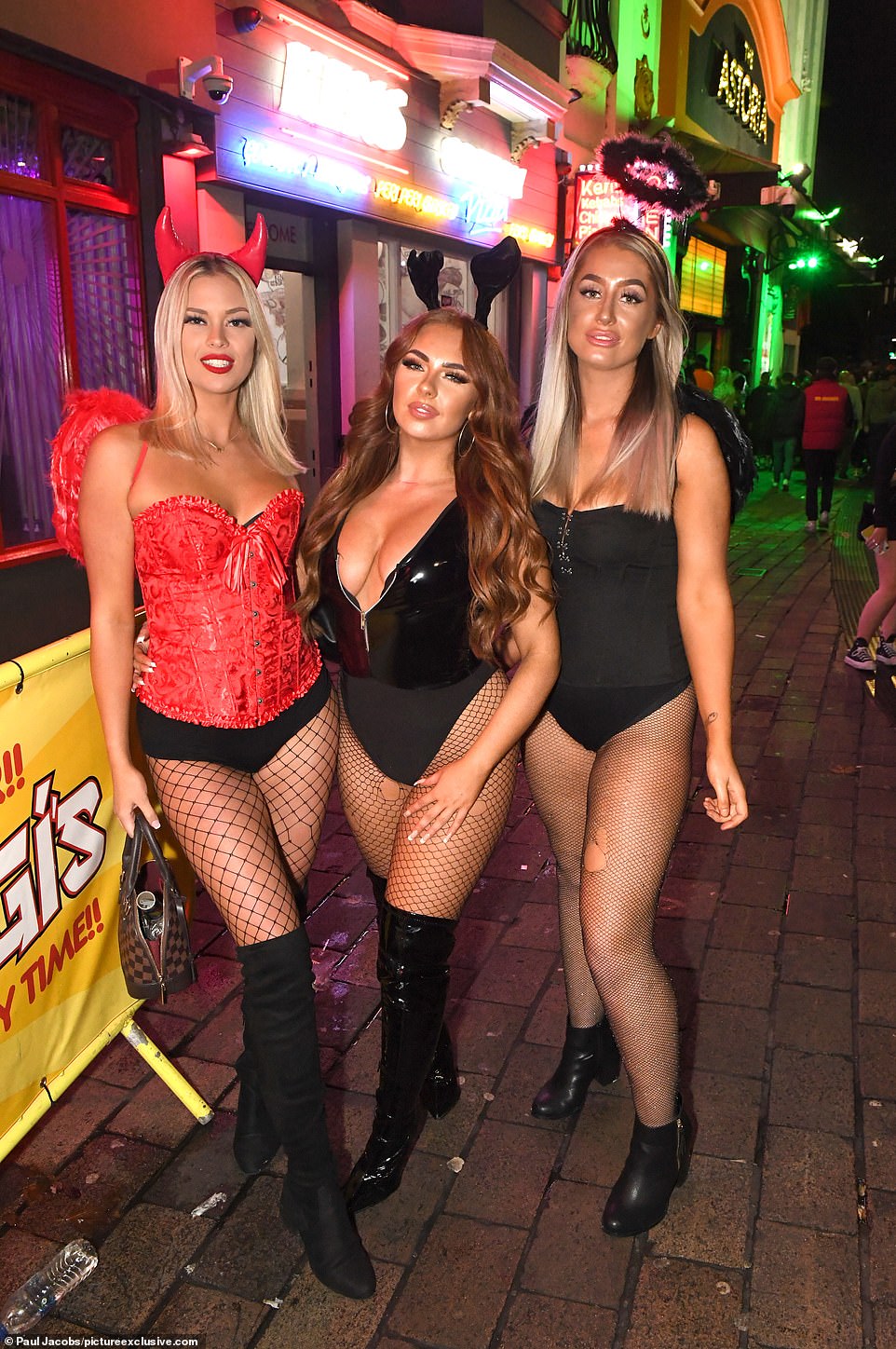 Love Island star Demi Jones (centre) and her pals, Hollie Goward (left) and Megan Norton (right) were among the many partygoers out in Bristol for Halloween

In Londonderry, Northern Ireland, thousands of spookily-clad spectators turned out for the city’s three-day Halloween festival.

It culminated in a spectacular finale on Sunday, with drummers reminiscent of the Emerald City in the Wizard of Oz giving a banging encore perfomance to end the party.

Other showed off their creative instincts by dressing as Native American chieftans and even a family of skeleton pirates. 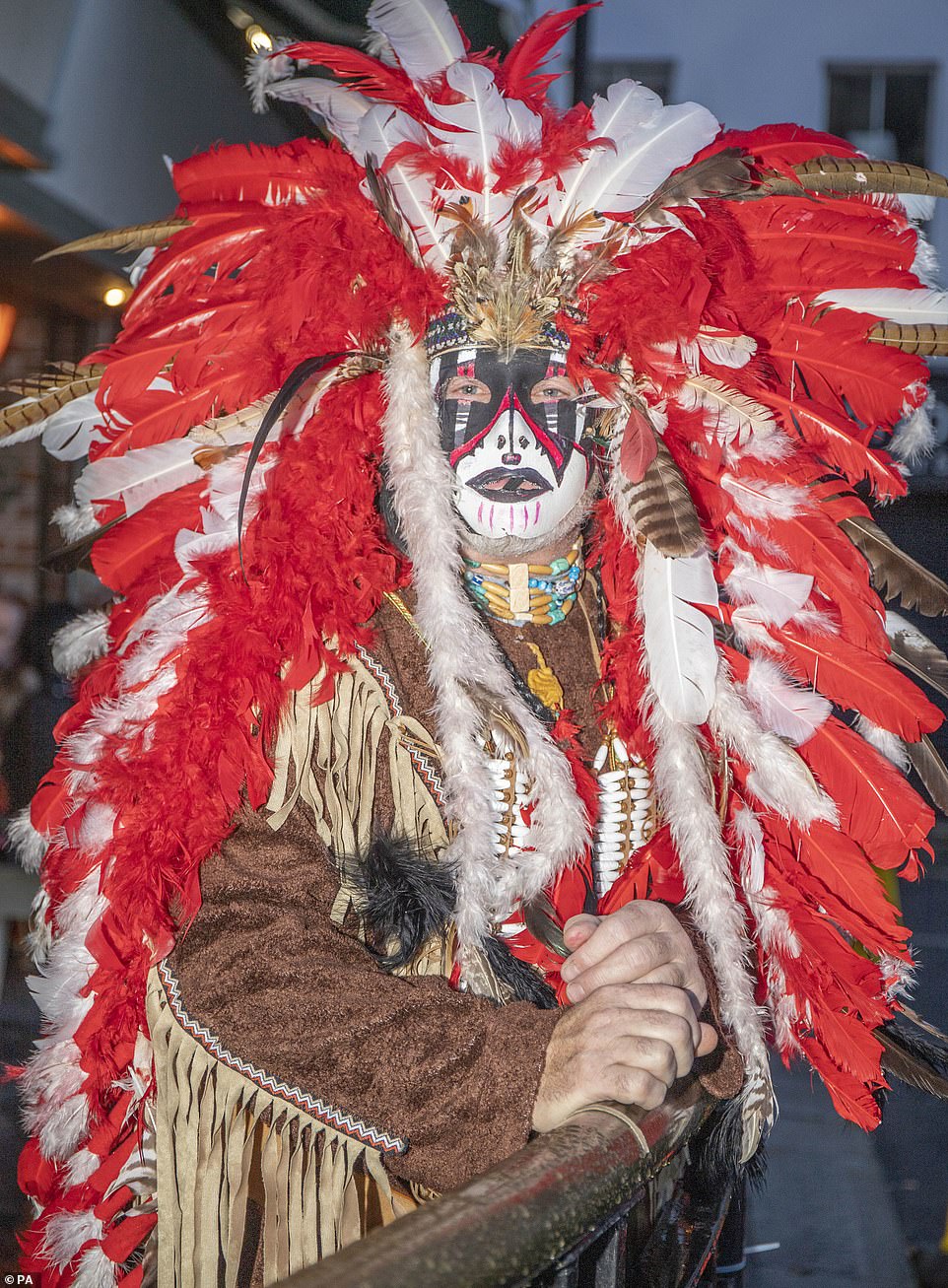 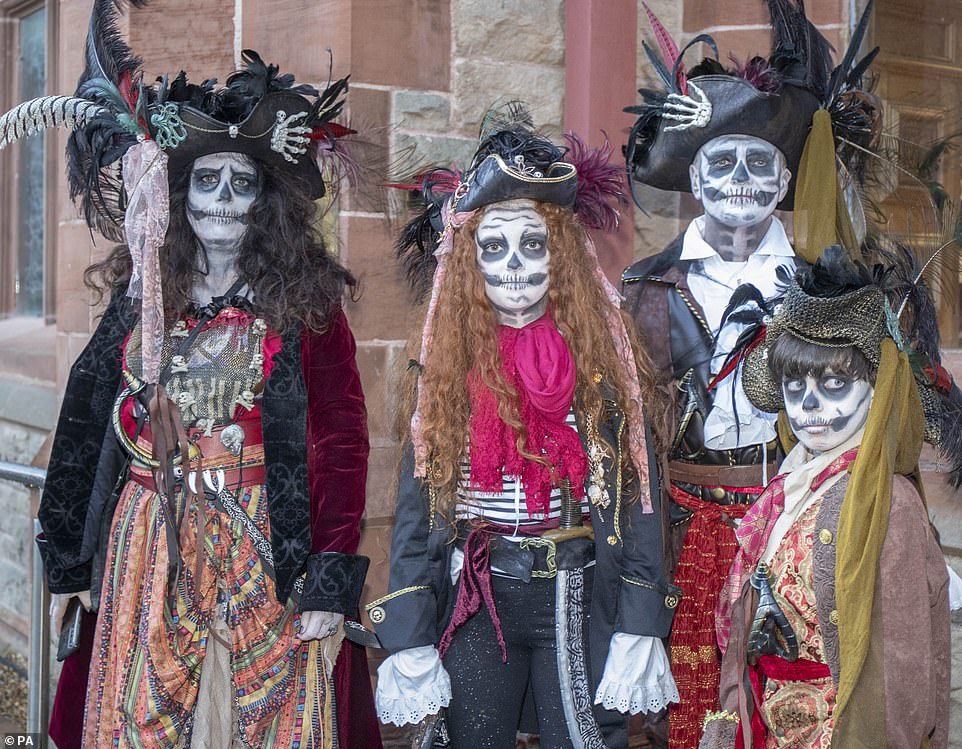 The Margey family from Letterkenny, County Donegal, dressed as skeletal pirates for the Halloween festival in Londonderry 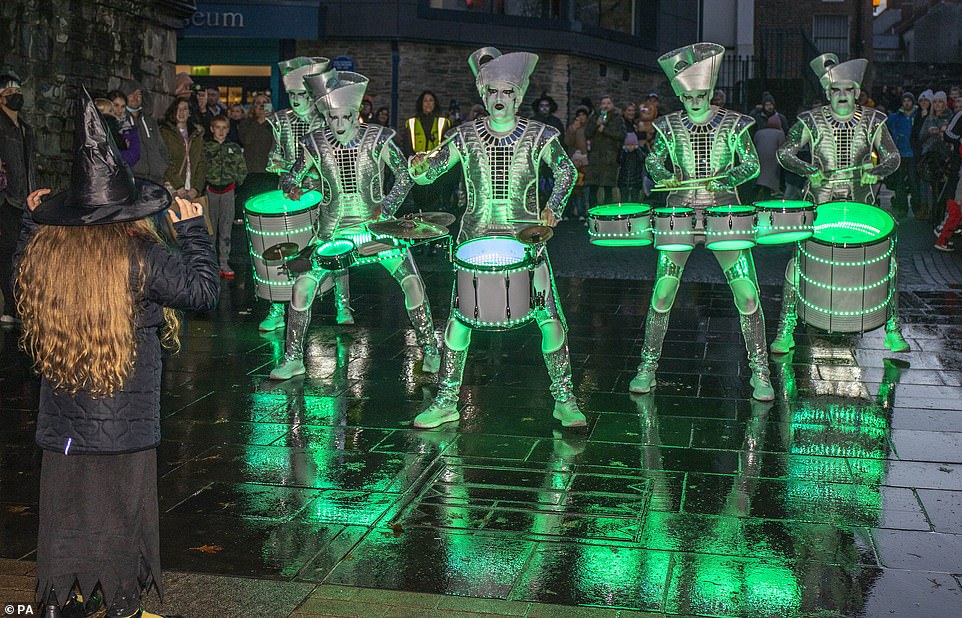